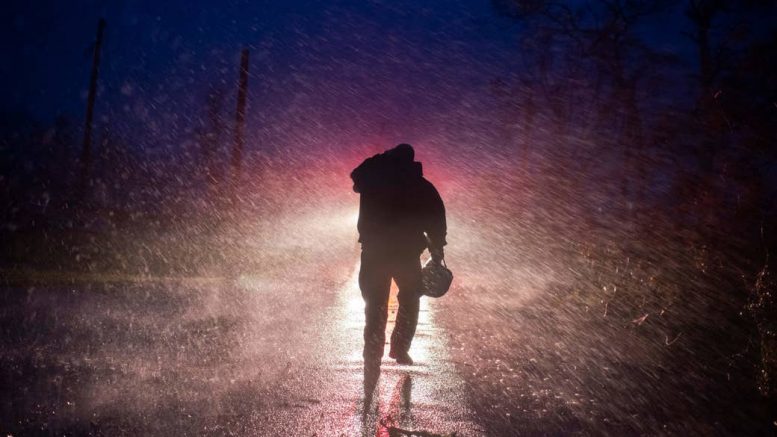 Montegut Fire Chief Toby Henry walks back to his fire engine in the rain on Aug. 29, 2021 as Hurricane Ida passes (AFP via Getty Images/Mark Felix).

From August 26 through September 4, 2021, Hurricane Ida struck Louisiana from the Gulf of Mexico. To provide some scope on its power, its strength was comparable to Hurricane Katrina, which killed an estimated 1,170 people and tied Hurricane Harvey for the costliest catastrophe in US history.

Louisiana has now become the first state to experience back-to-back years with hurricane winds of 150 mph or greater. Even more surprising, unlike other tropical storms, Ida did not slow down quickly after impact. It remained a Category 4 storm for six hours after making landfall.

The Saffir-Simpson scale, which is used in the North Atlantic Ocean, has categories ranging from 1 to 5. The change in damage from a Category 1 to a Category 2 or 3 hurricane is generally assumed to be linear, although it is logarithmic. A Category 4 at 150 mph, however, has more than 250 times the damage potential of a Category 1 at 75 mph.

Flooding was a major concern for Louisiana residents in addition to the high winds. New Orleans already received over 65 inches of rain this year before the hurricane, making it the second wettest year on record at that point. The city of New Orleans receives 62 inches of rain each year on average. Ida brought 4.73 inches (120mm) of rain to New Orleans on landfall day. With four months left in the year, New Orleans could likely have its wettest year on record. After wreaking havoc on the Gulf Coast, Ida moved on to the Northeastern states, bringing massive amounts of rain in a matter of hours.

The leftover moisture and energy from Hurricane Ida combined with a front over the Northeast on September 1st and early September 2nd created catastrophic flooding. Flemington, New Jersey recorded the highest rainfall total of 11 inches, although areas of southeast New York, Pennsylvania, Massachusetts, Connecticut, and Rhode Island received more than 6 inches. On the evening of September 1st, Central Park in New York City received 3.15 inches of rain in a single hour, Central Park’s heaviest one-hour rainfall ever recorded. The total rainfall on September 1st was 7.13 inches, making it the seventh wettest day in New York City since 1869.

According to statistics from PowerOutage.us, more than 850,000 households and businesses in Louisiana and Mississippi were still without power on August 27th after Hurricane Ida made landfall. The storm destroyed 30,679 poles, 36,469 wire spans, and 5,959 transformers in both states, according to Entergy. Luckily, Entergy Louisiana successfully restored power to more than 90% of all customers who lost electrical service after 15 days of restoration operations.

Over the decade, storms have become more intense on average, according to research, in part because the seas are becoming warmer as a result of human-caused greenhouse gas emissions. Hurricanes are also growing wetter as the atmosphere warms, with experts claiming that storms like Hurricane Harvey in 2017 generated more rain than they would have without human-caused climate change. Rising sea levels are also leading to greater storm surges, which are the most dangerous part of tropical storms. Hurricanes like Ida will become increasingly prevalent in the future.

After a $14.5 billion investment in storm protection approved by Congress in the aftermath of Hurricane Katrina, the levee system is substantially stronger today. After previously stating that the state’s storm protection system was “designed for this time,” Louisiana Governor John Bel Edwards said on August 30th that it functioned “very well.” If previous disasters are any indication, the government’s continued reaction to the storm, including its long-term implementation, will influence Louisiana’s recovery and resilience to future hurricanes.

Hurricane Season 2020, the One Normal Thing About This Year

Be the first to comment on "Hurricane Ida’s Impact"