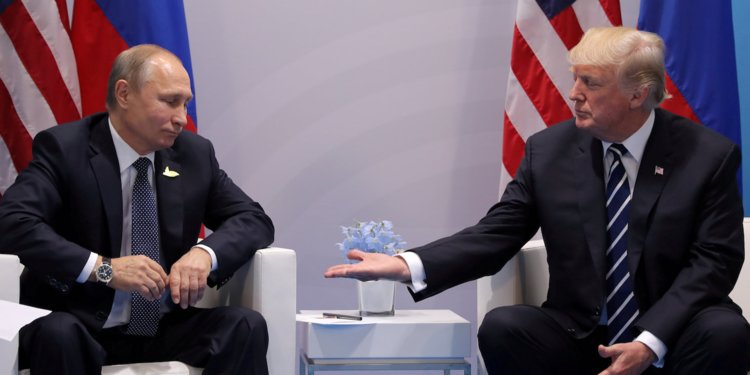 After meeting with Vladimir Putin at the Helsinki Summit, Donald Trump returned to the US to be greeted by the hornet’s nest of media reporters and politicians condemning him for his statements denying Russian interference in US elections. Former CIA director John Brennan lambasted Trump claiming that his statements were “Nothing short of treasonous”.

But The New York Times definitely takes the cake for hyperbolic Trump-Russia rhetoric with its cartoon depicting Donald Trump and Vladimir Putin in a romantic relationship. Although the cartoon is satirical in nature, the implication is still clear: Trump is “Putin’s Puppet”.

Despite the “Putin’s Puppet” allegation being spewed by the media, reality indicates that what Trump says and what his administration does are two entirely different things. Although Trump’s statements at the Helsinki summit contradict intelligence agency information, the President is not “Putin’s Puppet” because his administration’s policies towards Russia have been very strong and in direct contrast to Russian interests

The Trump administration increased funding for the European Deterrence Initiative which expands US security forces in Europe to deter Russian aggression. Trump has supplemented this funding by authorizing the delivery of lethal weapons to Ukrainian soldiers fighting Russian troops, a move that President Obama refused to do due to fears that it would inflame tension between the US and Russia. The fact that Trump gave authorization to perform this action shows that he has been quick to mobilize US forces to counter Russian military expansion.

And US forces have not only countered Putin’s forces in Europe. In February 2018, US airstrikes in Syria killed Russian mercenaries after they advanced on land held by Syrian Democratic Forces. The Kremlin responded claiming that the Russians killed were not traditional soldiers, but the point still stands. Under the Trump administration, the US has had multiple instances of military aggression towards Russian forces.

The laundry list of strict policies stretches beyond military action as well. While politicians call on Trump to implement more sanctions, the Trump administration has already implemented sanctions on 213 Russian-related entities since January 2017.

Additionally, Trump has repeatedly called on the EU to stop the Nordstream 2 project, a pipeline providing Germany with Russian gas, and has even started exporting natural gas to the EU claiming that they should not be overly dependent on Russia for its energy resources. Through this policy, the US is acting as a direct competitor to Russian energy exports which decreases Russian influence over the EU.

When analyzing all of these aggressively anti-Russia policies, it becomes clear that the Trump administration has done a lot to harm Russian interests through economic, military, and foreign policy. Those in the media who argue that Trump is “Putin’s Puppet” are simply being willfully ignorant of all of the substantial steps the Trump administration has taken to curb Russian influence globally.

Trump’s Performance at the Summit

In response to the argument about policy, many Trump critics claim that his poor performance at the summit hurts US foreign policy interests.

While Trump’s performance at the summit was certainly inadequate, history reveals lessons where discourse between leaders aided in repairing US-Russia relations. One example was the 1961 Vienna Summit between John F. Kennedy and Nikita Khruschev. During the discussion between the two leaders, Khruschev cunningly painted the United States as weak citing the failed Bay of Pigs Invasion to prove his point. Kennedy exacerbated the discussion by, at one point, admitting that the USSR was a world power whose strength rivaled the power of the US. Although Kennedy failed to gain anything from the summit, he learned many lessons from the summit and was able to negotiate with Khruschev just a few years later to avoid nuclear armageddon in the Cuban Missile Crisis.

Trump is certainly no JFK, but the point is that both leaders, although they made serious errors during their respective summits, used discourse as a means to encourage peaceful relations between the two nations. Ultimately, diplomacy is a much better form of foreign policy than calling for repeated rounds of sanctions after sanctions have already been implemented.

But with all that being said, there still remains one question. If Trump really isn’t under Putin’s control, then why does Trump praise Putin?

One explanation is that Trump and Putin share similar leadership styles. Both are highly nationalistic leaders who are also critical of allowing refugees to enter their countries. In fact, Putin’s head of Russian Migration Services stated that, “multiculturalism has failed [the EU]” and that “differences in culture, religious traditions, and customs” have led refugees to reject Western values, a statement that resonates with Trump’s “America First” message.

Despite the narrative that members of the media are constantly pushing, Trump is not Putin’s puppet. When Trump repeatedly attacks the media, it’s no surprise that 80% of media coverage of Trump is negative. However, the key to wiping away bias of any kind, including anti-Trump media bias, is simply to diversify your news sources. Read a pro-Trump article one day, but read a far-left article the next. Find a center-right commentator/news source you enjoy, and then find an article that disagrees with that commentator. This will help you have more fact-based opinions.

This article can be found at United 4 Social Change.

Be the first to comment on "Words vs. Actions: Why Trump Is Not “Putin’s Puppet”"