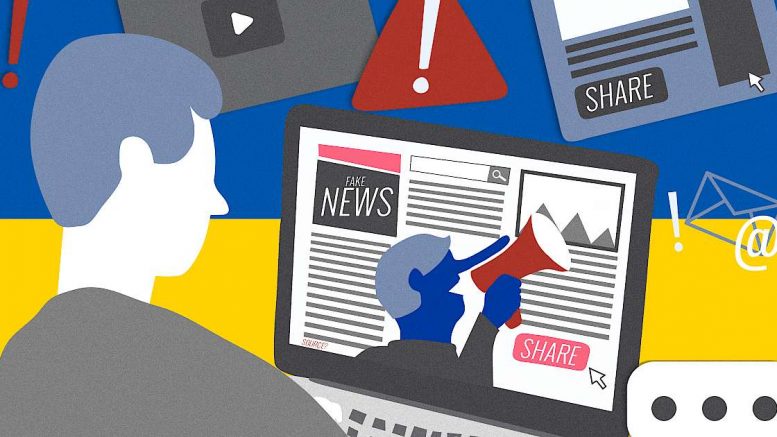 Disinformation about the war in Ukraine abounds | Source: CREST Research

Disinformation has complicated the war in Ukraine from the start. Russia has turned its efforts towards diverting people’s, attention—particularly its own citizens’—from what it calls a “special operation” in Ukraine. The bulk of the Russian media either downplays the invasion or twists it into a service in Ukrainian interest. Still, the false information has not come without retaliation from both within and without. A handful of Russian media outlets that contradict the Kremlin narrative, and Ukraine has been quick to use social media platforms to advocate for itself. As the Kremlin cracks down on the spreaders of “knowingly false information” and the fighting in Ukraine continues, disinformation becomes increasingly pervasive.

War in Ukraine & The Russian Media

Russian news outlets have employed a variety of means in denying the existence of war in Ukraine. “Don’t call it a war” is a common one. Tight with the Kremlin, popular Russian news sites (Gazeta and Lenta, for example) simply do not mention war. They refrain from using the word itself and similar terms like “attack” and “invasion.” Gazeta, for instance, has broadcast and published daily updates on the Russian “special operation” in Ukraine. Lenta goes a step further: its March 4th homepage makes no reference to any special operations, and though it does feature headlines about Ukraine, these vilify the country (“Ukrainian sailor detained in Russia on suspicion of calling for extremism”) and appear among innocuous headlines such as “Shark meat found in pet food,” or those claiming that it is Russia that is the victim of foreign disinformation (“Rozkomnadzor (the Russian state censorship agency) blocked Facebook in Russia”).

On both sites, turning the war on its head is a common theme. Russia is, as they present it, either helping Ukraine, or the victim of Ukraine. As far as the former goes, Lenta recently posted an article about Russia’s “demilitarization and denazification of Ukraine.” The outlet cites Vladimir Putin’s announcement that a “special military operation” would be conducted in the country and links to another article, which explains that this operation is “to protect Donbass.”

Donbass, a separatist-controlled region in southeastern Ukraine, is occupied by Russian forces. Maria Zakharova, Russia’s Foreign Ministry spokesperson, wrote via Facebook post that the Ukrainian government has been carrying out a “systemic extermination” of the people of Donbass, and that “Russia did not start a war, it is ending it.” To stoke the anger further, Russia has falsely claimed that the US is planning chemical attacks in the area.

The US State Department counters these arguments. It writes that there is no evidence of “any ethnic Russians or Russian speakers being under threat from the Ukrainian government,” and further, citing Human Rights Watch, that there are reports that Ukrainians in Russian-occupied areas “face suppression of their culture and national identity and live in an environment of severe repression and fear.”

To counter what it considers disinformation, Russia has taken constitutional action. On March 3rd, the State Duma Committee on State Construction and Legislation approved an amendment that will hold Russians legally accountable for “public dissemination of knowingly false information about the use of the Armed Forces of the Russian Federation.” Punishment includes fines of up to five million rubles and imprisonment for a maximum of 15 years.

Additionally, the Committee recommended the adoption of a bill that will hold anyone who calls for foreign countries to impose sanctions against Russia criminally liable. Proposed punishments are a fine capped at 500,000 rubles, “restriction of freedom,” and imprisonment for up to three years.

The head of the Duma Security Committee also suggested that criminal liability be introduced for “distorting the purpose, role, and tasks of the Armed Forces of the Russian Federation, as well as other formations during special military and other operations.”

Although the majority of Russia’s population gets their news from prominent sites like Gazeta and Lenta, independently run outlets do exist. Take, for example, the Nobel-winning Novaya Gazeta: Novaya makes its rift with sites like Gazeta and Lenta clear in its March 1st newsletter, which begins, “We share the anti-war statements of our Editor-in-Chief Dmitry Muratov and Syndicate 100, the coalition of independent Russian media outlets led by Novaya.” Novaya reiterates its position throughout the newsletter, writing that it will publish issues in Russian as well as Ukrainian in the hopes of reaching a Russian audience and adding one “last thing: Only an anti-war movement [of] Russian citizens can save life on this earth.”

Sites and channels like Novaya have faced mounting difficulty as Russian media censorship intensifies. One such channel, the liberal Ekho Movsky was pulled from the air by the Prosecutor General’s Office, which alleges the station “distributed materials calling for extremist activities and false information about the actions of the Russian military.” On the day of the Committee’s meeting, Ekho Movsky’s Board of Directors decided to liquidate its radio channel and website once and for all.

The Prosecutor General’s Office also blocked the website of the TV channel Dozhd. Additionally, the Roskomnadzor forced Novaya Gazeta, Mediazona, Dozhd, and other news outlets to remove material “because they called what was happening in Ukraine a war.”

In an interview with the New Yorker, Muratov spoke of Novaya’s plans moving forward. “We’ll keep working for as long as we can,” he said. But, he adds, “I think we’re in for a very difficult period. That’s because we did not heed the state’s recommendation to incorporate the official point of view in our assessment of events.” He continues, explaining that Novaya gets its information on Ukraine from correspondents located in the country: “I am very worried about our journalists working in the war zone and in the border areas.”

Still, Novaya and other outlets continue to defy the Roskomnadzor’s instructions. They use the words “war,” “invasion,” and “attack,” and gather information from sources beyond those approved by the Russian government, refusing to back the narrative that Russia’s presence in Ukraine is in the country’s interest.

As many Russian news outlets pedal disinformation, the Ukrainian media has launched a digital counterattack. Much of this has come from state accounts via social platforms like Twitter and Facebook, but the country has also enlisted an “IT Army.”

To begin with the memes, recent posts include March 1st’s “Two leaders, two worlds…Freedom will prevail,” which was followed by a comparison of Putin and Ukrainian president Volodymyr Zeleksnkyy, using the metrics “family,” “military,” “diplomats,” and “place.”  For “family,” a picture of a smiling Zelenskyy beside his wife and kids opposes a suited Putin, his back to the camera, walking along a grey wall on an empty street. “Place,” similarly, is for Putin the text “UNKNOWN BUNKER,” while Zelenskyy is shown on the streets of beleaguered Kyiv.

A February 23rd meme shows Hitler gazing intensely into a diminutive Putin’s eyes, smiling approvingly and cupping the Russian president’s cheek. In the bottom right corner reads the text “Official website.” Ukraine replied to itself: “This is not a ‘meme’, but our and your reality right now.”

As above, @Ukraine retweeted another of Fedorov’s messages, this one to Elon Musk: “while you try to colonize Mars—Russia try to occupy Ukraine!… We ask you to provide Ukraine with Starlink stations and to address sane Russians to stand.” Starlink is a project of Musk’s that aims to provide people anywhere on earth with high-speed internet access—granted, that is, that they possess a separately purchased terminal, made by SpaceX. Musk replied to Fedorov, “Starlink service is now active in Ukraine. More terminals en route.” When asked by the Atlantic how many terminals are currently active in Ukraine, SpaceX did not respond.

Other @Ukraine Tweets include “@Russia = barbaric” and “Tag @Russia and tell them what you think about them.”

On February 26th, Fedorov announced the creation of the IT Army: “We have a lot of talented Ukrainians in the digital sphere: developers, cyber specialists, designers, copywriters, marketers. We continue to fight on the cyber front.”

Prior to the Army’s formation, independent hacktivists were involved in countering Russia as well. The hacktivist group Anonymous tweeted on February 24th that “The Anonymous collective is officially in cyber war against the Russian government.” The group has claimed credit for a number of moves against Russia, including cracking into the Russian Ministry of Defense database, bombarding and bringing down various government websites, and playing pro-Ukraine content on Russian state TV channels.

Composed of more than 175,000 volunteers, the IT Army itself has assigned tasks to its forces through the messaging platform Telegram. These tasks have included bombarding Russian and Belarusian sites and reporting YouTube channels that they believe “openly lie about the war in Ukraine.”

While @Ukraine has been active on Twitter and the IT Army has targeted disinformation, Zelenskyy has used Facebook to connect with Ukraine and the world at large. The tone is set by his profile background image: A Ukrainian flag is pictured beneath a turbulent sky, alongside the text “#stoprussia…UKRAINE IS DEFENDING EUROPE AND THE WORLD.” On his account, Zelenskyy has regularly posted video updates of the days’ fighting in Ukraine.

Zelenskyy has also recorded an address intended particularly for the Russian people. In a February 23rd video, he appeals to the “people of Russia…not as president… As a citizen of Ukraine.” He warns of “a huge war on the European continent,” comparing Russian advances to a “flame.” “You are told,” he says, “that this flame will bring freedom to the people of Ukraine. But the people of Ukraine are already free.”

In his address, Zelenskyy tells the Russian people that they are the victims of disinformation. “Ukraine in your news and Ukraine in reality are two completely different countries.” He continues that “we are different, but that is not a reason to be enemies” and asks for peace.

Who is Alexei Navalny?

Be the first to comment on "The War in Ukraine: Disinformation, Memes, & Hacktivism"