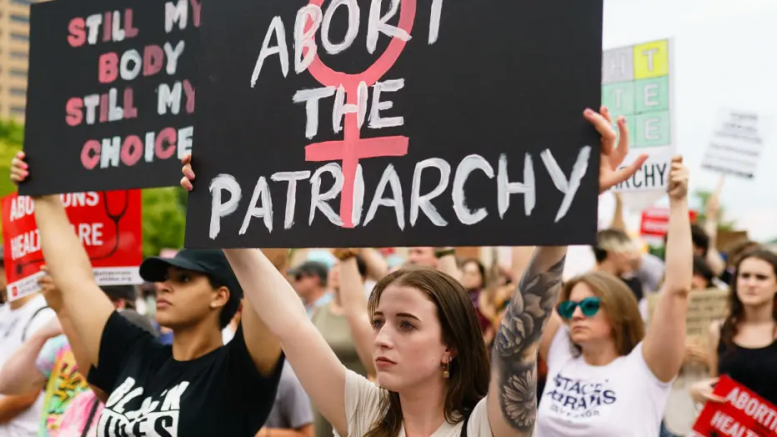 On June 24 of this year, the U.S. Supreme Court rewrote history by overuling Roe v. Wade through their decision in Dobbs v. Jackson Women’s Health Organization. This landmark case declared that the constitutional right to abortion no longer exists.

Justice Samuel Alito wrote for the court majority, stating that the 1973 court ruling and subsequent high court decisions reaffirming Roe “must be overruled” because they were “egregiously wrong,” with arguments so “exceptionally weak” that amounted to “an abuse of judicial authority.”

These justices wrote that the court decision means “young women today will come of age with fewer rights than their mothers and grandmothers.” They expanded, saying that the court’s decision now means that “from the very moment of fertilization, a woman has no rights to speak of.”

“With sorrow — for this Court, but more, for the many millions of American women who have today lost a fundamental constitutional protection — we dissent,” they wrote.

The decision came from a challenge to a Texas statute that made it a crime to perform an abortion unless a woman’s life was at stake. Jane Roe, an unmarried woman who wanted to safely and legally end her pregnancy, filed the case.

In a 7-2 ruling, the court struck down the Texas law and recognized for the first time in American history that the constitutional right to privacy “is broad enough to encompass a woman’s decision whether or not to terminate her pregnancy.”

Justice Harry Blackmun, appointed by President Nixon, wrote the majority opinion, with details about all of the justices’ attitudes toward abortion.

They explained that the Texas law that Roe was fighting against violated the due process clause in the U.S. Constitution’s Fourteenth Amendment. They wrote about the right to privacy, “specific and direct harm medically diagnosable” in the early stages of pregnancy, “psychological harm,” “distress, for all concerned,” and “the additional difficulties and continuing stigma of unwed motherhood,” as was present in Roe’s case.

At the time of Roe, only six states and Washington, D.C. allowed abortion. States that banned abortion allowed for exceptions in situations where a woman’s life was at risk, or in instances of rape, incest, or fetal anomaly. Roe rendered these laws unconstitutional which allowed abortion services to be safer and more accessible to all women.

The decision also set a legal precedent that was used in more than three subsequent Supreme Court cases.

Those impacted by Roe:

According to The Alan Guttmacher Institute’s Trends in Abortion in the United States, 1973–2000, abortion was so unsafe in 1965 that roughly 200 abortions the entire year resulted in death. By 1995, though, deaths due to abortions dropped to nearly zero.

The access to personal health care in the case of an abortion also enabled women to pursue educational and employment opportunities that were otherwise impossible prior to Roe.

In the 1992 Planned Parenthood of Southeastern Pennsylvania v. Casey case, the Supreme Court noted that “the ability of women to participate equally in the economic and social life of the Nation has been facilitated by their ability to control their reproductive lives.”

The aftermath of Roe being overturned:

The new state law in Kentucky makes exceptions for abortion only if a woman’s life is at risk, or to prevent “permanent impairment of a life-sustaining organ of a pregnant person.” This law makes performing an abortion a Class D felony. Other Class D felonies include the possession of a firearm by a convicted felon, stalking in the first degree, and possession of a controlled substance. People convicted of a Class D felony may face one to five years in prison.

Louisiana and South Dakota, along with Kentucky, only make an exception if the pregnant person’s life is in danger. South Dakota also made performing an abortion a felony.

Along with states’ immediate banning of abortion, abortion clinics across the country closed immediately.

Planned Parenthood Great Plains (PPGP) in Alabama announced that it paused all abortion services. Texas’s Whole Woman’s Health announced it will stop providing abortions in all four of their locations. 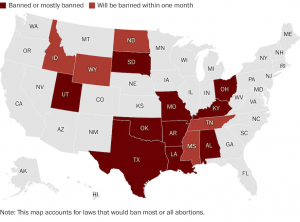 Although many states have reversed the right to abortion, they are not completely satisfied.

Some lawmakers are trying to prohibit people in other states from providing abortions, according to Julie Rikelman, senior director of litigation at the Center for Reproductive Rights.

“What we are seeing already are states and state legislators impacting even people’s ability to access abortion in places where it would remain legal,” Rikelman said.

In Kentucky, for example, an abortion law passed by a Republican supermajority includes many new requirements for dispensing medication abortion pills. The law also has a provision for extraditing people from other states who illegally provide abortion pills to residents of Kentucky.

Although Kentucky has passed this law, it is currently unclear how enforceable these types of laws will be in the future.

Personal aftermath of the decision:

The day of the overruling of Roe, Mississippi House Speaker Philip Gunn was asked whether the restrictive laws in Mississippi that ban all abortions after 15 weeks of pregnancy would apply to 12-year-old girls who are victims of incest.

Gunn replied that while he was unaware how the legislature would lean in relation to allowing young victims of rape and incest to get an abortion, the law “does not include an exception for incest.” He followed this by emphasizing that he did not think the Mississippi government should revisit the matter.

“That is my personal belief,” Gunn explained when asked whether a “12-year-old child molested by her family members should carry that pregnancy to term.”

In Ohio, a six-week trigger ban took effect after Roe was overturned.

When a 10-year-old rape victim learned she was six-weeks pregnant, she sought an abortion in Ohio.

Because of Ohio’s strict abortion ban, the child abuse doctor who took the case contacted health care providers in Indiana. Dr. Caitlin Bernard, an abortion provider in Indiana, agreed to help the 10-year-old with her abortion.

Rokita explained to Fox News journalist Jesse Watters that they were “gathering the evidence” and that the state would “fight this to the end — including looking at her licensure, if she failed to report” the abortion. Watters explained that Dr. Bernard could face a criminal charge if she hadn’t officially reported the abortion.

Although the state tried to get Dr. Bernard and the rape victim on a criminal charge, Dr. Bernard reported the abortion to the correct state agencies before the legally mandated deadline to do so.

Dr. Bernard is “considering legal action against those who have smeared [her], including Indiana Attorney General Todd Rokita,” according to her attorney Kathleen DeLaney.

In Texas, Marlena Stell was told she no longer had a viable pregnancy. She asked her doctor to perform a dilation and curettage, or a D and C. This procedure is standard following a miscarriage to help prevent infection or long-term health problems. In fact, Stell had had the procedure for a previous miscarriage in 2018, when her body did not naturally miscarry.

Since the procedure is also used during abortions, Stell’s doctor did not want to perform a D and C.

Stell was forced to carry her dead fetus for two weeks before she could find a doctor to provide the medical intervention that previous physicians had denied her.

“She asked that I try to miscarry at home,” Stell explained.

While pregnant people across the country are negatively affected by the decision, some people are happy with the overruling of Roe. The anti-abortion as a whole is not entirely happy, though, Leah Litman, a University of Michigan law professor, observes.

“The next time the Republicans win control of the Senate and the White House and the House of Representatives, a national abortion ban is going to be on the table,” Litman said in an interview.

While a decision has been taken, abortion remains a divisive issue that will continue to spark conversation.

Be the first to comment on "Overruling of Roe v. Wade: The History and the Consequences"