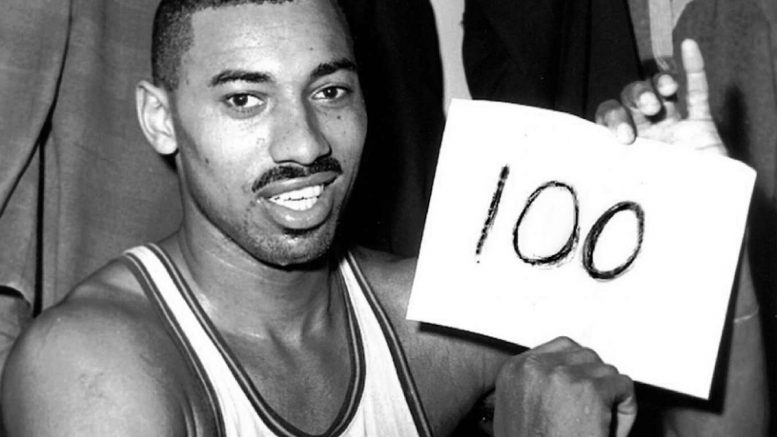 Wilt Chamberlain in a picture after his historic 100 point game

Wilt Chamberlain. Wilt the Stilt. Goliath. The Big Dipper. Call him what you want, but the one common quality between all names is the meaning behind them. Chamberlain is arguably the most athletic NBA player to ever play. He was so dominant that in his first season, Chamberlain averaged 37.6 points and 27 rebounds per game. Even more impressive, in his iconic rookie season, he had a 44.42 rebound game against one of the other greats of basketball, Bill Russell.

Following that season, Chamberlain went on to control his opponents in a similar fashion. For the next six seasons, he averaged 39.5 points and 24.9 rebounds per game, including a 50.4 points and 27.2 rebounds per game season. However, he wasn’t able to win a championship and gained a reputation of a loser who only cared about individual statistics.

Following these remarks by those around him, Chamberlain changed his game by going to the Philadelphia 76ers. He drastically decreased his shot attempts and proceeded to become one of the best passers in the game even with his immense size. Instead of using the size to take as many shots as possible, he would draw the attention of the opposing team and pass the ball to his teammates when open. After changed his game play like that, and he eventually won two championships.

For these reasons and more, Wilt Chamberlain is arguably the GOAT (Greatest of All Time) of basketball. In the 60 years since his NBA career began, Chamberlain’s records have never been broken, including his greatest record of all time: a 100 point game, an achievement I don’t think that will be exceeded by a player in the future. When watching his tapes, you can see the ease with which he played; he was always better than the player opposing him. Although in his later years, his utility was heavily decreased, Chamberlain still kept a level of play that had opposing teams attempt scrambling for a way to defend against him. Moreover, Chamberlain’s talents made basketball relevant. After he began playing, NBA ratings significantly increased and became one of America’s beloved sports. Legacy plays a huge part in determining the one and only person who could be named Greatest of All Time in their sport. Wilt Chamberlain’s legacy will never be forgotten, and that is why he deserves to be named GOAT of basketball.

Be the first to comment on "Making the Case: Wilt Chamberlain as Basketball’s GOAT"