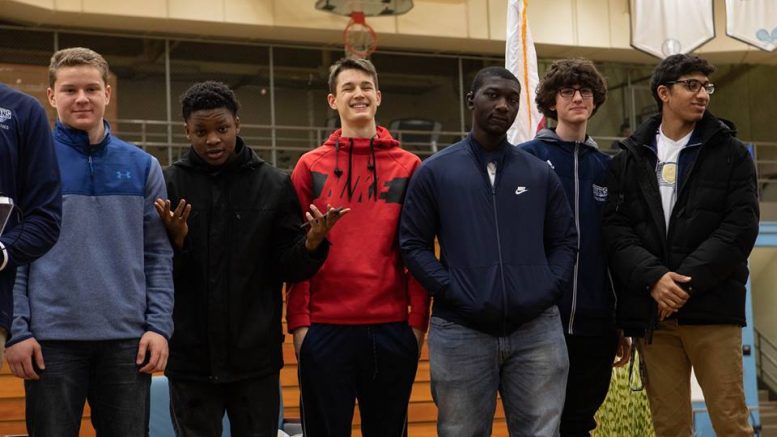 The boys' basketball team being recognized for their achievements. Source: ISP

As witnessed by the intense end to the season, IMSA boys’ basketball had a record-breaking year. Through ups and downs, they pulled off a season beyond that of any other IMSA basketball team in history. Faris Shaikh (’19) also broke the record for most points scored by any IMSA basketball player over three seasons during his final few games.

The season culminated in an intense regional game against Kaneland and a whiteout, where the first 300 students received free t-shirts to support our players. It was the largest amount of students in attendance at a game that IMSA saw all year, and potentially ever in history. The game resulted in a tie which led to overtime. Unfortunately, our Titans lost in overtime, but they refused to stop putting up a fight. Faris Shaikh and Cassius Harper ended their IMSA basketball careers on the bench after fouling out to cause turnovers and gain our team the ball. Seniors said that, although they lost, the regional basketball game was one of the most memorable moments of their basketball careers.

Faris stated that this season was more successful than previous seasons because “[This] was the year where we played as a team finally. Last year and the year before, there were some players who tried to do everything on their own, but this year there wasn’t like a sole, stand out player in the sense that we all knew we’d have to contribute to a win.”

Congratulations to the team for a successful season!

Be the first to comment on "Boys’ Basketball Record Season"