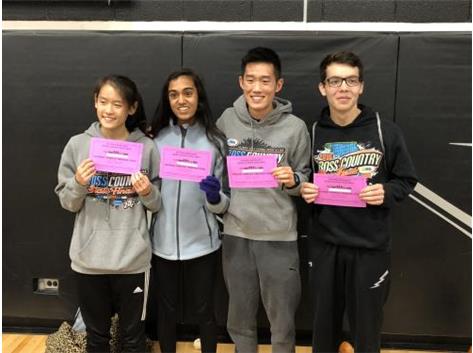 Chances are, if you’ve paid any attention to the sports scene at IMSA, you noticed that our cross country team has had an exceptional season. From qualifying both teams for sectionals to sending four runners to the state meet, the team experienced incredible success. Their coach, Grant Bell, and captains led them through the tough season filled with injuries, personal records, and celebrations.

This year’s team placed high at many of their meets. At their meet in Lisle in September, multiple runners finished in the top fifteen. The team had a widespread team of runners, and talent came from sophomores, juniors, and seniors alike. The girls’ captains this year were Diana Gonzalez (’20), Charlotte Giff (’19), and Amy Churchill (’20). The captains for the boys were Daniel Chen (’19), Daniel Soto (’19), and Jake Sutter (’19).

Daniel Soto explained that this time the state meet put “a lot more pressure on me because I wanted to do really well, but last time we were running as a team so we could place at state.” He explained that he wasn’t able to PR as many times as he wanted to, but luckily, he PRed at the state meet.

This season was Monika’s first season ever running cross country, and she “did cross country camp at the high school she would have gone to… and she found her love for running. It was really chill because the nice thing about cross country is that it’s individual so it’s really about the amount of work you put into it.” In the future, she plans to run track and keep running during her off-season.

Finally, the sibling duo on the team explained that there is not a sibling rivalry taking place between them. In fact, Delicia stated that “it’s super convenient because our parents get to see both of us run and also state’s like right by our house so it was just easy, and there was a lot of support from my entire family because they were all there,” and Daniel added “I didn’t really interact with her that much because we were in different groups but it was pretty neat.” He also stated that he plans to continue running in college.

Be the first to comment on "Cross Country’s Dominant Season"