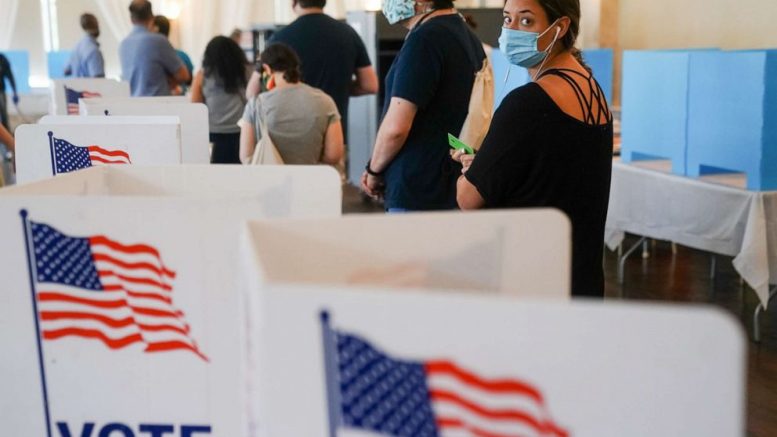 Voter turnout for the 2020 presidential election was at an all-time high. Picture by: Elijah Nouvelage

But this election also brought the highest voter turnout the United States has ever seen with more than 160 million people – almost two-thirds of the registered voters – voting this year. This election also broke the record for having the highest turnout rate since 1900. There were twice the number of in-person early votes this year in comparison to the 2016 election with more than 100 million people casting their ballots by mail-in or early in-person voting. Most people said that this election matters to them more than any previous election, stating that the coronavirus pandemic, social justice, the economy, immigration, health care, and the environment as reasons that led them to  vote.

Regardless of the States’ inability to get a 70% voter turnout rate, many states have hit historic milestones with their votes. Texas, in specific, had their highest voter turnout since 1992. Even though red states like Texas had a major increase in voter turnout, there were still plenty of blue states and counties and not enough red states and counties. Minnesota, a typically blue state, stayed blue this year. However, there are quite a few counties in Minnesota that voted for Trump. Wright County had 94.3% of their registered voters come out and vote, and 90% of those votes were for President Trump. Sherburne County, Minnesota, had 92% of their registered voters vote and ultimately gave President Trump that county, as well. Regardless of the high number of votes for President Trump, there were plenty more for President-Elect Biden.

Millions of people who were never eligible voters before this election came out to vote, including millions of young people who finally turned 18 and millions of naturalized citizens. One in every ten eligible voters was part of Gen Z, which is around 24 million people. Gen Z is more racially and ethnically diverse than any previous generation and is on track to be the most well-educated generation. They are progressive, pro-government, see the country’s growing racial and ethnic diversity as a good thing, and are less likely to think the United States is superior to other nations. Overall, Gen Z tends to be more liberal-leaning than other generations. Because of this, there were millions of new votes for President-Elect Biden. A total of 77% of the eligible Gen Z voters disapproved of President Trump’s administration, which was also a large reason for so many Democratic Gen Z votes. Another 10% of eligible voters in this election were naturalized citizens, which is almost 23 million U.S. immigrants.