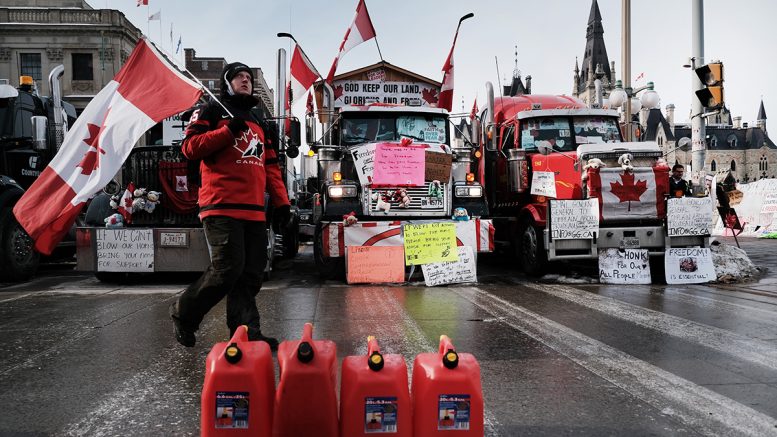 On February 14th, Canadian Prime Minister Justin Trudeau invoked the Emergencies Act, marking a first in Canada’s history, to put an end to protests that have blockaded the streets of the country’s capital, Ottawa, and various US border crossings.

The “Freedom Convoy” protests to which Trudeau continues to respond began in January with a group of Canadian truckers and conservative groups who opposed COVID-19 measures imposed on cross-border drivers. Considered essential workers, cross-border drivers had previously been exempt from vaccine mandates. When a vaccinate-or-quarantine mandate that would, specifically, affect the drivers was implemented, it angered many. In response, they then planned to drive a route from the west to the east of the country in protest. As the Convoy gained numbers, however, the drivers parked their trucks.

Ontario Premier Doug Ford, whose city’s border with the US has been blockaded, deems it a siege. “I call it a siege,” he said, “because that is what it is. It’s an illegal occupation. This is no longer a protest. With a protest, you peacefully make your point and you go back home.”

Many fear the Convoy’s effects on Canada’s economy and supply chain. Following the border blockade, Ford declared his city to be in a state of emergency. In Windsor, which lies on the US-Canada border across from Detroit, the Convoy has halted traffic on the trans-national Ambassador Bridge, costing the Canadian automotive industry hundreds of millions of dollars as parts trade between the countries is slowed.

The issue has been felt by the US too. “American legislators are freaking out, and rightfully so,” University of Toronto political science professor Nelson Wiseman told the Associated Press. “Pressure is now being exerted by the White House on Trudeau to act more decisively.”

Wiseman’s remarks come as Biden and Trudeau collaborate to shut down protests, which have inspired similar truck convoys abroad and threaten to do so in the US as well. “President Biden and I both agree,” Trudeau told reporters, “that for the security of the people and the economy, these blockades cannot continue.”

Trudeau has issued multiple warnings to the Convoy. “You don’t want to end up losing your license, end up with a criminal record, which will impact your job, your livelihood, even your ability to travel internationally, including to the US.”

In Ontario, Ford enacted measures that prohibited drivers from blocking essential infrastructure, with penalties for disobedience including prison time, fines of up to $100,000, and revocation of commercial license. Trudeau commended the Premier.

Now, backed by the powers vested in him by the Emergencies Act, which permits the federal government to enforce “special temporary measures to ensure safety and security during national emergencies,” Trudeau has increased ability to enforce his own measures.

Trudeau’s government could bar protestors from or force them to evacuate certain areas, with the support of the military if need be, though Trudeau maintains that Canada is “a long way from having to call in the military.”

Additionally, Canadian Finance Minister Chrystia Freeland has said the government will broaden its anti-money-laundering regulations to cut the Convoy’s funding. The Convoy has relied on fundraising websites such as GiveSendGo.com to support its protests. On GiveSendGo.com, roughly 93,000 donations have been made to the Convoy, totaling over $8.4 million.

Much of the sum collected on such platforms has come from foreign sources, namely the US. Trudeau said that US donors have been responsible for as much as 50% of donations on some platforms.

As the Convoy’s blockades continue, omicron infection rates have fallen. Many of Canada’s restrictions have been removed in response.

Nonetheless, throughout the pandemic, the majority of Canadians have been in favor of COVID-19 mitigation measures. Over 80% of Canada’s eligible population is vaccinated. The Canadian Trucking Alliance, further, estimates that 85-90% of the country’s 120,000 cross-border truckers have received the vaccine.

A History of Islamophobia