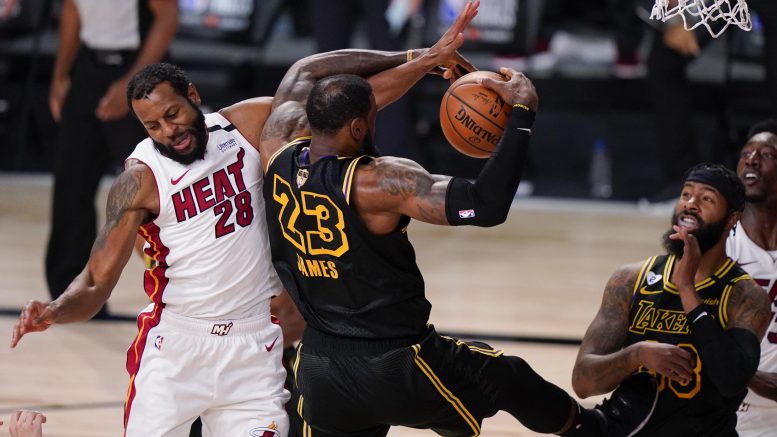 The NBA Finals have arrived, and while they aren’t over yet, we have already seen some amazing things happen. Jimmy Butler joined the small list of players who achieved a 40 point triple double in the finals. Also, the Lakers were up 3-1 in the finals, only to lose game 5 in the mamba jerseys with a restaurant booked at as well. To summarize, it’s crazy!

Now, the finals could just end today, with the Lakers taking game 6, but what if it doesn’t? What if the Heat take game 6 and this becomes a 3-3 series? Obviously, these are speculations, but what are the implications behind these outcomes? For that, I am going to give you all a little bit of context.

This is going to be Lebron’s 10th finals appearance almost in a row. His record has been 3-6 and if he were to lose these finals, he would not hear the end of it. The narrative will be “you played a 5th seed team and lost,” or “you had Anthony Davis and still lost it.” Clearly, this is the Laker’s Chip to lose. They are up 3-2 and have to win one of the next two games.

On the other side, Jimmy Butler has never been to a finals before. However, I would compare Jimmy to a poor, poor, poor version of MJ. When looking at skills, you can’t compare the two, but when looking at mentality, both are the same: Win at all costs. If the Heat win these finals, it would probably come close to elapsing the 2016 comeback against the 73-9 Warriors.

However, if the Heat were to lose, I don’t think there would be any repercussions at all. After all, they were expected to lose, and if they lose, they will be heralded as a great, young team.

One of the significant differences between the Heat and the Lakers, is that the Lakers have a bunch of veteran players. A lot of these veteran players do not have championships, and I can only imagine their need to win what might be their last chance at a chip.

In my belief, this series is going to a game 7 and it is going to be a game 7 for the ages. On my first article about the play-offs, I said the Heat were going to take it in 7. Although I said this, I have absolutely zero confidence in the prediction. It can truly go either way, and I’m excited to see which way it does fall toward.

I was wrong I suppose, but in retrospect, the Heat played a great series considering that they had injuries playing against them. Again, the Heat are going to be heralded as a great, young team, and I am excited to see what they do with more weapons. As for the Lakers, I’m not really sure what goes from here. They have many many veterans, and they need to start branching out for rookies. To summarize, here are some key outcomes of the chip:

Now, the real question is whether the Lakers have enough pieces for another championship next year…

Or, with the return of many star players from injuries, will the whole picture of the NBA be changed drastically?

Be the first to comment on "The NBA Finals: What is Going On?"