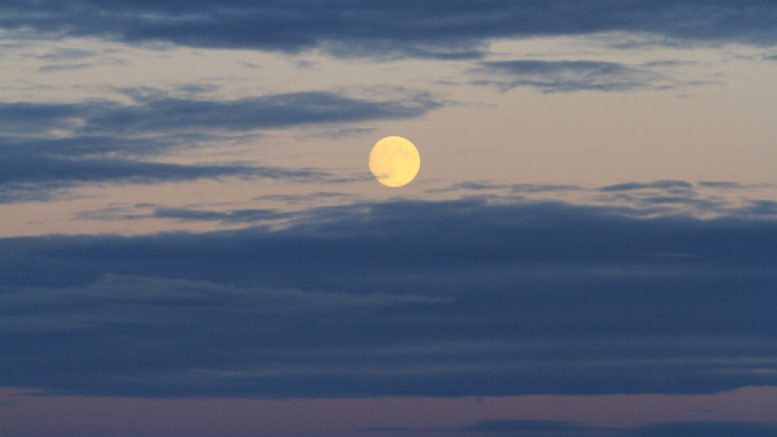 The Harvest Moon is a full moon that occurs closest to the autumnal equinox.

The Mid Autumn Festival, or the moon festival, is a celebration of the rise of the full moon that occurs closest to the autumnal equinox. This celebration traditionally takes place on the fifteenth day of the eighth month in the Chinese lunar calendar, which corresponds to September or early October in the Gregorian calendar. The moon festival originates from traditional moon worship rituals in China and is now observed in many East and Southeast Asian countries.

An important part of  Zhōngqiū Jié, or mid-autumn festival, is food. Families gather together to share a home-cooked meal or dine at a restaurant. A staple at the table is mooncakes. Mooncakes are a traditional and symbolic Chinese pastry and are often prepared as gifts to friends and family.

Other traditions include lighting lanterns and going to a place with a good view of the moon, such as the balcony, rooftop, or the lakeside. In Hong Kong, many neighborhoods light up impressive lantern displays and set up stage shows, game stalls, palm readings, among other festive activities. The showstopper ritual is the Fire Dragon Dance in which a 200-foot long dragon made from hemp rope, pearl straw, bamboo, and incense sticks is lit with fire and operated by three hundred people to create a lively performance. 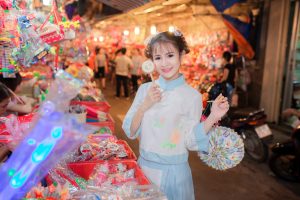 Barbecuing and moon gazing in public parks are a common way of celebrating the Mid Autumn festival in Taiwan. Families will often gather and head for their nearest national park to get a view of a night sky that is unpolluted by the city’s lights. Another tradition is making hats out of the peel of a pomelo fruit. This tradition emerged because it was believed that the moon goddess, Chang’e, would have a better view of the children wearing the hats as pomelos were her favorite fruit. 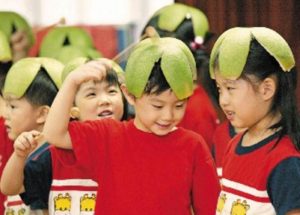 O-Tsukimi, which translates to “moon-viewing”, refers to the Japanese tradition of holding gatherings to view the harvest moon. On the evening of the harvest moon, many people picnic and drink sake outdoors. The most traditional food associated with Tsukimi is known as tsukimi dango, or small white dumplings made of rice. Tsukimi dango are typically displayed in an altar to represent an offering to the moon. Susuki, or pampas grass, as well as other autumn flowers are placed in vases in one’s home or near the area where the moon-viewing takes place. 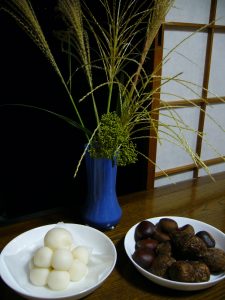 In Korea, the Mid Autumn festival is called Chuseok which translates to “Autumn eve.” Chuseok is a three-day holiday during which Koreans visit their hometowns, hold a ceremony in honor of their ancestors, and share a feast of traditional Korean food. A food prepared particularly during this holiday is a rice cake called songpyeon which is often filled with sesame seeds, chestnuts, or red bean paste. Gift-giving is also customary to show thanks and appreciation for friends and family. 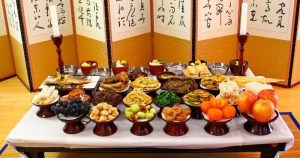 In Vietnam, Tết Trung Thu is regarded as a holiday mainly for the children. Near the time of the harvest moon, parents buy their children lanterns, snacks, and various masks. In the evening of the harvest moon, children participate in parades in the dark holding lanterns of various forms, shapes, and colors. In addition to carrying lanterns, the children also don decorated masks made from papier-mâché or plastic. 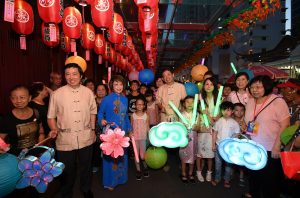 Children with their lanterns at the Tết Trung Thu parade. (Photo/Mummyfique)

Bon Om Touk, or The Water and Moon Festival, is a three-day celebration that begins with a traditional boat race that lasts the first two days of the festival. The boats are painted with bright colors and various designs. The most common design painted on the boats is of the Neak, which is the Cambodian sea dragon. During the festival, hundreds of Cambodian males race their boats at the Tonle Sap River. During the day, people crowd the streets buying food and attending live musical performances. When evening falls, Sampeas Preah Khe, which translates to “prayers to the moon”, commences. At this time, people prepare an array of offerings that most commonly include rabbits, various fruits, and a traditional rice dish called Ak Ambok. Incense candles are burned near these offerings so that wishes can be made upon the moon. At midnight, people head to a temple to pray, make wishes, and enjoy food together. 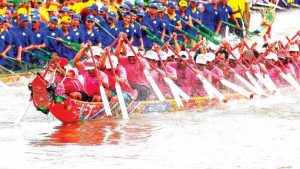