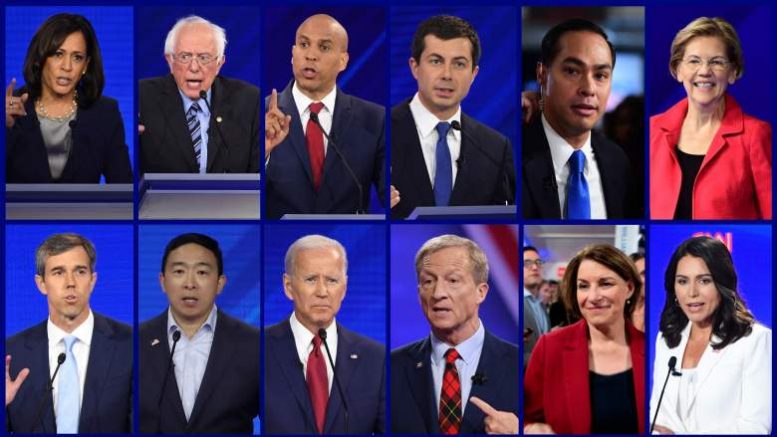 From the 21 that started on June 26, the Democratic Presidential Candidate pool has narrowed down to a group of 12, who once again debated at Otterbein University on October 15th, 2019. The night was an intense one, full of expansive questions and intense arguments. In case you were too busy working on that problem set, here’s what you missed:

The first question asked of the candidates was about the impeachment inquiry against Donald Trump.  All the candidates support the impeachment inquiry and were able to speak their mind on the proceedings. The end of this question centered around Joe Biden and his son’s, Hunter Biden, involvement in foreign business while he was Vice President.  Cooper asked him, “Why was it okay for your son when you were vice president?” Biden then responded reiterating how neither he nor his son did anything wrong, just like Hunter Biden stated earlier that day. Cory Booker then spoke in support of Biden, saying “if you come after Joe Biden, you’re going to have to deal with me.”

Lacey asked the next question, focusing on the economy. Warren received criticism from Buttigieg after she, in his words, was asked a “yes or no question that didn’t get a yes or no answer,” which was whether or not the middle-class would see tax raises to pay for Medicare for all. They went back and forth for a few minutes until the discussion moved to Sanders who confirmed that in his plan for Medicare for all, taxes would go up for middle-class families. Yet, when approached after Sander’s comment, Warren still did not answer with a straightforward answer. She was then also slammed by Klobuchar for not acknowledging this. Harris used her time to bring up that in all of the debates they have had, not one has included women’s access to reproductive health care in their conversation.

With a projected 25% of  jobs being lost to automation in the next 10 years, Burnett asked Sanders if he is promising to ensure a job for every single American, to which he responded, “Damn right we will.” Yang took a different approach to the question by detailing his universal basic income of $1,000 a month. However, Warren countered that it’s not the loss of jobs that is a problem, but bad trade policy. Yang, an entrepreneur, responded passionately with examples of visible change he has observed: the self-serve kiosks have replaced workers at fast-food chains and grocery stores, locally owned stores are closing in every town, his own friends are piloting self-driving trucks that could potentially replace the 3.5 million truck drivers in the United States. The debate then continued with O’ Rourke and Booker’s ideas on how to convince GM to return production to the U.S. from Mexico. Both focused on putting dignity back into people’s jobs and making sure everyone has a living wage. Sanders discussed his plan of fairly taxing the top 0.1% of citizens to end the high levels of wealth and income inequality mainly brought upon by the number of billionaires in this country. Steyer, the only billionaire Democratic presidential candidate, responded saying he would “undo every Republican tax cut for rich people and major corporations,” while Biden warned of “demonizing rich people.”

After a break, the discussion turned toward foreign policy. This section centered around the candidates’ thoughts on Trump pulling out of Syria. Many on the stage that night have been calling for an end to all the endless wars going on, yet not everyone was on the same side on whether or not pulling out of Syria was the right move. Warren pushed for a withdrawal from Syria and a greater emphasis on negotiation. Buttigieg believed this was wrong move, and asked in response, “what the hell happened to American leadership?”

Gabbard, however, criticized Buttigieg for wanting to continue to be involved in a “regime change war,” and mentioned the refugees that have had to flee Syria since the conflict started. Buttigieg pushed back by recounting his military experience in Syria, and the troops’ promise of “keeping our word.”

The discussion then moved to Sanders and his thoughts on whether Turkey is still a  U.S. ally and if they should remain in NATO.  He responded to saying “Turkey is not a U.S. ally when they invade another country and engage in mass slaughter.” Yet, there were mixed opinions on whether or not the U.S. should be working with Turkey at all.

The questions moved to how the candidates as president would check Vladimir Putin’s power on the world stage. O’ Rourke responded saying we must be “unafraid in ensuring that we hold Russia accountable for invading the world’s great democracy,” while Steyer criticized the Trump administration’s America First program, which he claimed involves no plans, no process, no partners, and has only “proved to be a disaster in terms of our response to Russia’s attacking our democracy.” Klobuchar then boldly asserted her belief that Russia’s involvement in the U.S election was more than just meddling, but an invasion.

The next topics focused on domestic issues, starting with gun violence. O’ Rourke and Buttigieg butted heads on how they would take weapons such as the AR-15 and AK-47 off the street. Booker brought the conversation to gun violence in school and the fear of school shootings in this country. Harris refuted Warren’s opposition to a proposal regarding the mandatory buyback of guns by announcing her a plan to give Congress 100 days to put in place a comprehensive plan to deal with the epidemic or she will use executive power to do so.

Overall, the Democratic debate showed that most of the candidates were united in their thoughts of impeachment, yet found disagreement in many other areas of their platforms. Warren, as the front runner going into the debate, was the source of much criticism, while Buttigieg found more support after the debate.  Sanders, coming back from a heart attack, came back fighting as much as ever. While health care was a topic of contention among all the candidates, it was not the center of the debate, which many viewers were glad for, as more time could be spent on other equally important topics. The debates continue on November 20th, as we come closer and closer to the Primaries.