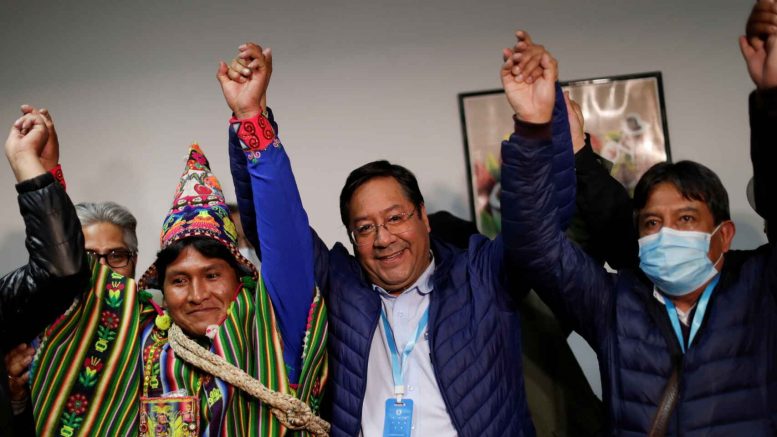 Recently, Luis Arce won a landslide victory in the 2020 Bolivian general election after a coup d’etat removed his party, Movimiento al Socialismo (MAS), from power eleven months ago. MAS also won a majority in the country’s senate. However, the party faces significant challenges to bring peace back to Bolivia. In 2006, Evo Morales was elected president of Bolivia. Under Morales, the country made great progress in economic development, women’s rights, indigenous rights, environmental protection, healthcare reform, and education, and increased the living standards of Bolivians. The number of people living in poverty fell from 59.9% in 2006 to 34.6% in 2017, with the number of Bolivians in extreme poverty falling from 38.3% to 15.2%. As the country’s first Indigenous president, he promised to bring power to marginalized groups by redistributing 134 million acres of land from private and state ownership to Indigenous families. Morales nationalized Bolivia’s oil and gas industries, taking away negotiating power from foreign energy companies and returning it to Bolivia.

However, after a disputed election in 2019, conservative senator Jeanine Áñez, backed by the United States and the Organization of American States, declared herself president and forced Morales to flee the country. Under Áñez, dozens of Indigenous protestors were killed by the Bolivian military, natural resource extraction was intensified and reopened to international companies and social welfare and public investment programs were rolled back. The economic model created by Morales was displaced, and the economy shrank by 5.6% while the GDP’s growth slowed.

Despite government repression, protests continued against Áñez, demanding free and fair elections. Finally, in 2020, elections were held and the former finance minister of Morales’ government, Luis Arce, won a decisive victory. His success has been credited to Bolivia’s strong social movements and the reaction of the Bolivian people to the authoritarian government of Áñez. This indicates that the Bolivian people want a return to the policies of Morales and MAS.

However, the new government faces many challenges. Bolivia has the fifth-highest COVID-19 mortality rate per capita, and much of its economy has been shut down. Unemployment and poverty increased under Áñez even before the pandemic compounded these issues. Opponents of MAS claim that Morales centralized power and co-opted social movements, and as a result, many Bolivians still have concerns about MAS. Arce and MAS are now faced with the challenge of successfully navigating these issues to bring prosperity back to Bolivia.