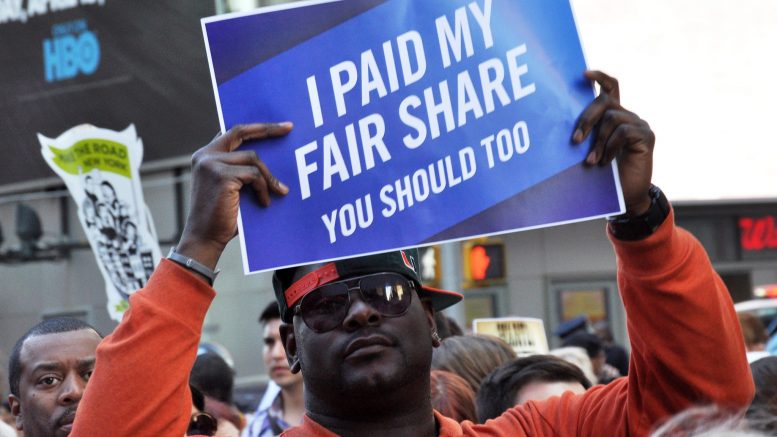 Consider the following individuals and their respective situations. Maria, a single mother, works two jobs with overtime in order to financially provide for her daughter and son. She lives paycheck-to-paycheck, only making $12 an hour or a mere $24,960 a year. As such, Maria depends upon governmental assistance programs like SNAP and TANF, yet these, too, barely allow her to make ends meet. On the other hand, John, a husband and father to Jack and Jill, operates a business valued at nearly six million dollars. John’s financial assets continue to grow, thereby contributing to his family’s collective wealth. Altogether, John and Maria  stand on opposite sides of the socioeconomic spectrum, yet both Illinoisans come together every April to pay taxes with the exact same tax rate. For years, Illinois has had what is known as a flat tax, a taxation system blind of an individual’s extenuating circumstances or socioeconomic status, imposing the same 4.95% income tax rate on all taxpayers. The flat-tax rate has for far too long become an agent of the wealthy and a burden on middle and lower-income families.

Illinoisans, however, had the power to change this just a few weeks ago. Alongside the election of state representatives, senators, and the President of the United States of America,  Illinois voters were asked to cast their ballot for or against the Fair Income Tax Act, a proposal that would amend Illinois’s state constitution to establish a graduated income tax. Yet, Illinoisans failed to effectively employ their power – millions voted against the act and defeated the proposal. Numerous exit polls cite various reasons as to why voters were dubious of the act, yet none can effectively discredit the wide-spreading positive changes that the act would have brought to Illinois.

Quite frankly, Illinois is currently in a deep financial mess, which is precisely why a Fair Income Tax Act is more important now than ever. Illinois faces a multimillion-dollar budget deficit and the state is billions of dollars in debt, issues that have been further exacerbated by the COVID-19 pandemic. Many propose cutting funding for schools, while others advocate for the flat tax to be increased to 5.95%. However, both of these solutions fail to address Illinois’s financial issues and simultaneously advocate for the public good, a balance that can only be achieved by the Fair Income Tax Act. In brief, the act poses as an inexpensive and feasible economic stimulus. By decreasing tax rates on lower income families, the Fair Income Tax Act would increase discretionary spending which has been statistically linked to a much stronger economy. The act would also draw in millions of dollars from the wealthy who would have to pay their fair share, leading to a collective increased annual revenue of 3.4 billion dollars.

A graduated tax would also provide economic equity for Illinoisans. The flat-tax rate system currently employed in Illinois fundamentally harms lower-income families more than any other state economic policy. Trisha Crowley, president of the League of Women Voters of Champaign County, makes her view on the state’s current tax system clear by asserting, “In Illinois, the bottom 20 percent of wage earners currently pay almost twice as much of their total income for state and local taxes as the top 20 percent. This is an unjust burden on our poorest residents.” In fact, a study from Wallethub found Illinois to have “one of the most unfair tax systems in the United States of America.” The flat-tax rate system currently in use in Illinois increases the income gap between the rich and the poor, and thus is fundamentally inequitable for lower-income families. However, by taxing the affluent of Illinois at a rate directly proportional to that of their wealth, lower-income families would be let free of the burden they currently face. It is not just only lower-income families that would feel these benefits – nearly 97% of all Illinois families would see some degree of tax relief. Even more is that with the increased economic revenue from the wealthy, the state of Illinois could invest the money into social welfare programs to provide targeted support to marginalized and disadvantaged communities.

However, this proposal does not come without backlash. Those against the Fair Income Tax Act falsely characterize the act in numerous ways, particularly in that it would make it easier for Illinois governor, J.B. Pritzker, and his administration to “reach into your pockets and get more money.” However, a deeper analysis makes it clear that this is not the case. The current flat-tax clause in the Illinois Constitution (Section 2 of Article IX) does not prohibit the General Assembly or the state government to exercise full authority over the taxing system, meaning that the current taxation system in theory still allows for Pritzker and his administration to “reach into your pockets.” Furthermore, the graduated-tax instills a quota on the highest tax rate that can be imposed on a corporation, meaning that if anything, a graduated-tax actually decreases the extent to which a government can roach into an individual’s economic autonomy. These individuals also fail to recognize that a graduated income tax is not a novel idea. The idea stretches far back into Massachusetts in the early 17th century, and 32 states have a defined progressive income tax today.

Politics and economic terms aside, it simply all comes down to plain human nature. The Fair Income Tax Act raised this crucial question at polling places around Illinois this election – does it make sense for a single mother working two jobs to pay the same income tax rate as a millionaire making thousands every day? Although millions of voters seem to have decided the answer is yes, the fight for a more just taxation system is far from over. The fight is now in our hands. Observe Illinois’s precarious fiscal position. Observe the unfairness of Illinois’s taxation system. Observe the economic inequity faced by marginalized communities around Illinois as a result of the flat tax. And most importantly, observe the plight of working-class families like that of Maria. A graduated income tax offers a bridge to economic justice and social advancements for all.

Be the first to comment on "The Fair Income Tax Act: Promoting Economic Growth and Social Equity"