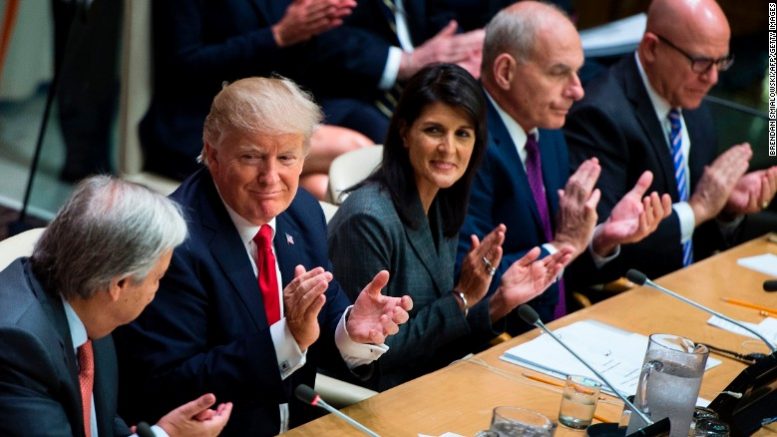 Trump's first meeting with the United Nations, an organization joining 195 different countries from around the world.

Nine months after his inauguration as the President of the United States of America, Donald Trump met for the first time with leaders of the United Nations General Assembly on Tuesday.

Trump has offered a wide range of views on the UN in the past, mostly undermining its practicality and characterizing the organization as under-performing and inefficient. He stated on Monday that “the United Nations has not reached its full potential because of bureaucracy and mismanagement” and urged the U.N. to focus “more on people and less on bureaucracy.”

Having heard Trump’s dismissal of international multilateral organizations such as NATO, APEC, and the UN before, other countries are listening intently for signs as to how closely Trump will choose to align himself with the other delegates, especially in the face of current and rising challenges such as Iran, Syria, and North Korea. But despite the ongoing troubles, President Trump has found valuable allies such as the U.N. Secretary General Antonio Guterres, and he has already talked to many world leaders including the French and the Israeli Prime Ministers, Emmanuel Macron and Benjamin Netanyahu, respectively.

His speech to the General Assembly of 195 delegates on Tuesday included the re-examination of the 2015 Iran nuclear deal, in which he had criticized former President Barack Obama’s policy. Deeming it an “embarrassment to the U.S.,” the President clearly expressed that the potential the agreement gave to the Iranian government to set up a nuclear program was an outcome he would not tolerate. It was a signal from the president that he was seriously considering either pulling out of or renegotiating the Iran nuclear deal. In addition, Trump also called upon the other nations to unite in opposition to the recent aggression shown by North Korea with their long-range missile testing. Threatening to “totally destroy North Korea” if the United States is forced to defend itself or allies against the North’s aggression, he taunted the North Korean leader Kim Jong Un, calling him a “Rocket Man on a suicide mission.”

“As expected, Trump delivered very aggressive statements,” remarked Eva Liu (’19), Vice President of IMSA’s Model United Nations. “Despite the power behind his words, his military threats may very well have made the issue worse, especially as he had blatantly ignored China’s urge to pressure North Korea through the United Nations organization.”

With their first conference scheduled for the end of October, IMSA’s Model UN Club expects the result of Trump’s negotiations to become a critical source of discussion for the student delegates’ debates.

Be the first to comment on "Trump Makes Debut Speech at U.N. General Assembly"