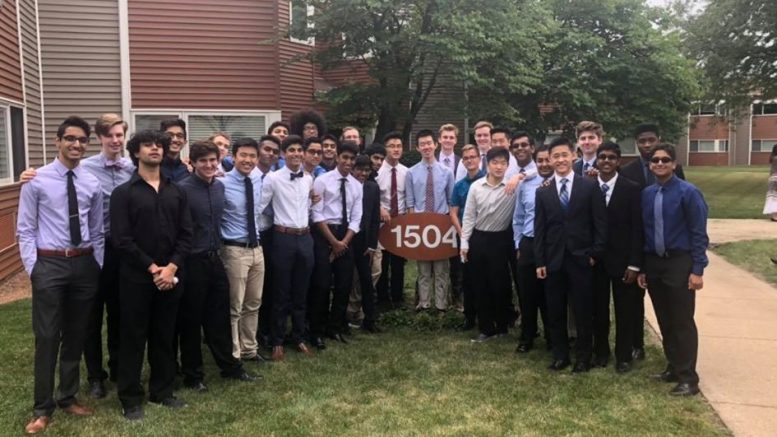 1504 upperclassmen pose in front of the sign after convocation.

On October 7, 1504 met in the hall commons to discuss a harsh fact: the hall, with a total of over 200 violations, has 100 more violations than any other residence hall. 04 has, yet again, made themselves stand out in the eyes of Student Life, racking up more violations than they did all last year in less than one quarter. With the memory of last year’s property damage and $17 fine still fresh, 04 is past the stage of getting “one more chance.”

The purpose of the all hall meeting was to decide the punishment that the hall would receive, the options given by the RCs being an all hall mandatory 7 check with no sign-outs, 11pm in-wing, no additional residential privs (sophomore and senior privs), or no residential privs (no walking trips, no intervis, no signing out for extracurriculars or sports, ordering, etc.). When the RCs asked for the students’ thoughts, the options were met with immediate backlash.

The students started off by offering alternatives to the punishment options and explained the problems of each of them to the RCs. Mandatory 7 check had the most opposition, as students in sports and extracurricular clubs would have to miss practices, events, and meetings, as signing out would also be banned. Additionally, sophomores who already had 7 check would not be affected. Similarly, juniors would not be affected if there were no more additional residential privs. Seniors in particular spoke out against no additional residential privs, resulting in 11pm in-wing being the most acceptable.

It wasn’t just the options that infuriated the students. The concept of the “all hall” punishment seemed unmerited to many. The distribution of violations was not even spread throughout all the students: certain wings contributed significantly more to the two hundred violations than others, causing the students to propose punishments based on individuals and not the entire hall. The RC response was somewhat subdued to the proposals, although the fact that they were willing to hear the students’ thoughts is promising.

The students were not satisfied with the information given to them during the meetings so student leaders in the hall, Student Council members and RSLs, were delegated to speak with administration, however, they were given similar answers and were told to be patient.

The notion of violations is not something new to 04, a consistent leader in receiving violations on the campus. This year, however, the issue has become too large to ignore. So, what caused the drastic increase? Is it the change in RCs? Is it a lack of RSL/Student Leader control? Or, has 04 simply gotten too comfortable and have the students started to become reckless? A future article consisting of interviews of both students and RCs might point us to some answers. For now, we’ll just wait with our 04 friends and see how their fate is decided.

How to Add Some Rays to Your Days

The Effectiveness of Preview Day

Be the first to comment on "Not So Pr04ever…"