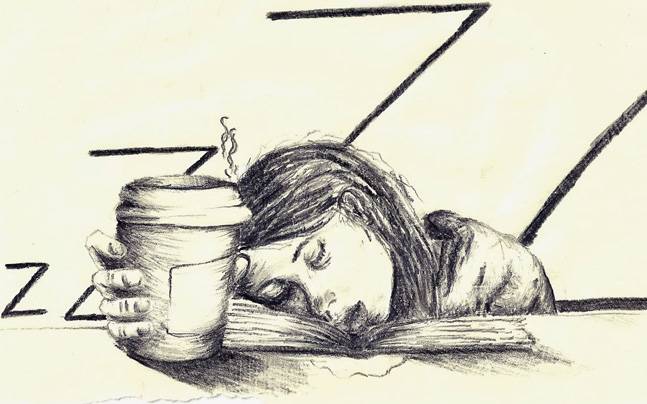 There’s no doubt about it that high school students struggle with their sleeping habits.

Now what about IMSA students?

According to research done by Dr. Dorothy Bruck, a professor at the School of Psychology, Victoria University, most of the teenagers she interviewed for her research “spend periods across most days being quite sleepy.” It’s said that high school students should get around 10 hours of sleep per night. The Acronym drew on data gathered by IMSA’s Office of Institutional Research (OIR) and interviews with current students, and IMSA staff, to delve deeper into IMSA students’ sleep experience.

In the 2021 Challenge Success Survey, IMSA students reported sleeping an average of 6.7 hours per night. According to the survey, the majority of IMSA students report going to sleep sometime between 11:30 pm and 2:00 am on weeknights and waking up at 8:00 am or later on weekday mornings. Danica Sun, a sophomore, says that she gets an average of four to six hours of sleep a night. Maggie DiMarco, another sophomore, gets around six to seven hours of sleep a night. Upperclassmen like Nadia Ludwig, a senior, tend to get more sleep. Ludwig gets six to eight hours every night, and Pranav Patel, a senior, gets seven to eight hours a night, during a good week.

Many students brought up IMSA’s 10:00 check when asked why they sleep so little. Sun says that usually she would have been ready for bed by 10:00 p.m. “But, instead, I’m always out until check,” Sun says. Because of that, she doesn’t start her homework until after check every night, which keeps her up until at least midnight most nights, as she has roughly two to three hours of homework to do a day.

Nandana Varma, junior, states that she’s in meetings for extracurricular activities and socializing with friends all the way until 10:00 check. She explains that she doesn’t start her three hours of homework until after 10:00 check most nights.

Mrs. Tracy Townsend, an English teacher for 17 years at IMSA, explains that many students have clubs, friends, and sports that they want to keep up with, all of which are keeping them out very late and causing them to sleep later. Townsend, however, doesn’t necessarily think it’s a negative thing. “The social aspect of IMSA is a feature, not a bug.” She explains that many students come from fairly good schools as it is. Students are more attracted to the residential aspect of IMSA than to its academics, in her opinion.

Ludwig spends 20 hours a week on extracurriculars. She says that she’s managing it quite well, though, even if she does think it might be slightly too many.

Living Away from Home

Kylie Marsden, the 1506 D wing RC, explains that she thinks that many students sleep less when at IMSA because they’re living away from home.

Sun explains that not being at home has caused her to sleep less. Usually, Sun would have to be ready for bed by 10:30 p.m. because of the living arrangements in her house. At school, though, she can stay up as late as she’d like without disturbing people, allowing her to sleep less and less.

Other students, though, would clearly disagree. Patel says that living away from home has actually benefited his sleep schedule. “I think that… coming to IMSA has benefited my sleep schedule, but that’s not a high bar by any means,” he says.

Ludwig says that living away from home hasn’t disrupted her sleep schedule but rather given her “an opportunity to become flexible with it.”

DiMarco agrees with both Patel and Ludwig, explaining that no matter where she’s sleeping, it doesn’t quite matter. “I’m fortunate to have that, ‘cause I know some people have had trouble sleeping.”

The Death Culture at IMSA

Be the first to comment on "Sleep at IMSA"