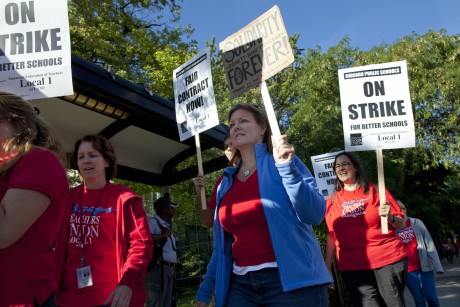 Teachers walk the streets of Chicago while on strike.

As many of you may have noticed, quite a few teachers are missing from IMSA; whether it be for illness or personal reasons, we usually have a couple teachers out at a time. However, if we look a few miles north, the entire city of Chicago is completely out of teachers. That’s right, more than 400,000 student currently don’t have teachers. Why? They are out on the streets protesting the recent decisions of lawmakers. Many teachers were against Mayor Emanuel’s proposed reforms to the school system which included forcing teachers to have evaluations depending on their student’s standardized test scores. Many issues such as this one have been under heated debate for months at a time and are often discussed through the labor unions. Yet, after contract negotiations broke down last night after failing to meet the midnight deadline, teachers walked off the job this morning. Teachers walk the streets of Chicago while on strike.

The problem is that the state, especially one so in debt as Illinois is currently, can only offer so much, and when the teachers demand more, the state cannot match it. The teachers refused a 16 percent pay raise over the next four years in addition to other benefits, demanding more. Chicago Teachers Union President Karen Lewis says, “there hasn’t been enough movement on job protection, class sizes and teacher evaluations,” and that “we demand a fair contract now, and until there’s one in place that our members will accept, we will be on the line.” The repercussions of this event could be seen as far as the upcoming election, as the Obama Administration may be looked down upon given that Emanuel was the former administration chief of staff. The Chicago Tribune reports that 144 of the district’s schools will be staffed tomorrow with non-union employees to provide meals and services.

This story will be updated as more news is released. Are you from Chicago? Have a sibling in the Chicago public school system? Feel free to discuss your own experiences and the implications this movement has for you, your family, and your home community in the comments section below.

Be the first to comment on "Teachers Fight Back – The Chicago Public School Strike!"