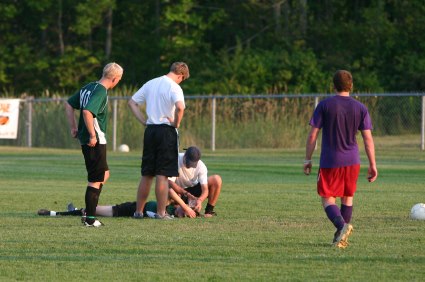 The topic of concussions has come up much more frequently in recent years. Yet too many individuals are still ignoring concussions despite efforts to inform athletes.

The University of Pittsburgh’s Department of Neurological Surgery reports that over 300,000 sports related concussions occur annually. They also feel that the true number is much higher due to the fact many athletes do not admit to having suffered a concussion. So while you yourself may not have ever had a concussion, you may have witnessed an athlete suffer from a concussion without being aware of it.

A concussion can result from a simple bump to the head during a sporting match, or even from just banging your head against the wall with the frustration of not having that essay completed. A concussion is not at all limited to when an athlete is carted off the field. A small headache, dizziness, slurred speech, or a lack of concentration after a blow to the head are indicators that an athlete may have very well suffered a concussion. These signs need to be reported to a coach or trainer no matter if they result from a devastating collision on the field or a simple fall to the ground.

Unfortunately, these symptoms are not always reported as individuals are unaware of the potential medical consequences they represent. In fact, an ABC News report found that the majority of concussions that occur at the high school level go unreported to an athletic trainer.

It is imperative that you report any such signs immediately to your coach and/or trainer. Delaying needed medical attention increases the possibility of further brain damage and limits the effect of any future treatments.

Too often an athlete follows the notion that he or she is ‘too tough’ to sit out or that he or she only has ‘a small headache’ that isn’t a significant concern. In this situation, a participant may think he or she can stay in the game, but playing with an untreated concussion unnecessarily risks further harm to the player’s brain. It is the responsibility of the athlete to step up and alert the coaching staff of the occurrence. Proper (and necessary) treatment cannot be given if doctors do not receive accurate patient information.

If you are an athlete or a coach on the field and see a player with concussion symptoms or one who has suffered a head injury, then you need to talk with that player about it and make sure the medical staff is aware of the situation. No injury to the head is too small to report.

(Thomas Rotter is a Junior at Naperville North High School)

Be the first to comment on "Concussions in Sports"