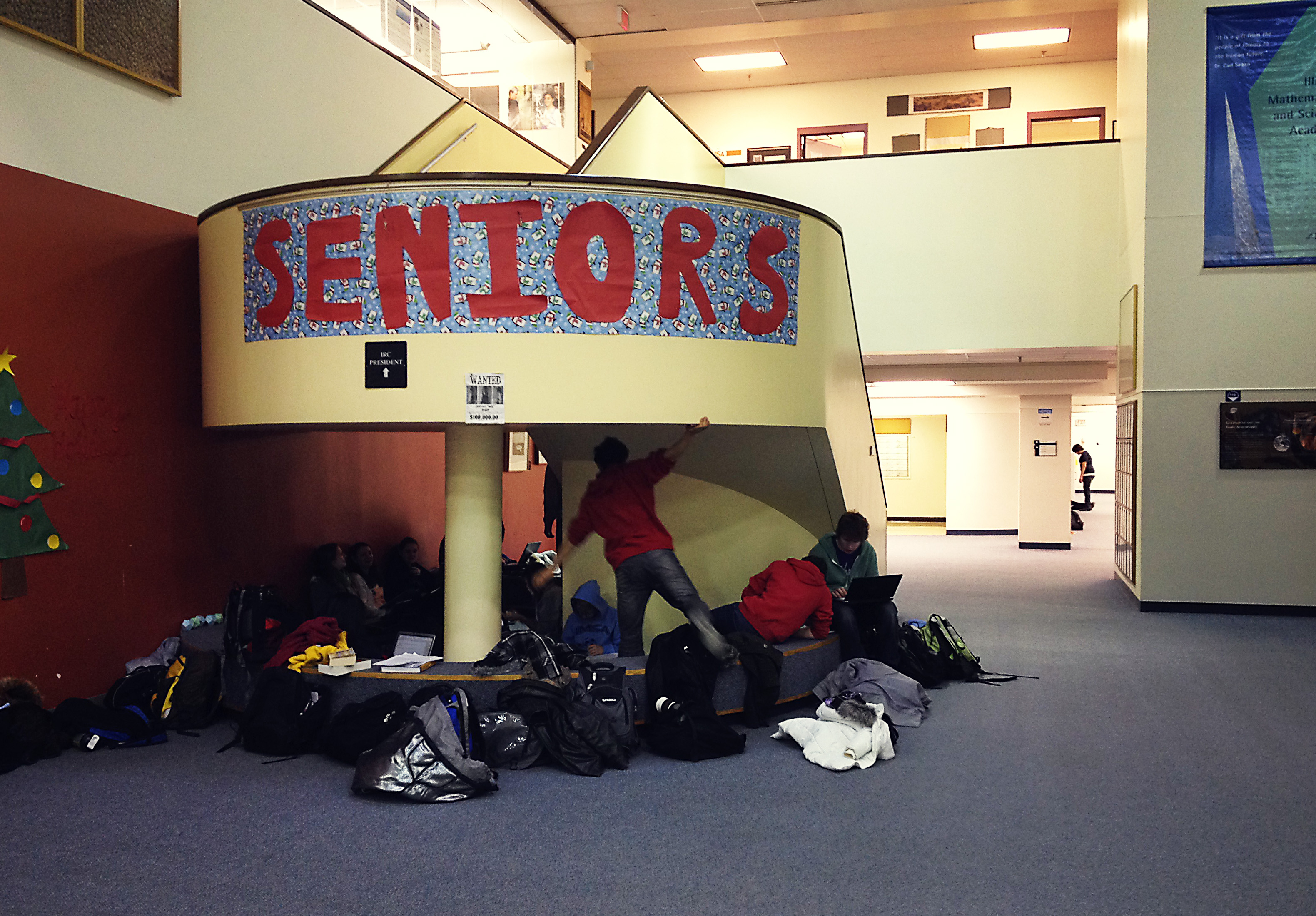 Republish of an article by Kevin Chen ’10 in light of the graduation of IMSA’s 25th class today. Drawn from the Acronym archives of 2011-2012.

To all those on the cusp of graduation; all the sentimental types clinging to vestiges of the sophomoric years; all the repressed young adults clamoring to escape from pre-collegiate imprisonment and into dreamworlds of booze-drenched debauchery; all the wide-eyed and bleary-eyed newly minted college students continuing the journey onward in formal education;

To all those for whom independence is coming too soon or not soon enough, and all those speckled in the hues of anticipation and anxiety and uncertainty in between;

And also to all those whose trek to liberation is only just beginning;

The end will come, counted in the minute-sands of your personal hourglass, and when the gates to the Academy are shut behind you, they are sealed for good.

That transition from student to alum is more abrupt than you might think, hastened all the more by solicitations for donations that seem to arrive within days of your diploma. Only two years after graduation, I’ve already received glittering invitations to a dozen reunions and galas and banquets and receptions and sent all of them to the recycling bin. Alumni status starts promptly from Post-Graduation Day 1, and the outreach network at IMSA is keen to remind you of that fact.

It is difficult at first to stomach that label, a label that also belongs to hundreds of others who could have been my parents. But the reality of alum-hood is clear. To return to IMSA is to return to a place that recognizes you and yet holds you at a distance, a former home that has locked up all the doors and windows and left the keys in the pockets of a new generation of residents.

And especially in the inner workings of the Academy, where students continue to skirt curfew and somehow wake up for 7:55 a.m. classes (or so I imagine), the separation between past and present is evident. I know nothing of novice teachers and restructured courses, of evolving standards and new regulations. I am blind to the IMSA world of teenage intrigue and angst, ignorant of infatuation and heartbreak and frustration and resignation and all the other emotional landmarks that contour their lives.

I have little to say about IMSA because IMSA is past my time.

With the Commencement of the 24th Class of the Illinois Mathematics and Science Academy, the last class that knew me as an upperclassman will be leaving, and with them, whatever legacy I left behind is being quietly ushered out the exit. Those who learned from my strengths and weaknesses, who inherited organizations I once headed and who have corrected, tweaked, smoothed out the kinks of my past achievements and letdowns—all of them have created legacies of their own that, one day not too far in the future, will also depart the Academy halls. Perhaps teachers, those bastions of education that transcend the ebb and flow of classes, remember—but even the names and quirks of favorite teachers sometimes vanish from my mind, and I imagine that my image often vanishes from theirs. After all, there will always be another group of students to meet and critique and tidy up before sending off to the real world.

It is horrifying and sobering to realize that three years spent growing inside The Bubble are so readily encapsulated and tucked away in the storage recesses of the mind. But it is perhaps the nature of humanity to live in the present at the cost of the past. It is the dilemma of the artist who is immersed in the process of layering brushstroke after brushstroke and becomes suddenly very aloof when the painting is framed and hung; it is the irony of the performer who reaches the finale and is thrilled, then shocked, then curiously apathetic about the act of finishing as the applause from the audience dies down. We are alive in the moment of doing, in the execution of the action, and upon its completion, we are somehow surprisingly detached.

There was once a litany of criticisms regarding grading bias or student laziness I could have slung at the garish orange walls and clashing carpet, but those have all disappeared with the indifference and inurement of time. The happy memories of cultural showcases and naps in the Old Café have blurred into haze before the eyes of a wiser man with more worldly experience and more important things to do with his life. Or so I regret is the case. IMSA will continue to send invitations to special events—some years later I reckon I’ll attend—but nostalgia for the high school days will be short-lived; as we grow older, we move on, and we let go.

I am now finishing sophomore year at a college that I very much love, and in just two months’ time (two months’ time!), I will be halfway out the door. There has come the shock, the brief paralysis of the realization that what is so much a part of my being and my essence and my happiness right now will be eclipsed by other things in the future. There has also come the bittersweet acceptance. To the students of IMSA, who love or hate their school, who desperately clutch onto their final days or yearn for emancipation, who nonetheless breathe and dream the rounded corners and ceiling-less walls of the Academy, it will be over when it is over, and life goes on all the same.

Kevin Chen was a former Editor-in-Chief of The Acronym. He may be reached at kevin.chen@yale.edu.

Be the first to comment on "Locking the Doors"