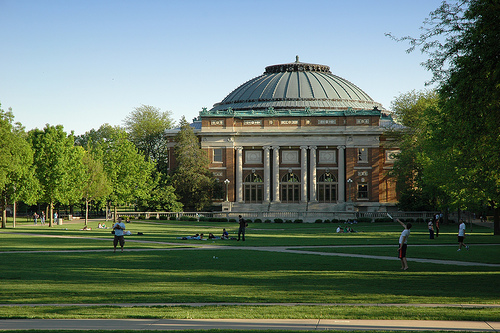 Although many IMSA students regard admission to the University of Illinois-Urbana Champaign as guaranteed and easy, the 600 Chinese exchange students who will soon call the university ‘home’ have described it as their dream school. Making up nearly 10% of the freshman class, the students will major in math- and science-related fields ranging from engineering and computer science to chemistry. The number of international students at UIUC is so large that, in fact, the university has more international students than any other public university in the United States.

Each year, China sends the largest number of undergraduates abroad, increasing from 128,000 in 2009 to 235,000 in 2012. The increase in students was expected because many households are composed of one child and two working parents. To them, the investment in education is affordable. The students are even willing to pay full tuition, a minimum of $31,000 per year, for education at U of I – not including housing. In fact, some families save enough to pay $50,000 yearly university tuition while living in moderately-sized houses.

However, the students are not the only ones benefiting from studying abroad: last year, international students contributed $211 million to the campus budget with over half of that coming from the Chinese exchange students. University of Illinois-Urbana Champaign President Robert Easter admitted, “It brings dollars into the state. That can’t be our primary objective, but it does contribute to the state’s economy.”

Overall, Chinese exchange students come to the U.S. for different reasons. According to the Chicago Tribune, students in China are urged to choose professions based on skill while there is more freedom of choice in America. One Chinese student said, “College life in the United States is more free. I didn’t have to decide my major before I attended university, and to be honest,  I am still not clear about what I am most interested in.” Meanwhile another student said, “I am bored of taking exams in China, and many teachers only emphasize grades. It had no meaning. I would like to study in America to find a more challenging education curriculum,” referencing the National Higher Education Entrance Examination, an exam similar to the SAT but lasting 2-3 days. Many students hired tutors to prepare for the SAT; international students scoring lower than 550 in critical reading and writing are not considered for admission.

This summer, three full-day orientations were held in China (Shanghai, Beijing and Guangzhou) to help make the transition smoother for the upcoming 2014-2015 school year. The students and their parents learned everything from what to pack (‘Girls, do not bring umbrellas for shade during the summer’) to the visa application process. Excited for the coming year away from home, U of I education is an open door of opportunity, a dream come true. Be thankful for the opportunities you’ve been given; these Chinese Exchange students would take the “guaranteed admission” in a heartbeat.