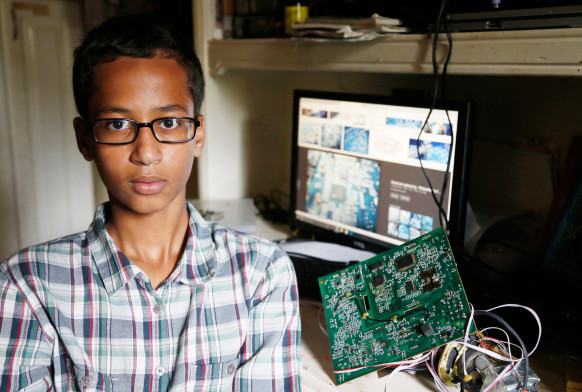 The recent events involving Ahmed Mohamed and a supposed bomb threat have raised some pretty significant questions regarding Islamophobia in America. Everyone’s heard the media-encouraged story about the 14 year old Islamic kid from Irving, Texas who brought his made-from-scratch clock to school, and who (after some potentially racial biasing) was arrested and suspended on the grounds of bringing what appeared to be a bomb to school. This was obvious racial prejudice; while many young scientists and engineers are praised for their work, Ahmed endured exaggerated, unfair treatment because of his skin color and beliefs. We live in what we believe to be a civilized first-world country, and yet lapses in our judicial and political systems like this reveal its flaws. Among these is the inherent racism present in many areas of the U.S., and not enough is being done to change it.

Media outlets and social media sites worldwide have blown this story up, causing it to trend on such popular sites as Facebook, Twitter, etc., with the commonly seen tag #IStandWithAhmed. Now, this reveals something great about our culture: when people are unfairly treated, the world is able to find out. And yet, to some extent this story is being blown out of proportions for the sake of a story. Everyone bands together over the unjust sob-story of a poor kid who just wanted to invent things. Not many of those people have any idea what his invention actually looked like. For those of you who don’t know, this was the clock that Mohamed brought in. Generally speaking, this isn’t the type of thing a teacher would see and automatically assume to be a clock. Quite frankly it looks like something that could be a bomb. The media’s representation of the incident allowed for a convenient story that people could easily be offended by. As stated before I do believe that this incident was grossly mishandled by the police and school, however there is some sense behind their actions.

As stated before, we live in a time where peoples’ actions are easily shown to a world-wide audience. This has allowed for much more globally-aware citizens. And yet, people don’t always take the time to understand the full scope of a situation. Would this have happened to a Caucasian student, or a student in a different part of the country? Perhaps. Yet regardless of potential racial biases, unfair treatments, or bomb-shaped clocks, it is important for one to really look into a situation before making judgements.

Be the first to comment on "Form Your Own Opinions"