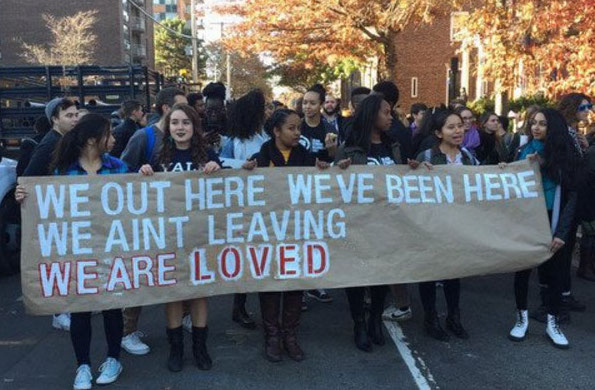 Before Halloween, an email was sent to the student body at Yale University telling students to avoid wearing offensive costumes like featherheads, blackface, or turbans. However, one member of the faculty had a problem with that email. Erika Christakis, an early childhood education research who supervises the residential life on campus, wrote an email in response giving her reasoning why “offensive” costumes can be considered acceptable. She wrote, “Free speech and the ability to tolerate offence are the hallmark of a free and open society”. She also wrote that her husband Nicholas, who also aids her in overseeing the residential community, agreed with her and that these “offensive” costumes can start conversations between students. This email sparked the rising tensions between those who say freedom of speech should be valued over sensitivity and those who believe the Yale campus should be an inclusive space. One student even lashed out at Nicholas Christakis, saying how his beliefs go against his responsibility to make the campus a home to all students.

Along with the email, other disputes came up with several undergraduate students saying they were denied entrance to Yale Sigma Alpha Epsilon party the night before Halloween because they were not white. The fraternity has denied these claims but administration is still holding an investigation. On Monday, over 1,000 Yale students marched across campus protesting how racial tensions in the past and present have divided the campus. The students repeatedly chanted, “We are unstoppable, another Yale is possible” and other similar slogans. Called the “March of Resilience,” this protest also coincides with the controversies at the University of Missouri. President Timothy Wolfe and Chancellor R. Bowen Loftin both stepped down from their positions recently under claims of discrimination against black students. Many students are saying these incidents are the only beginning of dismantling discrimination in school administration.