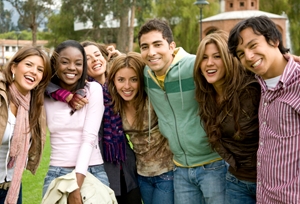 Without a doubt, IMSA stands out from other high schools in America for many reasons. One of those reasons is the school’s diversity. The valuable thing about IMSA’s diverse culture is that it prepares students for going out into the working world and interacting with people from different cultures and walks of life.

Some schools are more diverse than others.  One cause of diverse school demographics would be where you live. Because schools are controlled by districts, where a student lives determines which school the student attends. If you live in an affluent district, you would attend a good school, and if you live in a poor district, you would attend a poor school. This limits class or economic diversity, because often only children of higher socioeconomic backgrounds would attend the better quality schools in their district, while only children of lesser socioeconomic backgrounds would attend the poor quality schools. Similarly, schools are populated with children of the same culture. The conditions described previously often translate into racial and ethnic groups. Hence, you have schools predominantly populated by people of the same ethnicity. The situation leaves families with no choice other than to send their children to the neighborhood school that is not necessarily known for excellence in academic programs, or athletic programs, for that matter, and in fact, not equipped to help students succeed. This means there are fewer opportunities for students with those backgrounds to succeed in school and, maybe, even in life.

However, IMSA is different. You have probably heard many people say that, but here’s another context in which the statement applies. IMSA is a place of opportunity for everyone who is willing to work hard. It does not matter where you live—you could be a brilliant kid from a poor neighborhood who would not have had the opportunity to go to a good school where you could become successful academically, but IMSA gives you that opportunity. Another way to look at it is that IMSA is a great equalizer, because it gives the same opportunity to everyone who is willing to work hard, no matter what your background—economic, racial, or ethnic. This is why the government should not cut IMSA’s funding, but should increase it instead to preserve this rare opportunity, and help IMSA reach more students who do not have the opportunity to succeed and reach their full potential.

The reason there are so many people from different cultures at IMSA is because one of the school’s principles is to ignite and nurture creative, ethical, scientific, and diverse minds that advance the human condition, in order to expand and support a diverse workforce in the STEM field. This demonstrates how kids who are from poor neighborhoods and family situations, otherwise at an  economic and political disadvantage because of who they are, have a chance to apply themselves at IMSA. Some have excellent potential and just need a place where they can use it; some have the potential but are dealing with the disadvantages of their economic status and thus need some help bringing out their full potential.  Either way, IMSA opens doors for these people, either through enrichment programs or just through direct application. This is how people from different cultures, economic situations, and walks of life can come to IMSA and work with others, using their skills to make the world a better place for everybody.

So, with so many different people on our IMSA campus, students learn how to work with other students from different places and cultures and thus are prepared to work with people from diverse cultures globally. While a typical kid would go to a school that was 90% one race and 10% another race, an IMSA student would be around and work with 50% of one race, 30% of another race, 10% of another race, and 5% of two other races or economic backgrounds. True, there will still be minorities at IMSA, as there will be everywhere, but IMSA is narrowing the gap more than any other school in Illinois. At IMSA, those “minorities” and “majorities” don’t stand out on its campus as much as elsewhere.  This is the strength of IMSA.

Be the first to comment on "The Advantages of Diversity"