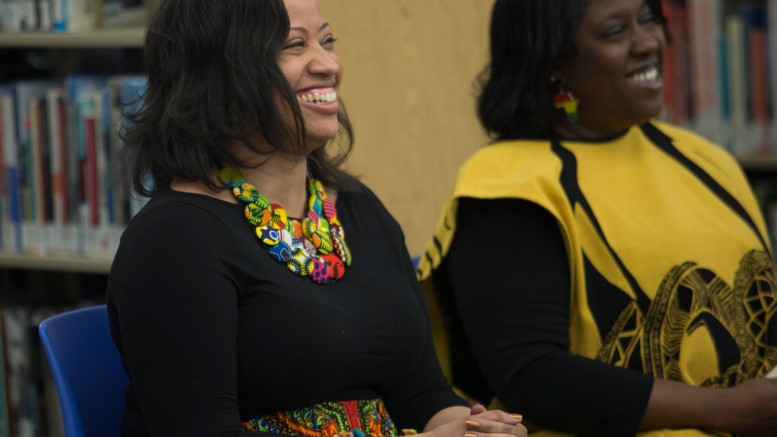 “Negro blood is sure powerful? Because just one drop of black blood makes a colored man. One drop? You are a Negro! … Black is powerful.”    — Langston Hughes

On February 29th, IMSA held its second annual African American Read-In, an event made possible by AASA, PME and IMSA’s English Department. This event features the work of African American writers and poets that have left their mark in the literature world by capturing the culture and history of the Black community.

Guest speaker and IMSA alum Tiffany Gholar read two chapters out of her novel, A Bitter Pill to Swallow. A Bitter Pill to Swallow revolves around the lives of troubled teenagers as they ultimately learn to embrace recovery and themselves. Gholar has also written three art books and is a Chicago-based artist, interior designer, and writer. Below is an edited transcript of our conversation:

What was your experience like at IMSA as a student and what were some of the things you were involved in?

I worked in the IRC. I was involved in AASA and I was part of a Writers’ Club. I remember we had poetry readings…we would meet in the TV Pit and the Academic Pit and read each others’ poetry and stories we had written so it was really fun.

What inspires you to write?

[A Bitter Pill to Swallow] came from a lot of different influences and inspirations from some TV shows I had been watching at the time to the events happening in Chicago that I had read about and they just all kind of came together. I guess you can find ideas just about anywhere.

How do you feel about the current diversity at IMSA?

Being here, the diversity was one of the things I could appreciate and I learned so much about other people’s cultures and then they learned about ours. Like we had a Kwanzaa thing for AASA that we did every year and different students would come to our Kwanzaa thing and we would go to their Lunar New Year event and Diwali. My roommate, who was also African American, befriended students who were doing Diwali and also got involved in that. I had never heard about Diwali before until I came to the event and tried some food and it was just really interesting learning about what other people are doing. So yeah it was really good being a part of such a diverse community.

How have your background, culture and experiences affected your writing?

I think when I initially wrote this book, I didn’t see a lot of fiction about teenagers who were like me and I wanted there to be something like that. So basically I was writing a story that I would have wanted to read as a teenager – that’s how I started it out. I drew from my own particular background and also, just all the interesting people that I met at IMSA with it being so diverse. I definitely wanted to make sure that the characters in the book were as diverse as the people in the world that I was living in. My main three characters are African American but I also have White characters, Latino characters, Asian characters, Arab characters, so just like life really is, at least in the Chicago area.