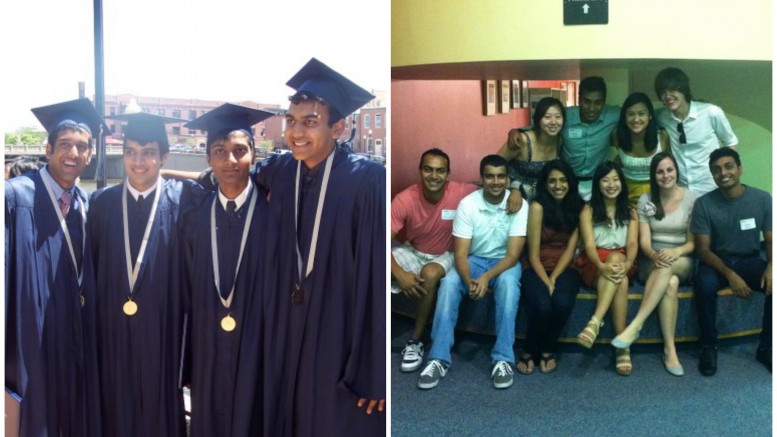 I was in first grade when my brother, Arth Srivastava, left to attend IMSA. Ten years later, I find myself following the same path.  I use my brother as a time machine, exploring the foreign yet familiar 2000s. And while we like to believe in the antiquity of this institution, in reality, so many organizations are in fetal form. “I don’t even remember having Wing Guides or CDs. They might’ve been there, but probably weren’t a huge part of the wing,” his wife, Ami Srivastava, Class of 2004, claims. “They were definitely influential during sophomore year, because they were the first upperclassmen we met. But after that, they were just other members of the wing.” That’s a drastic difference when compared to the prominent role RSLs have in 2016’s res halls. The role of an RC, however, has scarcely changed. A proud member of 1507, Arth explains “Q [Quintin Backstrom] was like a brother. A lot of the other RCs leaned more towards being more like disciplinarians.”

And as a 1507 member, it was clear that one event should stand out above all other IMSA experiences: “I remember my senior year, I think it was the second year of Clash of the Halls, we tried going for 0 points. But someone messed up, so we ended up with 5 points.” Clash 2006 was held from January 30th-February 3rd, with a hyped up Pep Rally on Monday to start the week off. Events included a Twizzler run, worth 20 points, a pie eating contest, worth 15 points, limbo, worth 20 points, and, of course, Drill Team, worth the grand 100 points. Rather than Homecoming, he describes “Clash of the Classes”, a much bigger event that ran for many years before Homecoming.

Arth describes “work service” as the 2006 version of service learning: “Every person was assigned a work service to be done every week throughout the entire 3 years. I was lucky, and just had to grade problem sets, and eventually become a peer tutor. But my roommate had to vacuum the main building.” Ami, the 2004 Synergy Coordinator – a cousin of the current LEAD program – describes being able to get out of “work service” because of her role on the Synergy team.

These similarities and differences, however, are not limited to campus organizations, but stretch to social life: “There were definitely hall stereotypes. I remember 05 being the jock hall. Or the kids from downstate, because they always stayed the weekend, either for sports, or because they had to. 01 was the nerdy guys hall, and 07 was just the laid back guys who played a lot of Counter Strike.”

Moving past simple nostalgia, Arth offers insight into the benefits Residential Life has that can be easily taken for granted: “It definitely prepared me for college: learning how to live with a roommate, arrange study habits, balancing social and academic life. For other freshmen, this is their first time leaving the house, so it took longer for them to figure themselves out, while I just hit the ground running. The thing that was hard to adjust to was not having 10 check.” And as the college community is inevitably more vast than that of IMSA, he comments on cherishing what we have: “There’s nowhere else in your life where you’re going to be forced to hang out with the same group of people every day after 10 PM. In the future, wherever you go, there are going to be 10 times more people around you.” He elaborates on the best parts about residential life, saying, “You always have people you can go to, whether it’s for late night talks or help with homework. It was the first time I felt like I was in a community where I knew everybody was going through the same hardships and stress, and we were in it together. You’re going to miss the intimacy. The friendships you make there are some of the strongest. Some of my wingmates are still my best friends.”

Beyond explaining the intricacies of 2006 IMSA, Arth offers advice and experience we can only hope for down the road. “Don’t take each other’s stress too seriously. Even if people get offended or angry easily, don’t take it personally. It’s hard living with people sometimes, especially having a roommate. And when they get on your nerves, that’s no call to end a friendship. You have to accept each other’s flaws.” Ami adds, “And don’t get too cliquey!” Reflecting on how IMSA has benefitted them down the line, they both mention IMSA’s everlasting network of friends: “Don’t take it for granted! It’s such a supportive environment and you meet so many people who are going to do such cool things in the future. So keep in touch with everyone, because you never know who can help you out or you can bond with.” Arth also reflects on his relationship with Ami, years down the road: “Ami and I didn’t start until 8 years after IMSA. So just utilize that IMSA network, because you never know.”

Overall, they reflect on how IMSA has shaped them: “I’m most grateful to IMSA for allowing me to not be intimidated by people who are smarter or more driven. It gives you the ability to accept yourself. And right now, you don’t feel great about it, and you might not have confidence. But down the line, you’re going to look back on it and just think ‘everybody is smart, but I made my way through it, and grew as a person because of it.’”

Whether it be an interview with alumni, or delving into the archives, the IMSA community holds a rich past that, through small stories and meaningful advice, can shape our present. With all the good memories, existential moments, and hard times we’ll be going through during this rollercoaster of an experience, it’s comforting to consider the shoes that have walked the path before us.  While it is important to accept the past as part of a community, it is more important to accept a community as part of you. It is how we can enjoy and revel in these experiences that make them unique and irreplaceable in all of our hearts. “Cherish it,” Arth concludes. “There is no other place like it.”

Be the first to comment on "Blast from the Past: Residential Life circa 2006"