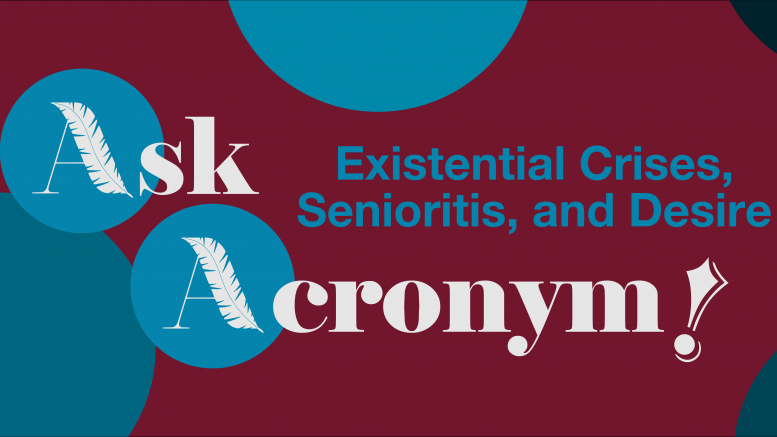 That is the question.

Question: A, quite frankly, ugly person asked me to prom. Help.

I’m assuming you don’t want to go with this person. Be honest with them and let him/her know that you’re not interested in going to prom with him/her. This person deserves to go to prom with someone who wants to go with him/her and doesn’t judge him/her solely based on appearance.

Question: I think I nitpick at people. I can’t seem to stand the same people I used to, and it’s sad watching myself do this.

I feel you; I do the same thing. I think everyone tends to lose patience with some people eventually, and that’s okay. It’s okay to not like someone as long as you’re not rude to them or quick to judge. You’re not meant to like everyone you come across, so it’s okay. Another thing for sure is that people change, and just because you liked someone before doesn’t mean you always will. Don’t be afraid to hang out with a different crowd, or even by yourself.

On the other hand, if you want to be able to stand the same people and stay friends with them, force yourself to try to hang out with them one-on-one and understand them more. People change people. Maybe hanging out with you can turn that person into someone you like to be around.

Question: There’s this guy who keeps looking at me in the fitness center. I don’t know if it means anything, but every time we are there at the same time, we have awkward eye contact. I’ve never talked to him either. What should I do?

Creepy. I guess I would take a friend with next time. If this person is making you uncomfortable maybe have your friend approach him and say something? It’s kinda hard to say in a situation like this.

Question: I have a really bad case of senioritis please help.

Me too, dude. What’s helped me is biting the bullet and doing my homework right after school so that I don’t feel so guilty when I’m tanking later. Just remember that as soon as you finish your homework, you can be lazy without the guilt!

Question: My friend won’t admit that she’s in love with a junior boy, even though we all know it’s true. He loves her too. How do we get them together?

I guess I don’t have a lot of experience in this. Spring Fling is coming up! Have her ask him to that. Dances are a good way to start things off. Don’t try and force it too hard, though; that might make them uncomfortable. The dance is a good place to start.

Question: I like this girl. I think she likes me back. She barely talks and when I see her she is always infatuated with her phone and I don’t feel like bothering her. What should I do?

Walk up to her, and demand that she look at you the same way she looks at that beloved phone.

If that’s not your style, then just say hey while calling her name out. She may just be on her phone because she feels awkward otherwise, and she’s probably not doing anything important so don’t be worried about bothering her. A lot of people feel uncomfortable while walking somewhere alone or sitting alone, and it may just be part of some anxiety she has, so don’t be pushed away just because you always see her on her phone. Most likely, if she has someone to talk to instead, you won’t even see her glance at her phone.  Plus, If she likes you, she’ll probably prefer it if you actually try to talk to her. She just needs to see you try, and then she’ll try, too.

On a side note, if you like her, and you think she likes you back, why not just tell her you like her?

Question: My roommate is a horrible person. We’re going to room together next year. We’ve filled out the forms already, but I don’t know if I can stand another year with her. What should I do?

Considering that the housing form was due last Friday, I hope you found the courage to talk to her about it. Like I told the prom guy, it’s better to have a really awkward conversation for a few minutes than spending another year rooming with this person. In these situations, as long as you’re honest, the other person usually understands. People are reasonable, and she would probably appreciate your honesty. If you ended up rooming with her, don’t worry! You should talk to her about what you want to change in your relationship as roommates. While I don’t recommend this, remember that you only have to sleep in your room. If you can’t work things out with this person, it’s not like you have to be with her all the time.

Question: How do you know if someone just doesn’t want to talk to you anymore? What do you do? Should you stop talking to them or confront them?

My advice would be not to try and guess people’s motivations for saying everything they say; that just makes things worse. If this friendship means a lot to you, go confront them. They might just be going through some stuff and talk to you less for that reason. Don’t assume.

How to IMSA: Looking Forward

Ask Acronym: First of the Year!

How to IMSA: The Impostor Syndrome