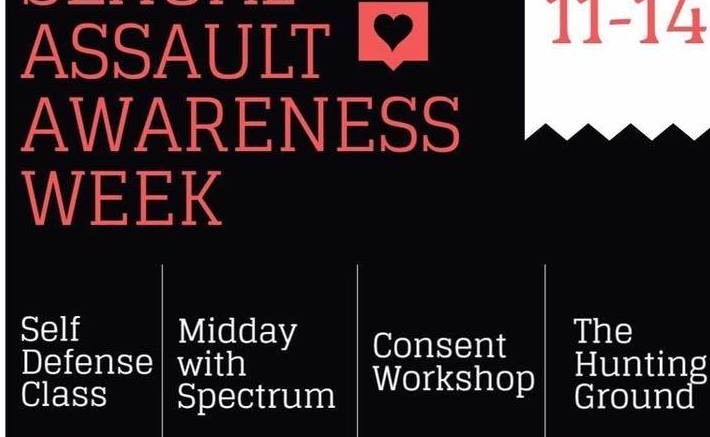 A subtle advocate of detrimental behaviors and attitudes, aspects of rape culture have been rooted in the crooks and crevices of U.S. media, education, and lifestyle for decades.

This week (4/11-4/15) is Sexual Assault Awareness Week. Throughout the week BELLAs hosts both midday and evening events designated to raising awareness about sexual violence. This week especially, I felt the need to look more into rape, a growing issue in the United States and in the rest of the world. In just the past years, we’ve heard about brutal child and adult rape cases occurring in the U.S., Sweden, India, etc. Some have more attention, while the majority of cases, hundreds of thousands of them, are left unreported, downplayed, and even ignored. The Rape, Abuse, and Incest National Network states that each year in America there are about 293, 000 victims of sexual assault. 44% of these victims are under age 18. 80% of the victims are under age 30. According to the Bureau of Justice Statistics, rape rates have been steadily decreasing for the last two decades. While the number of known rape cases might have reduced, justice served to these victims remains buried as a combined result of legislative flaws and a negligent societal mindset.

The latter is something deeply perturbing and led me to investigate another issue: rape culture.

Rape Culture is defined by Marshall University as, “an environment in which rape is prevalent and in which sexual violence…is normalized and excused in the media and popular culture”, often due to societal expectations about gender and sexuality. According to the CDC, 1 in 5 women experience rape at some point in their lives, yet a horrifying 98% of rapists will never be convicted – if this is a result of our society’s mentality, could rape be an ongoing issue due to the prominence of rape culture? To generalize a bit, the majority of countries in the world seem to be progressively fighting towards various equalities. Years ago, I found myself naively dubious of rape culture because the idea that a society would shift perspectives and the legal system towards blaming and shaming a victim was just too detestable to be considered. In fact, I don’t think rape is necessarily “excused” in U.S. culture (to also generalize a bit), but I do believe that elements of rape culture exist in the U.S. and definitely in other countries.

In other words, rape culture is not explicitly developing in some societies.

Rather, elements of rape culture already exist and are ingrained in what we see, hear, and are taught since childhood.

There are various songs, social media campaigns, visual advertisements, and other media forms which advocate rape by inadvertently suggesting sexual violence, sexual dominance, and/or seizing control of another in vulnerable situations (read “Rape Culture and the Feminist Politics of Social Media” if you’d like to know more about this) . Something that is even more concerning is the educational approach towards sexual assault, which many of us have heard about or experienced – do you remember the old days in health class or those awkward conversations with parents? Do you remember being told not to be out too late, not to go out drinking, not to wear revealing clothes, or not to be alone? Even though some of the aforementioned are for basic safety concerns, how come we are educated more on how not to get raped, instead of focusing on the importance of not raping others? Bullying, shaming, assaulting – these topics are addressed at home and at school, but clearly not adequately. Plus, these forms of intimidation and coercion often occur in daily life at home and school and this affects the individuals (often children) who observe or witness it. It is common that young individuals will do nothing about witnessed assault, and thus their mentality becomes more accepting of it.

Most frequently, the repercussions of this rape culture are evident in the unjust treatment of victims. In the infamous Steubenville rape case in 2011, a 16-year-old victimized girl was blamed for being intoxicated, but the two football players who assaulted her were sympathized with after losing their football careers (on CNN and other media centers).

Now, it may be a stretch to label rape as a “cultural norm” in the U.S. Most people seem to perceive rapists to be terrible people – but the fact that rapists can be college students, often close friends/family, mentors, etc. seems to normalize our perception of rapists so they no longer are these “monsters”, and this may be the reason that blame is sometimes shifted towards the victim. Plus, rape is about power and control over another individual. Victims are often vulnerable and feel shamed after what they have been through, and society sometimes perceives them as devalued individuals, making it easier to shift blame upon them.

Rape is more common than most people know about, and it is up to us to support justice for victims and to reinforce teaching against bullying, power control, or anything that leads to the harassment and manipulation of others. Maybe we don’t have a definitely prevailing rape culture, but we, as a country and a culture, have an incorrigible system of dealing with and preventing sexual assault.