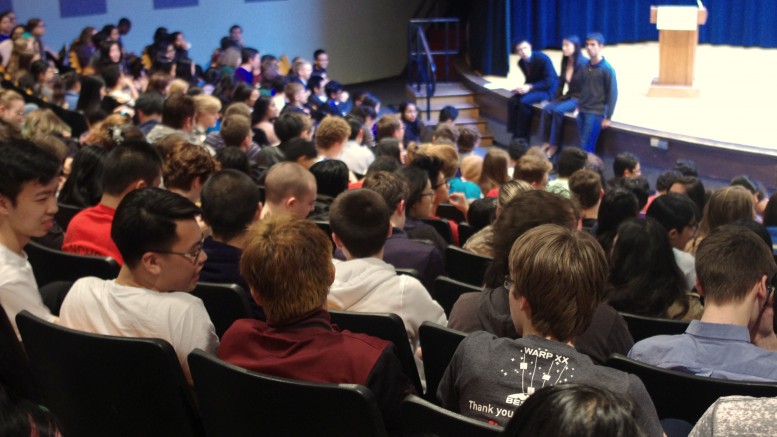 Student Council (StudCo) held its annual elections for Cabinet level positions last night in the Auditorium. Twelve candidates delivered speeches to the student electorate, with the winners for the 2016-2017 school year being:

Candidates’ speeches covered a variety of topics ranging from pitching themselves to project proposals to attempts at humor. Highlights from the night included Evan Sun (‘17) and Abinaya Ramakrishnan (’18) both beginning their speeches with references to the entrepreneurial world, Naomi Nakajima (’17) pointing to shortcomings of CAB’s leadership in the past year, and Sagar Nattuvetty (’17) electrifying the auditorium with a shaggy dog story spinning the tale of Gerald, his pencil and best friend.

Throughout the entire night, the candidates clearly agreed on one theme, as most clearly stated by Yoanna Ivanova (’17), a Presidential candidate: “Student Council does not always represent students. It represents the perceived needs of the student body.” Every single candidate called for increased communication between the student body and Student Council.

After the candidates concluded their speeches and the student body submitted their votes, students buzzed around Main Building, chattering about the elections. Some students saw the elections as a step forward, as Zach Ungerleider (’17) pointed out by saying “[ The elections] are always a bit of a popularity contest, though this year seemed to focus more on the issues at hand, not the people running – which is good.” Not all students agreed with this sentiment, though, as Elizabeth Tang (’18) observed: “The speeches spent too much time trying to entertain the crowd and not enough time talking about the issues. I liked Evan and Rebecca because even though they were uncontested, they still wrote speeches.”

While the student body was talking, the candidates themselves were also abuzz with anticipation in the most human ways imaginable. Nattuvetty described his emotions from the night as being intensely mixed. He said that, despite his rousing speech, he “has terrible stage fright. Every time I’d walk past the auditorium since Tuesday, I would get a wrenching feeling in my stomach.” Nattuvetty also described his reasons for wanting to run for StudCo Cabinet, saying “I’ve tried JCC. I’ve tried different clubs. All I really want is to make a difference at IMSA. That’s the goal.”

After this year’s Cabinet tallied votes, the current StudCo President, Heidi Dong (’16) reflected on her own feelings towards the elections and the candidates’ speeches. The outgoing President commented that “seeing students mention previous or current StudCo projects during their speeches shows us that we’re targeting problems that the student body cares about. We may have more to do, but it is promising to see that there is interest and investment in our work.”

Jin Komerska (’16), a current Hall Senator in 1506, encouraged people to get involved, even if they aren’t running, saying “If there is a problem you see with IMSA that you’d like to work with or if you have an idea for a project, talk to a StudCo member! If you want to work on a project, but aren’t sure what to do, StudCo has plenty of projects that they would be happy to have you help with.”

After a night of promises, IMSA students of every class are left with questions, hopes, and fears. On the mind of every candidate was an honest desire to make communication with Student Council, the Student Life office, and the student body as seamless as possible. This common goal seems to be in response to the student body’s perceived disenfranchisement with the administration and with Student Council.

Looming over the night was the notion that elections are a nothing more than a popularity contest, though that narrative is an oversimplification. The question of StudCo’s purpose also came up in a number of speeches and post-speech discussions.

With so many questions still lingering, one thing remains clear: as IMSA’s new StudCo President says, “IMSA needs someone who genuinely connects with people, and connects people on campus with each other.”

Be the first to comment on "Student Council Elections: Speeches, Buzzwords, and the Student Voice"