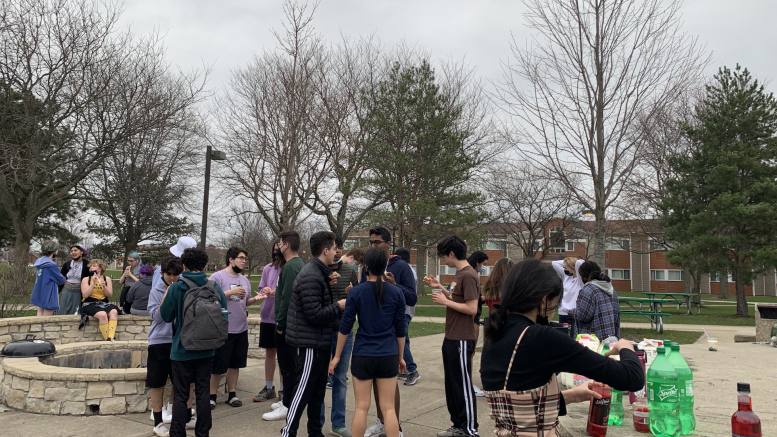 April is Sexual Assault Awareness Month (SAAM), a period meant to promote awareness and prevention of sexual violence. The theme for the 2022 SAAM campaign was “Building Safe Online Spaces Together,” which centers on the idea of advocating for “respect, inclusion, and safety” in digital spaces and for believing and supporting survivors.

Gender Equity Association (GEA) held events, such as an IMSA Student Productions Photoshoot, Nail Polish Event, Martial Arts Training, and a screening of “At the Heart of Gold” for its annual Sexual Assault Awareness Week from 4/25–4/29.

Leading up to the week, there were informational posters about sexual assault for IMSA students to view in the Old Caf. The first event that GEA hosted was a club collaboration with United Nations Children’s Fund (UNICEF)! The collaboration was a café fundraiser that took place at the 05 slabs during the evening. The sale featured both drinks and desserts. For drinks, there was brown sugar boba and Shirley Temples. For desserts, there were cake pops and donuts.

As for the event itself, it was a success! The turnout far exceeded expectations. While the weather was windy, the temperature was perfect for people to go outside and eat. All the cake pops and donuts sold out within the first hour, and many people enjoyed the boba and Shirley Temples. In total, GEA and UNICEF were able to raise $293.

The money raised by the GEA x UNICEF café fundraiser has been donated to the Zacharias Sexual Abuse Center in Gurnee, IL. The center is a local non-profit that serves as a crisis center for victims of sexual violence. They provide free, client-centered services to survivors as well as hold training sessions for people like first responders or medical staff who work closely with victims and offer community programs to spread awareness about sexual assault and prevention. Zacharias Sexual Abuse Center is a member of the Illinois Coalition Against Sexual Assault (ICASA), which offers funds and standards to a network of 33 rape crisis centers in the state.

If you or someone you know has been impacted by sexual violence, the National Sexual Assault Hotline is open to providing confidential support 24/7. The number is 1-800-656-4673. There is also an online chat resource at: https://hotline.rainn.org/online. More support services are available at: https://www.rainn.org/resources.