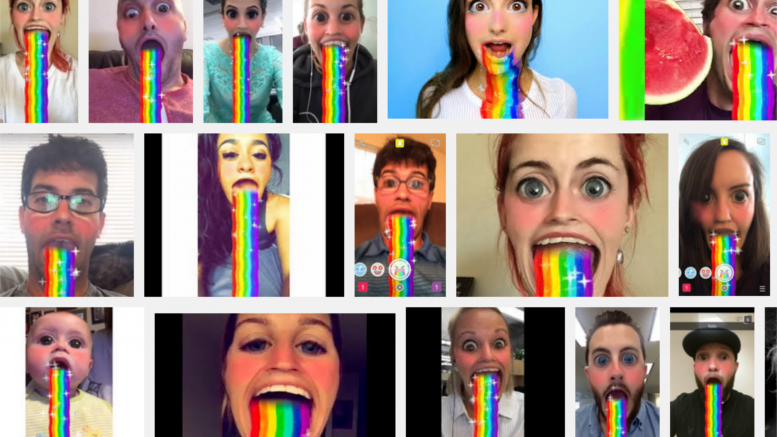 The immensely popular Snapchat app’s filters have become a commonplace sight on social media. Perhaps you’ve seen them: a cute pair of ears and wagging tongue, a mouth over someone’s eyes, two faces switched by some unknown means. Snapchat filters may seem childish or stupid, but in the months since their introduction, they’ve captivated, scandalized, and terrified a nation. Here, we’ll explore the impact they’ve had on society and why.

Snapchat introduced filters on September 15, 2015, with an update that read: “Before you take a selfie, press and hold your face for a surprise!” At first, people were puzzled by the somewhat cryptic instructions, but soon enough people began using the cute set of filters that magically transformed their faces. Filters ranged from adorable to hilarious to downright bizarre. If you need an example, just look at one of the filters out right now: a giant cat with big yellow eyes strapped to your head. As the months wore on, more features were added, like being able to add filters to people on the outside camera, swapping faces, and sponsored filters. Any young adult with a Snapchat account, or even with friends with Snapchat accounts, knows this story well. It’s hard to argue against the appeal of these filters; they’re fun and seemingly harmless. But sometimes, they create impacts that ripple across the entire country.

One filter has risen to the top as a fan favorite: “Puking Rainbows.” You’ve probably seen this before, but for a quick recap: your eyes enlarge, blush colors your cheeks,  a stream of multi-colored vomit falls from your mouth, and “Sparkling” sound effects are played. Back in November, when the world thought all filters were permanent, the unthinkable happened: that filter disappeared. There was an outrage that swept the internet as people demanded their barfing rainbows back.  After a while, Snapchat complied and made the filter available again- however this time, something even more unthinkable happened. Snapchat started to sell filters. Unsurprisingly, this made people even more pissed. In January, Snapchat closed down the lens shop and shifted its focuses to sponsored filters.

So why talk about this seemingly unimportant scuffle? In reality, although Snapchat may seem a weaker social media platform compared to giants like Facebook, Twitter, and Instagram, their actions still make significant ripples across the world. Huge news outlets like CNN, BBC, and ABC take notice and continually report when new filters are introduced, or when scandals like the ones above take place. Big name celebs are using the app, garnering more news as well- people are enamored with the love-hate relationship North West, daughter of Kim Kardashian, has with filters, or DJ Khaled’s infamous but strangely inspirational stories. With all this activity from celebs come more controversies, obsessions, and excitement. With all this excitement comes new features and more interest. It’s a never-ending cycle.

But perhaps the most interesting, and most controversial, filter of all appeared only a couple days before when this article was written- on April 20, 2016, Snapchat revealed a Bob Marley Filter. This was controversial in a lot of ways; people accused Snapchat of blackface, due to the dark skin that the filter plastered on the user. Others claimed it was disrespectful to Bob Marley to release a filter on 4/20, the day commonly known for smoking weed. Bob Marley shouldn’t just be shown as a pot head, people argued, but rather an influential and inspirational figure in music. This controversy was further inflamed when Kylie Jenner, another famous Kardashian sister, posted a video to her story of herself using the filter.

This example especially raises the question: what is Snapchat, and more specifically these filters, doing to our culture? Are they distracting us by making us spend more time with our phones? Or are they opening up a more complex and thought-provoking dialogue? In the Bob Marley example, one could argue both ways: on one hand, this filter was just a tasteless move by a company trying to gain more revenue; on the other hand, this filter opened truthful and necessary dialogue about the role race can play in our culture. In truth, we don’t have an easy answer. This will be something society will need to figure out on its own.

These filters are blazing a trail in our world that we’re not sure how to handle, as nothing so childish and silly has ever made this much of a splash. Who knows where this will go in the future? But if you have time today, try out a pastel flower crown, or have the face of the Mona Lisa pasted on top of yours. Who knows: you might just be writing history.