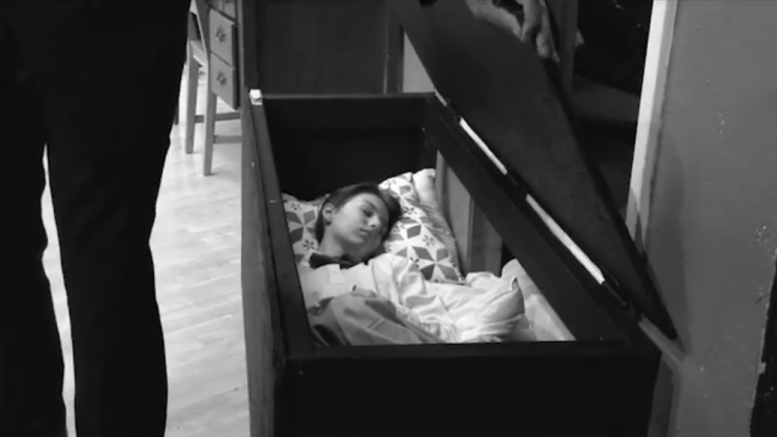 From trailer filmed by ISP.

I lost a ten dollar bill on my way to see Arsenic and Old Lace. Frankly, I was upset. Just getting to the play and sitting down ended up being a hefty process which left me agitated and exhausted. I had been looking forward to watching. Deflated as I was, my expectations were higher than ever.

I had trouble making sense of what was happening at first. I was thrust into the life of the Brewsters, a very, very peculiar family. Their “peculiarities” were eventually revealed as a cover to something darker — murder. At that moment, I perked up. The wine. The window seat. The dead bodies hauled across the stage. Now, I was truly engaged.

As the plot moved forward, I followed the story without ever stumbling in my understanding of what was happening. The characters kept me intrigued. Each persona was so unique; I could feel the schemes brewing in Catherine’s words, Dr. Einstein’s exasperated sighs, Mortimer’s anxious gestures. The plot moved in a way that the suspense was tangible and the humor was genuine.

The set was versatile and clean. I was impressed by how much story could be told by only viewing one section of the house — I’ve seen plays before that only focused on one section of a house for the entire play, and they were certainly not as successful with telling a cohesive, entertaining story as Arsenic and Old Lace.

Hieu Nguyen (‘17), first time IMSA play-goer, gave his thoughts on the set: “I was never aware of how much work some of my friends were putting into it when they simply said ‘we’re building the set.’“ Nguyen said, “on a day where I could have been cramming homework or applying to college, I had no regrets going to see this play — it was truly entertaining and impressed me. I will keep an eye out for the next production.”

Most thankfully, Arsenic and Old Lace did a splendid job of restoring my spirits.

Be the first to comment on "Arsenic and Old Lace: A Murder Worth Watching"