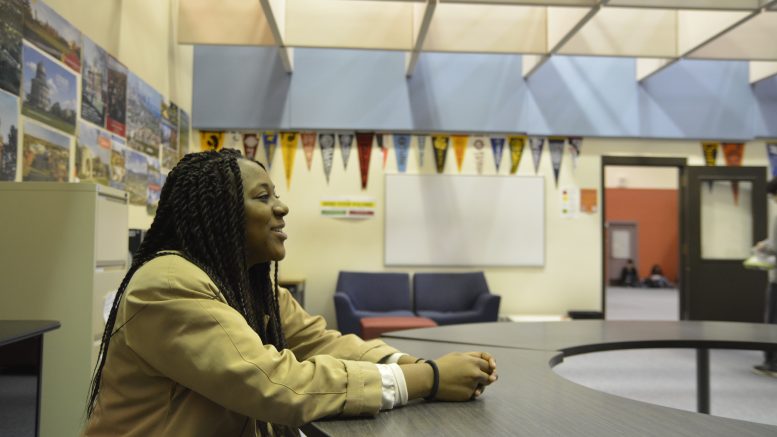 In light of recent events from the past week, the African American Student Association (AASA) hosted a community conversation on Thursday.

The room was silent, yet crowded, to say the least. Upwards of 50 students from all halls and classes quietly filled up the couches, chairs, tables, and floor. Regardless of their personal frustrations, each individual walked into the room with one objective: to walk out feeling a little bit better.

The board members began the discussion by asking students to describe their feelings in one word. Concerned. Scared. Frustrated. Confused. We just hoped the next hour or two could be a magical cure for it.

Members of AASA proceeded to ask the room for solutions moving forward. Students proposed a silent witness program for people who do not feel comfortable confronting microaggressions. In addressing diversity education, one student pointed out “residential programming doesn’t work.”

Some students nodded, and others simply listened. They expressed how the forced nature of such programs is not productive. It’s hard to connect to people if they are forced to be there. Students proposed we have more casual events. “We should have events where people just come and talk and hang out. Because if you have a conversation with someone, even if it’s about food, it makes it easier to empathize with them,” senior Akash Palani (’17) said.

Empathy. The theme found itself woven into every sentence from every mouth.

“Some people said they didn’t know anyone affected by this. Isn’t that a problem with who you’re friends with, and the fact you are not exposed to the community?” junior Rebecca Xun (’18) said. The group began to speak about the isolated communities in the academy, and how such isolation can be combated.

“Hanging around with a diverse group of friends will help you realize. You need to put yourself in other people’s perspectives to see the weight of your own words,” junior Clinton Oshipitan (’18) said.

“Social gatherings are supposed to build bonds,” senior Sam Okoli (’17) said. Okoli spoke to the necessity of intrinsically motivated friendships, rather than those forced through programming.

Another student mentioned the undeniable importance of educating ourselves in other peoples’ cultures. “Educate yourself so you can be more empathetic,” sophomore Jayda Yancey (’19) said, “take African-American studies classes. Go to AASA GAs.” AASA board members showed frustration at the number of events they have hosted with minimal turnout.

The president of AASA, Camryn Clanton (’17), asked the group why they felt conflicted and confused. People responded they supported the people involved but not their actions. They heard rumors of suspension, and did not agree with the punishments. They were confused on their personal freedom of speech based on IMSA’s guidelines.

Junior Sona Fokum (’18) said, “I was scared no one cared. I thought people were more afraid of canceling Clash instead of consoling the people they hurt.” Students expressed sadness that it took an event as drastic as this to have such a conversation.

A senior student mentioned the students involved in the posting of the photos. He pointed out the public humiliation, and resultant feeling of alienation. Okoli addressed his concerns. He said, “Alienation or vindication is not the answer at all. There is no ‘us’ or ‘them’. We’re all in one community and trying to make it better.” Junior Justin Elisterio (’18) said, “students with students. That helps the situation.”

The conversation then shifted to the role of administration. “We’re giving admin less credit than they deserve,” Sona Fokum (’18) said, “they’re trying to help the community.” Based on rumors they heard, some people believed Student Life was being unfair.

“This mistake shouldn’t be made again in fear of suspension or expulsion, but because you’ve affected other people,” sophomore student Devika Prasad (’19) said. Another student pointed out we should utilize education and understanding instead of punishment. They mentioned how people should be allowed to make mistakes, because they do not enter the community understanding everything about culture.

Sophomore Srivinay Tummarakota (’19) mentioned the assembly this past Tuesday. “It should have been less of incriminating every student on campus. Everyone was made to feel guilty, and that was not the feeling we were trying to evoke,” he said. Another student mentioned how people walked into the assembly with one perception, and walked out with the same perception. They wished somebody in the affected community would have spoken at the assembly to help the rest of the school understand.

Students moreover addressed issues of language and offense. One student addressed empathy in regards to student backgrounds. When people have spent their entire lives in one community, we cannot expect them to change their vernacular in a day, they said. Us, as community members, must hold them accountable.

One student mentioned their old communities, where they were taught certain vernacular was acceptable. Upon entrance into IMSA, they realized their language was bad, oppressive, and disrespectful. They took time, a lot of time, to learn. “Shouldn’t that approach be used more than a reactionary response?” one student responded. “You came here without knowing. When you learned, you stopped,” they said. They claimed such forgiveness should be applicable in the current situation.

The conversation diverged, and students attempted to draw a line at the point ignorant and offensive action was unforgivable. No conclusion was reached. The conversation was steered back to tangible solutions. Concepts such as reformative education, residential life programming, and the Big Sibling Committee were discussed for their role in diversity education.

“Diversity includes diversity of opinion,” senior Srivarun Tummarakota (’17) said. As conversation continued to flow and people trickled in and out of the room, we were grateful to be at a school that allows such intimate dialogue. It’s easy to forget we go to one of the most diverse high schools in the state, if not the nation. It’s time we stop brushing that off and setting boundaries for those we reach out to.

Take it as an opportunity. Not just the last week, but IMSA as a whole. Life at the academy is not only an opportunity to develop our personal empathy, but also break down barriers we never knew we had.

“There is something much simpler. Always try meeting a new person. Overcome shyness,” Okoli concludes, “don’t be afraid to step out and meet someone new and see a new perspective.”