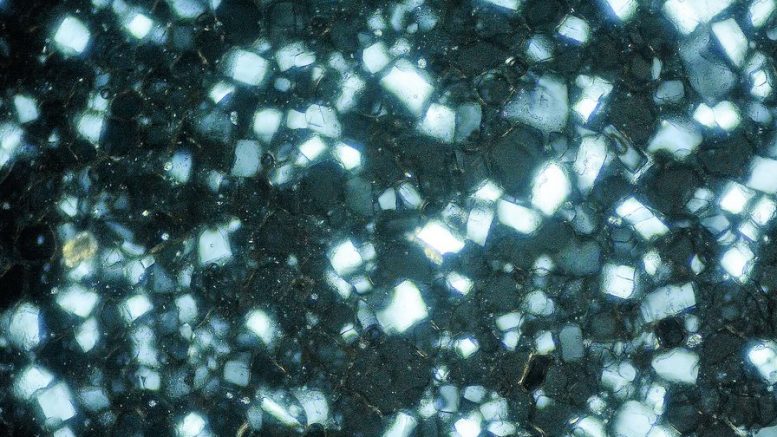 Ice cream crystals magnified; an image of a time crystal has yet to be rendered. (Ben Mills/ Wikipedia Commons)

From quartz to diamond, crystals are ubiquitous in society today. A typical crystal consists of atoms or molecules arranged in a repeating pattern in three-dimensional space, closely resembling a lattice. However, in 2012, theoretical physicist and Nobel laureate Frank Wilczek proposed the idea of a time crystal – one which, instead of repeating rows of atoms, would exhibit perpetual motion.

“Most research in physics is continuations of things that have gone before,” said Wilczek, a professor at the Massachusetts Institute of Technology. The idea of time crystals was “kind of outside the box.”

At first, Wilczek’s idea was met with considerable criticism, with detractors arguing that the existence of a time crystal would go against the laws of physics, as its atoms would remain in an infinite loop without extra energy. However, in a paper published in late January of 2017, Norman Yao and his associates at the University of California, Berkeley have revealed a blueprint to create a time crystal, in which Yao dictates, step-by-step, how to make and measure the properties of such a crystal.

Based on Yao’s blueprint, a team at the University of Maryland headed by Chris Monroe constructed a time crystal out of a sequence of ytterbium ions last September. Yao closely collaborated with Monroe’s group to make the crystal, stressing some specific properties of time crystals to confirm that the material was, in fact, a stable or rigid time crystal. Monroe’s group created a time crystal that employed a procession of 10 ytterbium ions whose electron spins interact, similar to the quantam bit (qubit) systems being tested as quantum computers. 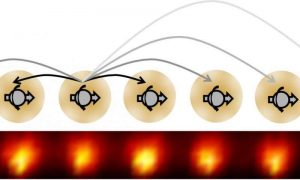 Each ytterbium ion behaves like an electron spin and displays long-range interactions indicated with arrows. (Chris Monroe/University of Maryland)

“Such similar results achieved in two wildly disparate systems underscore that time crystals are a broad new phase of matter, not simply a curiosity relegated to small or narrowly specific systems,” Phil Richerme of Indiana University wrote in a perspective piece which accompanied the paper published in Physical Review Letters. “Observation of the discrete time crystal… confirms that symmetry breaking can occur in essentially all natural realms, and clears the way to several new avenues of research.”

Another team at Harvard University created a time crystal by exploiting defects formed in diamond. Dr. Khemani, a renowned physicist and coauthor of a Harvard paper on the topic, agrees on the significance of the experiments. She believes that “these phases are a novel example of spatiotemporally ordered systems which certainly represents a new shift in our understanding of possible quantum orders.”

In a news release, Yao called it “a new phase of matter, period.”

Scientists parallel the behavior of time crystals with that of Jell-O. When flicked, Jell-O jiggles. Similarly, the time crystals jiggle, but without any expenditure of energy.

“Wouldn’t it be super weird if you jiggled the Jell-O and found that somehow it responded at a different period?” said Yao. “But that is the essence of the time crystal. You have some periodic driver that has a period T, but the system somehow synchronizes so that you observe the system oscillating with a period that is larger than T.”

While the time crystals do not expend any energy and yet are constantly moving, their infinite motion cannot be harnessed as a potential energy source. As Yao states, “It would never be possible to extract energy from this motion – that would violate the conservation of energy.”

Nevertheless, the creation of time crystals opens a new world of possibilities for physicists and allows further exploration of new forms of matter unimaginable to the human mind. It creates a new perspective of the world around us; in fact, time crystals might have enormous implications for building stable qubits for quantum computing.

Chetan Nayak at Microsoft Station Q, says that research regarding time crystals “could help us better understand quantum properties and solve the problem of quantum memory associated with quantum computing,” as quantum computers rely on maintaining a state of entanglement among qubits to store information, a state of entanglement that could remain permanent due to the infinitesimal motion of the time crystals.

Now, time crystals are more than just an abstraction – they can be created and used to better the living world.