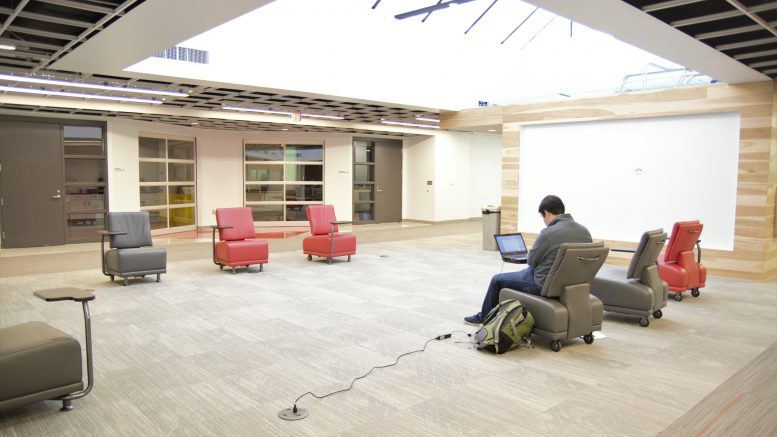 With the start of 2017, the walls blocking the Math Study area and the upstairs chemistry labs finally came down, revealing not only modernized chemistry laboratories, but also a sleek, comfortable, and naturally-lit new commons area. After a few Facebook polls, a majority of students have chosen The Loft as its title, but other contenders include the Greenhouse, the Lounge, the Sin Shack, and the Chemical Compound.

But how did it all come to be? “We’ve actually wanted to renovate for a decade now. The old chemistry labs made us feel as if we were teaching in the 1970s…I even had a small, dark closet as my office,” Dr. DeVol, science teacher and Operational Coordinator said, “Then, after receiving money from the state, we began the project about three to four years ago. I went to a conference on building student learning spaces, and all the teachers talked about what we wanted.”

Dr. DeVol continued to speak about the vision for the new space: “We wanted a place for student collaboration. Something with more light, more of an open, modern feel, and definitely students-centered.” This vision then went to the architects, who worked with him for a year before the construction crew began their work in February 2016.

Now, we students can enjoy the fruits of that labor. The Loft includes polished tables (near the newly painted staircase opposite administration offices), an open space with movable soft chairs, a small alcove with a white board and a table, and finally, a desk area against the wall. Complete with a skylight to let in natural light and charging outlets, it has everything a student could want. Students are definitely enjoying the space; one anonymous junior even observed, “Students are staying longer at main campus. Heck, even I want to stay longer; it’s such an amazing space!” What more could students ask for?

It turns out that IMSA has even more surprises for the student body. Dr. DeVol explained future plans, now that this project has been successfully finished. “Starting this June to the fall, we’ll be renovating the B wing area, such as the current MCB/MAD and Organic Chemistry classrooms. The area will be open for students come second semester.”

Be the first to comment on "What is The Loft?"