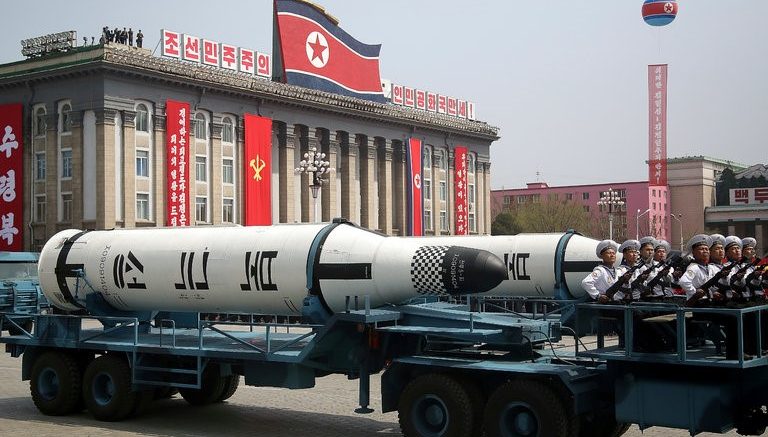 The Pukguksong-1, North Korea’s first submarine-launched ballistic missile, was among the array of weapons displayed on Saturday in Pyongyang. (Wong Maye-E/ Associated Press)

To mark the 105th anniversary of its founding father, Kim Il Sung, North Korea hosted a massive parade on Saturday to flaunt its collection of new missiles and launchers.

The canisters, North Korea’s largest yet, could potentially hold ICBMs that can target mainland US and Europe. Other missiles in the parade are meant to be a threat to countries in North Korea’s vicinity.

However, Melissa Hanham, a senior research associate at the James Martin Center for Nonproliferation Studies in California, says that the ICBMs are “both probably design concepts as we’ve never seen them in the wild.”

“We don’t know what — if anything — was inside the canisters since North Korea hasn’t publicly shown off or tested any missile of that size before,” says analyst Ankit Panda, agreeing with Hanhem. “We can infer given the size of the canister and the fact that it was paraded on Saturday that Pyongyang wants the world to know that it is actively working toward at least two types of solid-fuel, canisterized ICBMs.”

Canisterized ICBMS can be deployed with greater speed. And as compared to their liquid-fueled counterparts, solid-fuel ICBMs could also be better hidden from satellite detection.

“It certainly appears to be a message to the United States that they’re capable of threatening the US homeland,” said Adam Mount, senior fellow at the Center for American Progress. “That’s certainly their objective.”

The parade also included tanks, multiple rocket launchers, and artillery guns, as well as a powerful midrange missile that outside analysts call “Musudan,” with the potential to target U.S. bases in Guam.

Some argue that North Korea’s display may be a response to rising tensions with the U.S., as the U.S. Navy recently dispatched an armada of ships into waters near the Korean peninsula amid fears of another round of nuclear tests.

“The ships were sent out to make a statement,” says Hanham. “North Korea responded by showing off the newest missile hardware we’ve ever seen in a parade before.”

And indeed, Choe Ryong Hae, regarded as the second-most powerful official in North Korea, said Saturday that the U.S. government was establishing a hostile situation by dispatching military assets to the Korean Peninsula.

Nevertheless, analysts warn against overreaction despite the displays on Saturday, pointing to the unreliable record of success that North Korea’s missile program has experienced and adding that a missile in a parade does not necessarily mean imply functionality.