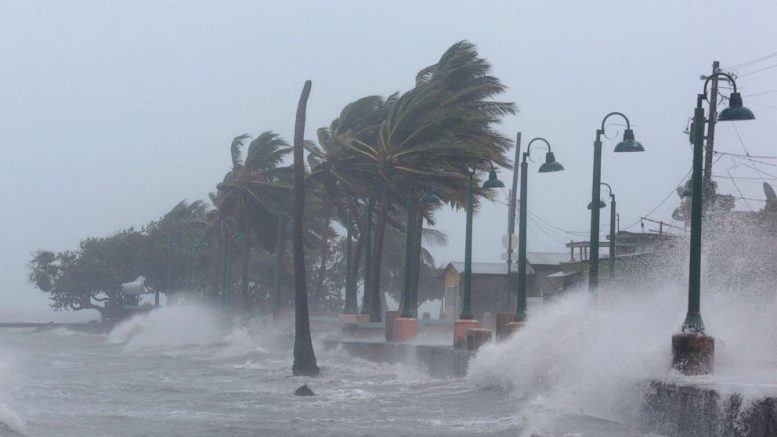 Waves crash against the seawall as Hurricane Irma ravages across Florida. (Alvin Baez/Reuters)

Hurricane Irma ravaged across southwest Florida on September 10, downing power lines and leaving a trail of debris in its wake.

Tampa residents, after frantic preparations, braced for Irma’s arrival. The storm was weaker than expected but still boasted winds of about 100 miles per hour, now as a Category 2 hurricane, downgraded from its former Category 5 rating.

Andrew Mckaughan, a meteorologist at the National Weather Service in Tampa, stated, “The counterclockwise rotation of Irma’s wind pushed water out of the Tampa bay, but after the center of the storm passes Tampa, the direction of the winds will reverse and push water back into the bay, adding to the flooding.”

More than 3 million people lost power due to Hurricane Irma, with residents relying on the remaining battery of their cellphones to keep them in touch with the world. Utility officials said it will take weeks to restore electricity to all residents.

Irma first touched land in the Florida Keys, and then made landfall in the state again when it reached Marco Island. The storm’s impact was so widespread that areas that didn’t face a direct hit still faced flooding and downed power lines. However, Irma’s powerful winds are the least of the people’s worries; the storm surges that threaten Florida’s coastal cities are expected to be more catastrophic.

“The threat of catastrophic storm surge flooding is highest along the southwest coast of Florida, where 10 to 15 feet of inundation above ground level is expected,” said the National Hurricane Center, in a statement. “This is a life-threatening situation.”

Mass evacuations jammed highways heading north and resulted in a severe gas shortage in parts of Florida in anticipation of Irma. However, not all Floridians evacuated; some decided to stay rather than evacuate.

Naples resident Gina Fischer said, “We didn’t know if we’d have an opportunity to even get gas.” Rather than run away from danger, Fischer instead boarded up the windows of her north Naples home, leaving a message for the impending storm: “Irma, go away!”

Florida Governor Rick Scott said Irma’s wrath is unprecedented, and warned that it might be hard to “survive these storm surges.”

However, President Donald Trump called the US a “little bit lucky” after Irma started to head west along Florida’s coast from its original course into central Florida. Trump also said in a statement how Irma will cost “a lot of money;” however, that was not his main concern as he also stated, “Right now, we’re worried about lives, not cost.”

As the storm ravaged through Miami, waist-deep water surged through streets at least three blocks from the shore. Joseph Zahralban, Miami’s deputy fire chief, said, “The weather has deteriorated to the point where we’re not comfortable even sending anybody out to even evaluate the situation. So, our only concern right now is the protection of life, not property.”

Members of the IMSA community have relatives down in Florida, for whom they are worried. Fine arts teacher Mrs. Joyce Symoniak has a daughter who evacuated her home but remained in the state; the two call each other everyday for updates on the situation, but must keep conversations brief in order to conserve battery power.

As Irma continues on its way, only time will tell if prayers are answered.

Be the first to comment on "Hurricane Irma Ravages Across Florida"