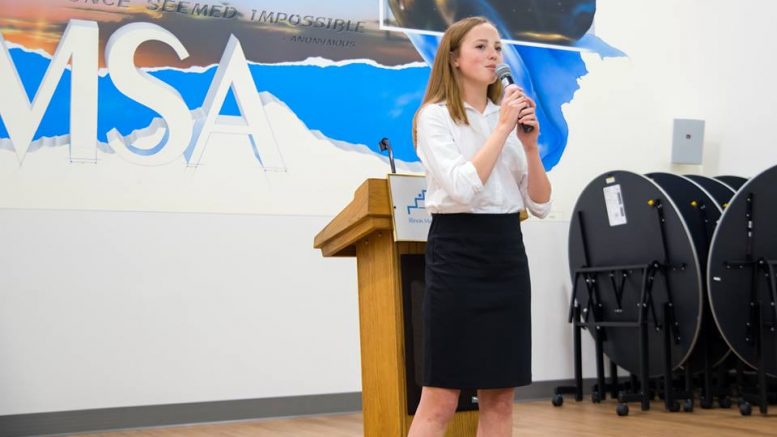 Sophia Pribus, one of the new Sophomores-at-Large, speaks to the Class of 2020. Photo by ISP.

On October 4th, the IMSA Student Council hosted Sophomore-at-Large elections in Sodexo, where candidates gave speeches to their classmates in hopes of their vote.

All Sophomore-at-Large applicants underwent a rigorous process, including a written application with essay questions, optional Open Houses for motivated candidates, an interview with current StudCo members, and finally a simulated cabinet meeting. Student Council only elects two Sophomores-at-Large each year.

Candidate Sabrina Meng described the process: “The simulation included a hypothetical problem…  We could ask other students for their input on a given solution…or compose our own solutions.  In the end, we condensed it into a seven-minute-long presentation.  I learned to use my classmates’ input to make a solution that fit everybody the best.”

Another candidate, Ray Shang (‘20), stated, “The process was a valuable opportunity regardless of the election outcome.  The expectations, the rigorous tasks, and the types of questions asked all culminated into a concrete experience of learning how to articulate my ideas effectively.”

Each nominee gave a three- to four-minute speech on the new stage in Sodexo.  The five candidates for Sophomore-at-Large were Ray Shang, Peter Baffoe, Sophia Pribus, Sabrina Meng, and Ishaar Ganesan.

Candidates focused on various topics throughout their speeches: from the lack of an ATM machine in IMSA (Shang), to introducing an extracurricular leadership shadowing program for sophomores (Baffoe), to the conflicts caused by various clubs’ meeting schedules (Pribus).  Other issues covered included the lack of fun activities for sophomores on I-Days (Meng) and distributing study hour time in free mods throughout the day (Ganesan).

Sophomores were dismissed by hall to cast their votes in the election.  Results were posted that night: although all five candidates had strong speeches and had been filtered through the rigorous application process, Ray Shang and Sophia Pribus won the title of Sophomore-at-Large.

The sophomores are excited to have an official voice and vote in Student Council, and look forward to see what the new Sophomores-at-Large will accomplish during their year in office.

Be the first to comment on "Sophomore-at-Large Elections: A Ray of Light and Soph-for-Soph"