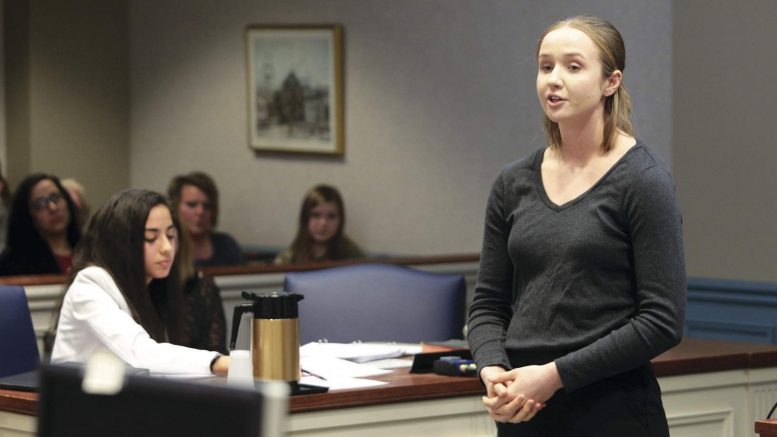 On trial for her crimes. (Source: New Jersey Herald)

AURORA, IL – As she stood before a jam-packed Aurora courthouse last Tuesday, senior IMSA student Gretchen Wiener stood strong as the Senior Council read a litany of charges against her, including (but not limited to) reading a chapter ahead in history, getting a good night’s sleep, and nodding a little too enthusiastically when her English teacher announced a pop quiz. After a brief commotion in the courtroom, Ms. Wiener made her beliefs perfectly clear: “You guys! I just want to, like, get ahead in life!”

Members of the jury, however, remained unconvinced. For one, Ms. Wiener had already been accepted to attend several Ivy League schools, casting doubts over the necessity of her purported self-improvement. More damning evidence could be found in her membership of the Association of SSSers, an organization that require its participants to “Do Nothing, Think of Nothing, and Do Nothing” for the remainder of their high school careers. Clearly, she was in violation of the contract.

With the cards stacked against Ms. Wiener, it took all of five minutes for the courtroom to come to a unanimous decision.

“Gretchen, stop being a tryhard.”