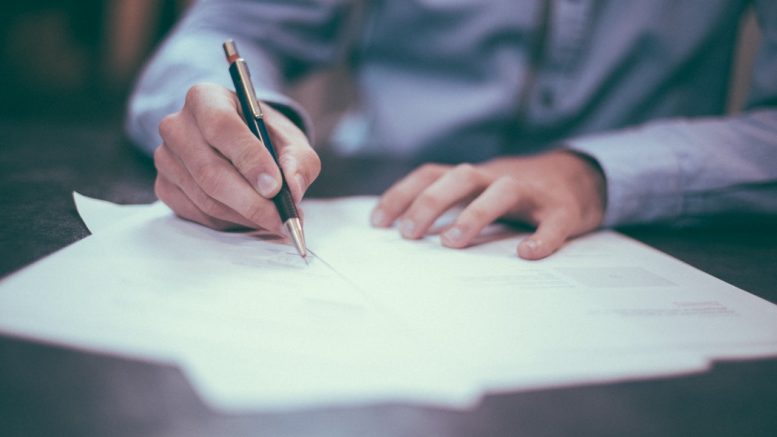 The IMSA selection process has changed over the years. (Source: Unsplash)

IMSA students often wrangle with such fundamental questions as “How did I get into this school?” and “Why am I even here?” But rarely do these questions get a serious answer. What goes on inside IMSA before they send out those 700+ acceptance, waitpool, or rejection letters? How does IMSA admissions really work?

When IMSA was founded two decades ago, it adopted a competitive admissions process to ensure that it truly served Illinois’ “best and brightest.” The process was carefully constructed to avoid strictly test-based admissions, as IMSA “has never believed that admissions based solely on a ‘competitive examination’ was fair or appropriate,” according to a slideshow tracing the history of the IMSA admissions policy. Rather, IMSA sought to teach high-schoolers with known traits of gifted and talented students.

Since IMSA’s chartering, the state of Illinois has done multiple audits on IMSA admissions. The first of these was published in 1999, thirteen years after IMSA’s founding. As stated in this audit, historically IMSA admissions worked as follows:

In 1998, admissions was based on three equally weighted factors:

These three scores were summed to produce a Total Composite Score, or TCS, for each applicant.

First Half of the Class

The students with the top TCSes were automatically accepted to comprise the first half of IMSA’s admitted class.  For example, if IMSA aimed to admit 250 applicants one year, then the top 125 TCSes would be accepted as the first half of the class.

These goals were calculated as a percentage of each demographic in the applicant pool compared to the admitted class. For example, if 74% of applicants were from the Chicagoland area one year, and IMSA admits 250 students each year, then IMSA would aim to admit 0.74 x 250 = 185 students from Chicagoland that year.

Second Half of the Class

The Selection Committee determined the waitpool at the very end of the admissions process.  In 1998, 40-50 students were placed in the waitpool, and half of those students were eventually accepted (when an originally-accepted student chose not to attend).

The 1998 audit includes data tables that show how well IMSA fulfilled its admissions goal: to approximate the applicant pool demographics. In the graph below, it appears that most groups are “adequately represented” by IMSA’s definition of the term, as the percentages appear relatively equal between the applicant and admitted pools. 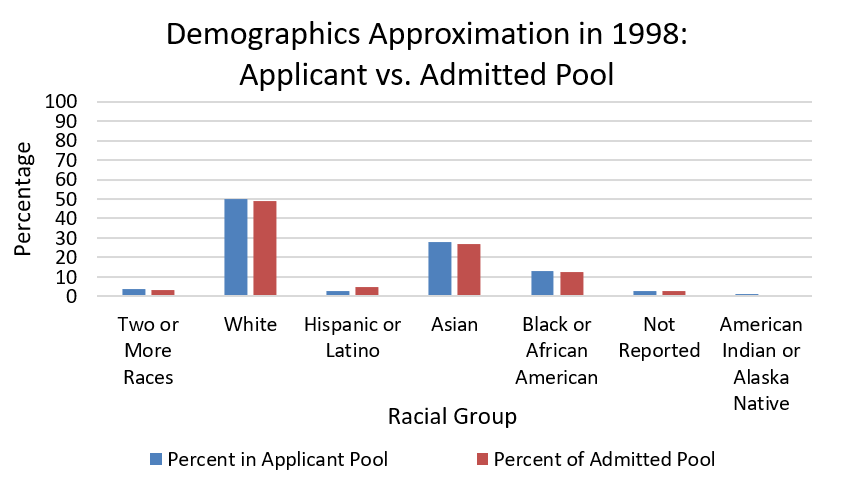 Percentages of each racial group in the 1998 applicant pool versus admitted pool. Data obtained from the State of Illinois, IMSA Program and Management Audit, November 1999. Created by Grace Yue. 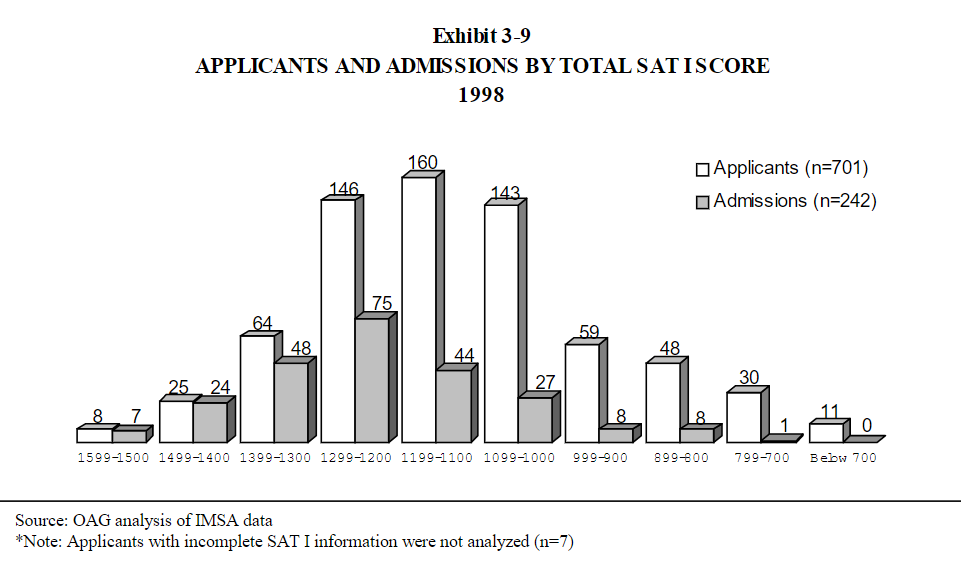 The SAT was scored out of 2400 points (800 points each for Reading, Writing, and Math).  However, the Writing section was disregarded in the admissions process, so the total scores shown in the graph are the sum of each applicant’s SAT Math and SAT Reading section scores. 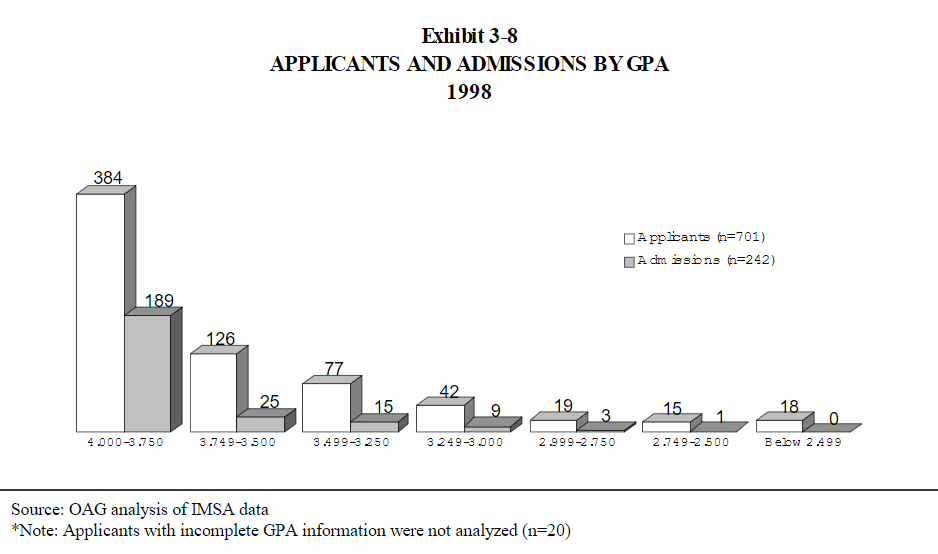 According to Ms. Kelly Lofgren, IMSA’s Director of Admissions, Review Committee members “represent a diverse group of educators, community leaders, business professionals, industry experts, IMSA alumni, and IMSA faculty and staff.”  All members undergo training to introduce them to IMSA’s mission and the kind of students the school teaches.

As in 1998, the Review Committee is divided into teams of 3-4, usually with at least one IMSA staff member on each team to provide expertise.

The Review Committee still does not see the applicant’s SAT scores or GPA, scoring students based solely on their application essays, teacher evaluations, extracurricular activities, and awards.  They use a rubric to score each student in several dimensions.  While “the specifics of the process are confidential,” Ms. Lofgren described the rubric as containing “various characteristics that we believe are important to success at IMSA.”

As stated on the IMSA website, the purpose of the Review Committee is to “evaluate students’ accomplishments, interests, and motivation independently of grades and test scores.”

Applicants are still scored on a scale of 20 to 80, and the average RCE score for admitted applicants is approximately 65.

The Selection Committee receives each applicant’s file, complete with SAT scores, GPA, and Review Committee Evaluation score. However, they do not calculate Total Composite Scores as they did in 1998 – the TCS was eliminated from the admissions policy in 2006.

Also, unlike in 1998, there are no longer two halves of admissions (the first half admitted on TCS and the second half via a holistic review).  Rather, the Selection Committee chooses the entire class via a holistic process.

The Selection Committee eliminates all incomplete or unqualified (ex. did not complete high school science, did not take Algebra I, etc.) applications from the pool.  They then sort the remaining applications into two piles – “admit” or “deny” – based on how they think the applicant would succeed at IMSA.

Narrowing the Admitted Pool to Create the Waitpool

However, if an applicant was sorted into the “admit” pile initially, they must either be accepted or waitpooled – never rejected altogether.

With its holistic process, IMSA maintains “adequate representation” as defined in its admissions policy: “approximating the diversity of the applicant pool from among eligible applicants.” As in 1998, the racial groups are very well-represented, as one can see in the following graph.  The only notable exception is that whites are over-represented by 8.9% in the admitted pool. 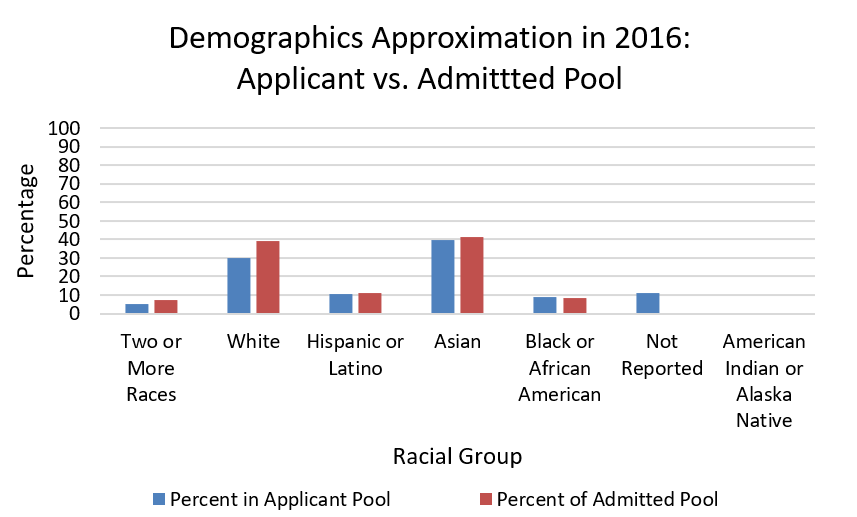 However, an important distinction to make is that while IMSA seeks to approximate the demographics of the applicant pool (effectively limiting the number of applicants who are admitted from any given demographic), IMSA does not aim to fill any racial quotas. 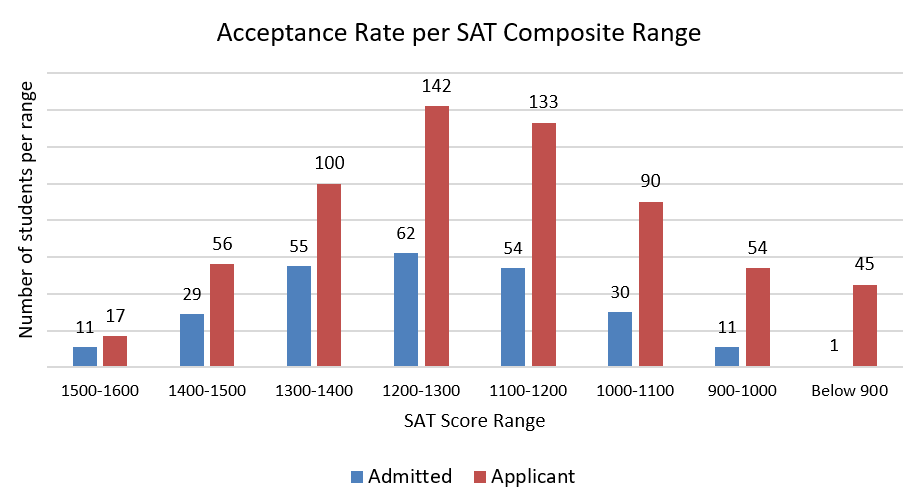 Admissions rates for applicants per SAT score range in 2016. Data obtained via FOIA request in June 2017. Developed by Grace Yue.

The timeline below summarizes the changes made in the admissions policy from IMSA’s founding to the present. 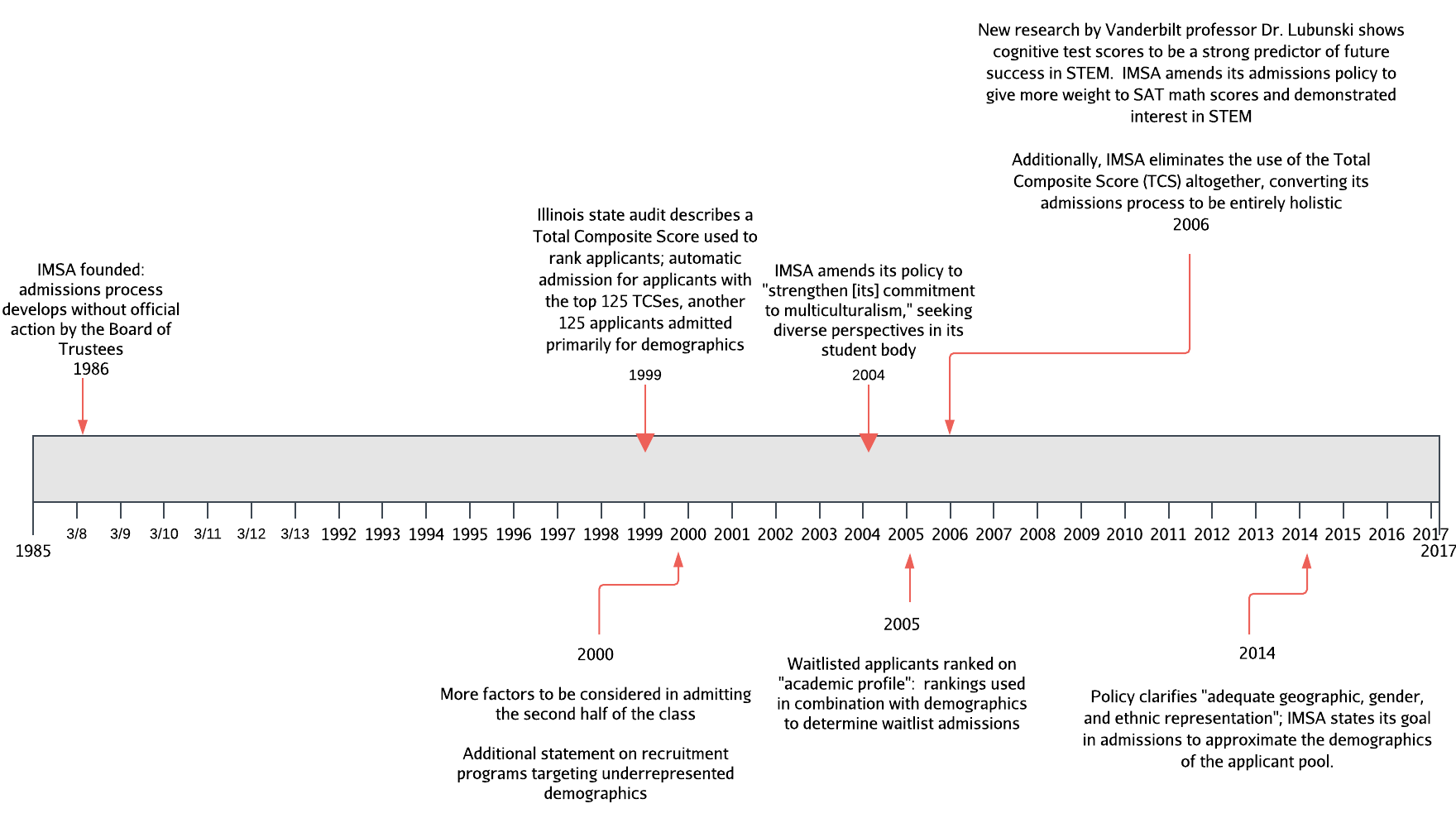 IMSA uses competitive admissions to compare applicants on a variety of factors, including SAT, GPA, essays, involvement in extracurricular activities, and demographics and other extraneous factors, in order to ensure a diverse class each year.  While the specifics of the process have changed over the years (from being one-half holistic to being wholly holistic), the overall process still serves the same purpose as it did at IMSA’s founding: to choose applicants who are most likely to succeed in IMSA’s unique, rigorous academic and residential environment.

Special thanks to Ms. Kelly Lofgren and Dr. Eric Hawker for their thoughtful insights and perspectives.

IMSA Demographics by the Numbers