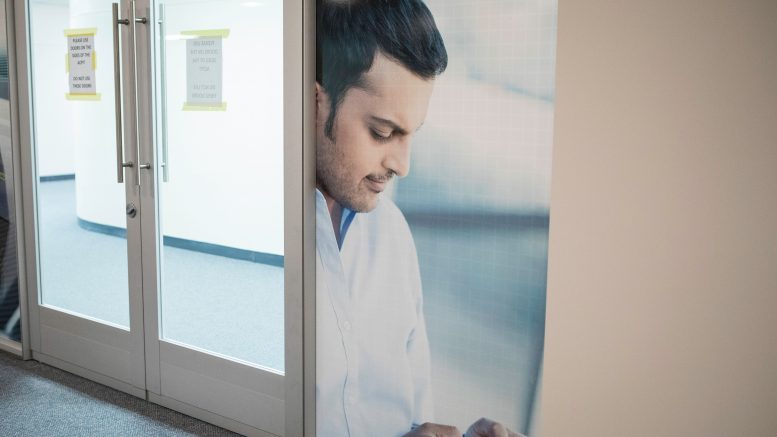 Here is the object of intrigue. (Source: Kevin Broy/ISP)

AURORA, IL – This past Wednesday, the entire IMSA English department was seen huddled around the new glass doors of the AC Pit at approximately 12:43 PM. A frightened student reported that they stood there for almost half an hour, talking suspiciously in hushed voices among themselves.

“They were really scary,” says Innocent Soph (’20). “I have no idea what they were looking at or doing, but they seemed really frustrated or offended by something. It’s almost as though the glass doors were a walking, talking representation of Clash drama, or something equally horrible.”

Such a gathering is especially odd, even though the faculty are famous for their weekly lunches in their department office. What could possibly have induced them to abandon their time-old tradition?

“I guess they decided to replace family lunches with cult gatherings,” commented Well-Seasoned Senior (’18). “But honestly, I think they’re cute either way.”

Representatives of the English Department declined to comment, despite an abundance of unconfirmed rumors. Students said that only two days previously, the esteemed Dr. Hancock was heard yelling, “I want you to go over there and tear those damn things off the door!” to his Creative Writing Workshop class.

“He also screamed something like ‘this abomination contradicts the new Equity and Excellence report!'” reports Sleep-Deprived Junior (’19). “And apparently he talked to Dr. Bob about his issues. But I don’t remember what exactly he was saying — see, I was trying to nap, at the time?”

So as of yet, the exact target of the English department’s anger can only be left up to speculation. However, we can be sure that our favorite teachers are up to something — the usually confident Dr. Very Nice was overheard expressing an element of intrigue during the Wednesday gathering.

“Do you think they’ll catch us now because our fingerprints are on them?” she whispered furtively, eyes darting around for potential witnesses.

The Inevitable Riot of Add/Drop