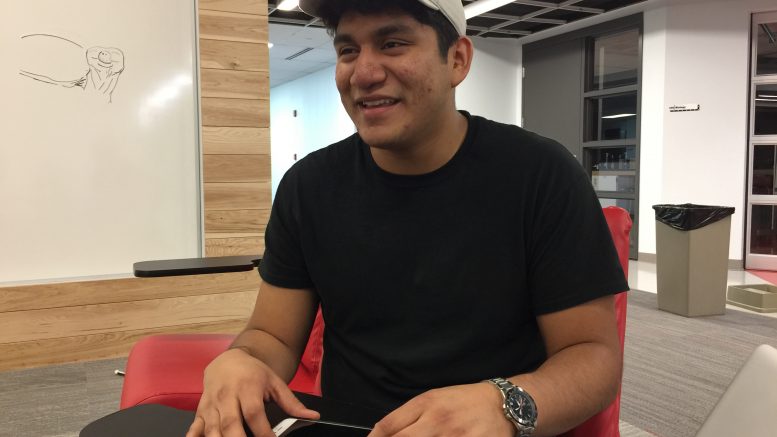 In our first apartment, all we had was a mattress, a cooler, and a small table. We didn’t have anything else. I could remember when I was a little kid, there were a bunch of pictures of me inside the cooler. My mom would say that I acted like it was a car, because it was my dream to ride in a car. Eventually it became a necessity to have a car, because my dad started working in Aurora and we live in Cicero.  He ended up paying 800 dollars over the year for a car, and this was the worst and the best car in the world.

It didn’t even have a full floor under the passenger seat anymore; it had a mat with duct tape holding it together and a hanger holding the hatch. One of the doors was held by bungee cords. It was a shitty car, but my 2-year-old dream had come true. We had a car. My dad and mom obviously went through tough times, but they always found joy.  They would say, “We have the fastest car in the streets,” and I would always have the time of my life knowing that. I would always tell my dad to activate the turbo boost, and he would accelerate.

In my perspective, life was awesome. At the time we may not have had the greatest living situation but that didn’t stop me from having fun. My parents were always real with us. For example, when I asked for food in the grocery store, [they would tell me] “I’m sorry, we don’t have the money. Make sure to ask next time.” My imagination always kept me distracted, and it was a great way for me to escape from my reality. My imagination filled the world with beautiful sights, clouded bad images, and allowed me to have an optimistic attitude from day one. When my parents were upset, my optimism and happiness brightened their moods. I’ve always shared my happiness.

“What was the hardest part about coming to IMSA?”

At IMSA, I think the hardest thing definitely is being away from my family, they are all I have ever known. Leaving them was tough, they provided me with a great sense of motivation and security. I remember getting so excited to go back home on weekends and feeling really anxious to come back. On Sundays during sophomore year, pulling up to Sullivan Road was a heart wrenching and stomach dropping experience. I struggled a lot, the first four months of IMSA. I didn’t feel like I had any friends. I was away from my family, and I wasn’t doing well in school. I would think I don’t want to be here.

One thing that shocked me was that IMSA really does fool you. In my old school, it was black and African American and Latinx students, and when I came here, I was convinced that everyone is going to be the same, too. I came to SEAMS and EIP and there were a lot of black, African American, and Latinx students in these programs. But when I came to IMSA, we were the smallest population and I thought what was going on? I was also shocked at how people were so into themselves and how little consideration everyone had for others. It was shocking to see someone trying to sweep and mop for the first time. I realized that some people lacked compassion and life skills.

My family is my greatest motivator. I have such a great appreciation for them and all the sacrifices they made. My love for them always motivates me. What keeps me happy 25/8 is practice; it takes practice to be happy. Being in a down mood can be so easy, and it is natural to think of the negative things going on in your life. At the end of the day, it is always so easy to focus on the negative parts of your day, but is so unnatural to focus on the good parts. If you want to be happy 25/8, think about the mundane moments of life that can fill your days with happiness.

Here’s an example: I have a tiny, sassy little shih tzu. My dog is wonderful and quirky. I imagine him walking in the most bougie walk ever, and I think isn’t he just so cute? The little hop in his step just makes me laugh, it makes me so happy that I can forget everything and simply focus on my dogs cute bougie walk. Now take that feeling and apply it to the rest of day. Little things can make you happy for the whole day. I live off of these mundane moments. I pair it with lots of self reflection to appreciate the good things in life, and this takes a lot of discipline.

“How was school life before IMSA?”

In middle school, I started to become exposed to the realities of my environment. I started seeing my friends get into drugs, and we were 11-12 years old. Kids were having sex. And I started to understand what it means to have divorced parents, or parents who are in gangs. I had friends all over. I had friends that were bright and friends that were not so bright, and I realized the duality of humans. Not-so-bright people have such great life skills, and bright people have terrible life skills, and having both of them made me a well-balanced person. It’s crazy to think that in middle school, I would see violence within people’s homes.

In my own home, my parents never hit me, and we were fortunate enough to have a stable relationship and lines of communication. None of us really yelled at each other. Sometimes we would have arguments, but that is part of being a family. My parents were very tame and reasonable people. When I was 12, I was so shocked when I went to my friend’s house after football practice. It was the first time I saw a dad smoke inside the house. It was crazy. I was in shock and apparently his dad had a huge talk with my friend.

“What moment in your life has changed you entirely?”

A turning point in my life was when I first lost my friend when I was 15. It was during my sophomore year and he was on the football team with me during freshman year. I saw him all the time after school at practices and games. He got shot. This was real. Somebody that I interacted with everyday was gone. And that was the reality: you lose people. Life is expendable, you can just lose it at any moment. I’ve experienced some interesting things from all of my different friends. I’ve seen their life situations and had a visual representation of an in-depth experience of what it was like to struggle in life, but it had never really hit me that life is hard. When I lost somebody for the first time, I saw life’s hard, and I’ve just been ignoring it. After that, my life changed. I had a revelation that led me to being happy 25/8. I’m no longer tired, I don’t have time to be sad.

After DACA was rescinded, Diego wrote about his primary motivations in advocating for his cause. Read more here: https://docs.google.com/document/d/18RohY3oc-2CCTKT7okpXzAhOyDxfF9kISgHpDEErJQk/edit

To honor his lost friend, Daniel Garcia, you can learn more here: http://www.chicagotribune.com/suburbs/aurora-beacon-news/crime/ct-abn-garcia-murder-st-0923-20150922-story.html

Aurora Harkleroad lives in 1501 and hails from Rockford. She is the Director of Humans of IMSA on the Acronym and writes comics in her free time.

Be the first to comment on "Happiness is the Best Medicine: Diego Alanis"