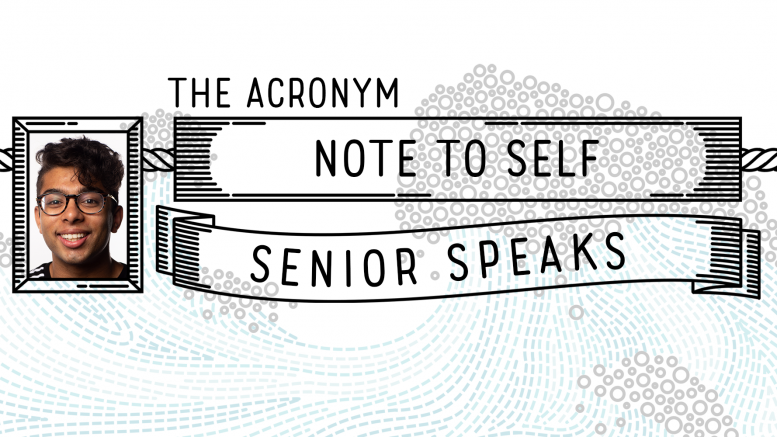 One of the sections included in the annual Senior Edition is a series of essays titled Seniors Speak. These works are written and submitted to The Acronym by members of the graduating class, allowing them to reflect on their experiences, share advice, and advocate for change. The writer of this piece is Patrick Pynadath (Northwestern ’22) and is kind of a beast.

You probably went to sleep at 4 a.m last night. Your desk is probably littered with empty Mio bottles, your bed is probably still made because you passed out before you could crawl inside, and your phone is probably dead because you forgot to plug it in. You feel like a mess, and you don’t know what to do.

If I remember your mentality correctly, you believe that IMSA is a dying institution with no hope of success beyond your year. You can’t stand your classes anymore. You detest every single club meeting you force yourself to attend. You feel trapped by the decaying carcass of a dying institution.

I’m talking to you from a perspective of someone who is nearing the end of his IMSA career and looking back on everything retrospectively. Patrick, you weren’t the first and won’t be the last to stake the claim that IMSA is a dying school. We both have heard every class give the same spiel: “IMSA’s gone,” “IMSA’s getting so much worse,” “Our class is the last good class.” But if something has been said to be dying for as long as people have said IMSA is dying, one has to ask whether the institution is actually dying.

You want to believe that the institution is dying because the harsh truth is that, as a student, you’re too stressed, sleep-deprived, and malnourished to take advantage of the opportunities that IMSA offers.

Why believe your apathy towards your classes is a result from the constant psychosis of sleep deprivation when you can blame it on the lack of curriculum development, which is “beyond” your control?

Why blame your apathy towards the clubs you’re in based on the fact that you joined more clubs than you could possibly handle in an attempt to be “college ready” when you can throw around the excuse of faulty leadership within the clubs?

The truth is, Patrick, it is much easier to use the excuse that “IMSA is dying” rather than actually looking at the root of the problem. When you argue that IMSA is dying, you’re shifting the blame from yourself onto an abstract concept that can’t do anything about the problems you face. You’re giving up hope when the solutions are within your control.

First off, why do you do things that you don’t care about? Being able to be passionate about something is beautiful. After all, it was a conversation about building computers in a dorm with one of the seniors giving the classic IMSA tour that finally convinced you to attend IMSA. But once apathy crept in and you lost the energy to care, the passion that once made IMSA a great place turned it into a cesspool of stress you found yourself drowning in.

This isn’t news: you’ve known that IMSA students load up on clubs that they can’t possibly sustain ever since you read Kevin Zhang’s Seniors Speak from 2013 at the beginning of junior year. You swore to yourself you wouldn’t drive yourself into a wall by taking on things you didn’t care about, yet you proceeded to do exactly that for the next two years, where you spent every Thursday meeting praying that LEAD looked good on a resume.

There isn’t any actual benefit to doing so many extracurricular activities – there are plenty of people who have gotten into amazing schools without being in 20 different clubs. Patrick, do you actually believe that one tiny fifty-character addition to the list of activities on Common App is going to get you into Harvard, or that one additional blurb on your resume is going to get you into Yale? Being passionate about what you do and investing your time into a few quality activities will show your passion and dedication more clearly.

Beyond college, spreading yourself too thin prevents any significant progress from being made in the extracurricular you do care about. Honestly Patrick, do you think any of the work you’ve done for the clubs you’ve been involved in have been good? You barely muster enough energy to show up to the meetings, but that’s it – past passing out at the meetings, you don’t do anything for the clubs you’re in. Drop what you don’t care about and focus on what you enjoy – the answer is as simple as that.

Secondly, while a high GPA along with a padded resume does look good, taking care of yourself feels much better. When you brag to your quad about how much caffeine you have in your system, you’re giving in to the martyr-culture that creates a competition between students to prove who has it worse. If you don’t care for yourself, then what makes you think you’ll be able to care about a club or a class? If someone brags about how they got 3 hours of sleep, why is your first response to show off the bags underneath their eyes to show how little sleep they got? Patrick, why do you feel the need to parade around your lack of self-care?

When someone brags about not eating a meal, don’t try and one up them: go to a vending machine and buy them a bag of chips. If you hear a wing mate bragging about how much caffeine they’ve taken, don’t give in to the martyr-mentality that plagues IMSA. Rather than trying to compete with people for pity points, make a legitimate effort to help them out. Patrick, have you ever stopped to think that the reason you think the IMSA community is dying is because the only thing you talk about to your friends is how stressed, tired, or hungry you are? Get out of your room, talk to people, and actually try to be part of the community before you go around claiming that the IMSA community is dying.

Beyond that, if you have to choose between staying up till four in the morning to finish homework or getting some sleep, get some sleep – you’re far more important than any BC1 take-home. And to be completely honest, if you stopped cramming your evening with activities you don’t care about, you would have more than enough time throughout the day to finish your homework and go to sleep early.

Patrick, let’s face it. You’ve made mistakes. But you don’t have to continue making them. IMSA was never dying: it was you who became too sleep deprived, malnourished, and hopeless to do anything about the problems you face.

If you care about IMSA, about the community, or about yourself at the very least, please give this some consideration.

Be the first to comment on "Seniors Speak: Note to Self"