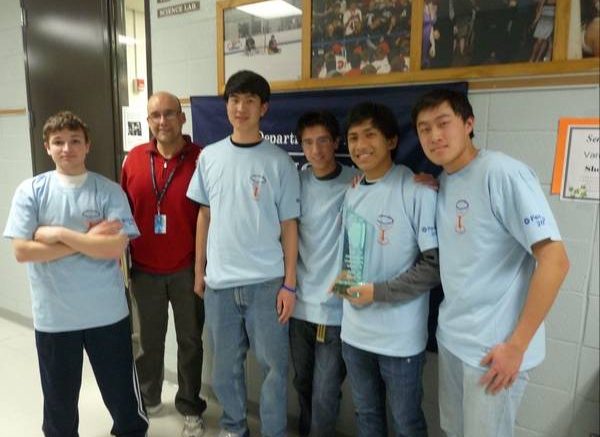 Dr. Clancy led the Science Bowl team to victory in the past. Source: Daily Herald

My Advanced Chemistry: Chemical Reactions class wasn’t what I had wanted it to be. The environment was toxic for reasons I won’t explain, and it resulted in me leaving class for about 10 minutes daily to decompress. Noticing my frustration, Dr. Clancy allowed me that time to relax. He kept an eye on me when I thought I wouldn’t be able to succeed in the class. When everyone else was talking and laughing and I was trying to figure out the post-lab we’d been assigned, he’d sit down to answer all of my questions. That class was one of my most successful classes at IMSA because of his care and commitment to my success.

Dr. Peter Clancy has been a member of IMSA faculty for ten years, and within those ten years, he’s truly shaped hundreds of students. He’s been kind, helpful, and committed to this community in every possible way. From coaching Science Bowl to teaching chemistry and physics, he’s impacted the community in numerous ways. Even in sickness, Dr. Clancy attempted to continue working because he was so committed to his students and work.

Through tears today, IMSA students and alum have remembered and honored their beloved teacher. Several students have shared their thoughts about their time with Dr. Clancy:

“So Akash and I had Dr. Clancy for AdChem 1, and he would be teaching the whole class on the board and usually Akash and I wouldn’t pay attention. So after he was done teaching the class and we didn’t understand anything, we simply told him that we were utterly confused and he HAPPILY sat down with us and personally retaught us everything without even being mad that we didn’t pay attention.” –Sohil Reddy (‘19)

“You could clearly see he cared for his students in ways that many other teachers on campus might not. For instance, many teachers are like the “big faves” and such. There are teachers everyone likes and everyone hopes to have and pass through. I feel with Dr. Clancy, many people might not have had him, but he left his mark on you no matter what. Even if just for a passing comment or for the entire class, he made you smile, he always recognized you BY NAME, he never made you feel small or dumb. He listened; Dr. Clancy didn’t need to be huge or theatrical to show you what it meant to be a good person and a good teacher. I’m proud to have had him.” –Connor Elmore (‘18)

“Dr. Clancy was such a kind person. If you ever needed help, he was there to give it. I appreciate all that he’s done for me, he will be greatly missed.” –Vivian Hedican (‘21)

“Dr. Clancy was always smiling and a source of positive energy to his students. He was an amazing person and inspired the IMSA community in multiple ways. I will miss him very much!” –Urvi Awasthi (‘19)

“I had Clancy for an 8:10 Monday morning E&M double mod and I somehow didn’t hate that class. If that’s not a testament to him being a quality teacher, I don’t know what is.”  –Thomas Demastri (’18)

“Dr. Clancy was Science Bowl coach during my sophomore year and coming into IMSA, I was still very shy and haven’t [sic] broken out of my shell yet. He was so welcoming and when I felt intimidated by how fast the upperclassmen were answering, he was very encouraging. He also joked around with the team and overall, just made science bowl one of my fondest memories from IMSA” –Tim Pan (‘17)

“Dr. Clancy’s drive to make sure his students understood what he taught was the most apparent thing about his teaching style. One of the times I felt most confident at IMSA was when I finished my calc-based final and wished him a great summer—his help lead me to getting the grade I wanted in the class. I went into the modphys room for extra help with Adhav and was so grateful that Dr. Clancy was so willing to help his students. I got an 83 on the final and a B in the class—thanks to Dr. Clancy’s help.” –Larry Donahue (’18)

Below, I’ve included a letter from Hanson Hao (‘19), who was heavily influenced by Dr. Clancy as a student:

Dr. Clancy was my first physics teacher at IMSA. Although he officially taught me only my first semester here, we kept in touch for much longer after that. Not because he was the best lecturer, but more so because of how much he loved the material. He loved the courses that he taught—I still remember going into his office every so often for him to show me some cool phenomenon that we only brushed upon in class.

Above all, Dr. Clancy wanted his students to succeed—so much that he considered it his greatest achievement when his students were able to teach him. At each weekly meeting for my Independent Study with him earlier this year, he would start by asking me to show him something new and unknown that I encountered on my research. When I was able to fulfill his request, he would sit and listen more attentively than I did when in his Sound and Light class, nodding and smiling as I explained topics wholly unfamiliar to him. In his final email to me, he expressed how happy he’d been for me to become his teacher over the past two months. He also left me with some parting advice and hints for my project that advanced me further along. For a physics and chemistry teacher who had known almost nothing about graph theory just weeks prior, he had put so much brainpower into the problems of his students—the marks of a truly excellent researcher, problem-solver, and teacher.

I will sorely miss Dr. Clancy’s kind presence on the IMSA campus. But I would like to think that he is still here with us—in the physics and chemistry journals he contributed to and in the research of every student he had the privilege to mentor.

We loved Dr. Clancy and will continue to love him in memory.

IMSA’s counseling services are open for anyone who wants to discuss grieving with anyone who may need it. There will be a shuttle provided for students to the family services on Tuesday, November 20th, departing at 2pm (sign up is available in Student Life) and returning at 4:30pm. In addition, IMSA will hold a memorial service for him on campus on Monday, November 26th, at 4:30pm in the Academic Pit. Student Council will hold an event to send cards to his family at the end of the week.

On behalf of the Acronym and the IMSA student body, I extend my warmest condolences to the Clancy family and to the IMSA community. He will be deeply missed.

Be the first to comment on "Remembering the Life of Dr. Peter Clancy"