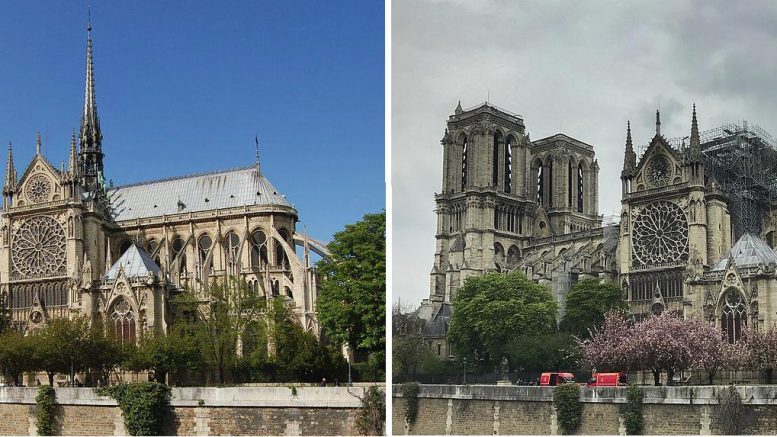 Notre Dame, before and after the fire. - Source: Wikimedia Commons

On Monday, April 22 at 6:50 PM local time, the Notre Dame Cathedral in Paris, France broke out into flames. An hour later, the iconic spire had collapsed and it seemed that the entire building might come down. However, after several more hours, Parisian firefighters managed to get the blaze under control. The spire and two-thirds of the roof were gone, but the main structure, including the iconic facade with its two towers, was saved. The fire was most likely an accident, and may have been linked to renovations going on at the time. No one was killed.

While the damage is tragic, it could have been much worse.  Most of the famous, historical artwork and other artifacts that were not lost in the damage. During the fire, firefighters rushed in and out to save these artifacts. One is the Crown of Thorns, reportedly the same crown of thorns that Jesus Christ is said to have worn at the crucifixion. Another example is of something a little less removable: the three 800-year-old rose windows, which are stunning examples of the beauty of stained glass. Astonishingly, the 180,000 bees that were housed in hives in the wooden roof are still alive with their hives intact.

As mourning for the damage and celebration for what was saved swept France, President Emmanuel Macron vowed to rebuild within five years. Paris mayor Anne Hidalgo hopes that the reconstruction can be finished by the 2024 Olympics, which will be hosted in Paris. Some estimates put the reconstruction time as high as twenty years, however. Regardless, it seems that at least funding won’t be an issue, as donations for the reconstruction have been pouring in, with the total already numbering over €850 million.

While it is a time to mourn, it’s also a time to be hopeful. Notre Dame still stands, and it will be rebuilt, whether it takes five years or twenty. The 800-year-old cathedral has gone through a lot in its time, and in the end, this incident will be just another blip in its great history.

Be the first to comment on "Notre Dame Still Stands"