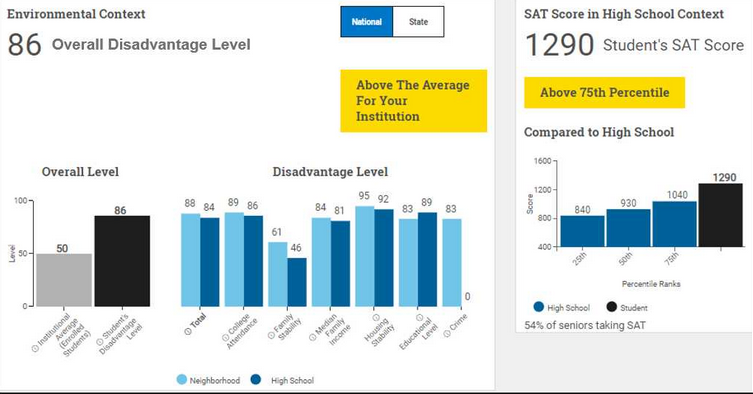 On May 16th, the College Board announced its plans to introduce a new score to be reported on SAT score reports –  an Overall Disadvantage Level score, which has been colloquially termed an “adversity score” by many news outlets. (The story was first published by the Wall Street Journal).

On a CBS interview, David Coleman, College Board CEO, stated that, “The SAT is a valid measure of your achievement – how ready are you for college? But it doesn’t measure…what you’ve overcome, the situation that you achieved that in. What we can do with this context data [the adversity score] is see how resourceful you are.”

Although this score will appear on official SAT score reports sent to colleges, students will not be able to see their own adversity scores.

The so-called adversity score is a number from 1-100. A score of 50 describes “average” adversity, and numbers above 50 indicate an above-average level of adversity in a student’s life.

The rating is calculated from 31 equally-weighted factors, which are listed in full on the College Board website. These factors can be roughly sorted into three categories:

50 colleges participated in a pilot program this past admissions cycle and offered feedback on whether the adversity rating was helpful. Florida State University stated that the use of the adversity score boosted non-white enrollment from 37% to 42% of the admitted class.

The introduction of the score has generated controversy in the world of higher education. Many educators have connected the College Board’s latest move to the recent college admissions scandal, in which parents paid upward of $25 million to get their children admitted to such high-caliber schools as Georgetown, Harvard, and Stanford.

Some are in support of the score as a way to properly contextualize individual students’ achievements. In an article published in the Atlantic, Harvard professor Anthony Abraham Jack viewed the score as “giving us a look at how poverty and inequality directly affect students’ college destinations, as it relates to [test scores]. When students sit down [to take] the SAT, that doesn’t mean that everybody’s at the same starting line.”

Others have pointed to the “AP opportunity” factor as merely serving the College Board’s own interests, since the nonprofit organization’s SAT has been losing popularity to its competitor, the ACT, in recent years. However, higher-ranked high schools generally offer more AP opportunities, implying that more AP classes would actually result in a lower adversity score, “hurting” the test-taker.

A blog post from Top Tier Education argued for the general redundancy of the adversity score. “Much of this is already baked into how selective college admissions work, especially those contextual factors that have to do with a student’s family and school… Data [such as] curricular rigor, percentage of students qualifying for free/reduced lunch, and AP offerings — are easy to discern from the school’s official high school profile or website.”

A precedent for the “adversity score” is a 1991 SAT pilot program at Georgetown University, which assigned a rating to applicants based on racial and economic factors. Anthony Carnevale, director of the so-called Strivers program, was forced to quickly shut it down. He stated, “We got hosed. There was literally a national outcry.”

The College Board’s new program differentiates itself from Georgetown’s failed pilot program by not taking racial factors into account, at least not explicitly. However, some have argued that the score might not be a response to the college admissions cheating scandal, but rather to the Students for Fair Admissions v. Harvard court case that still awaits a resolution and is widely anticipated to reach the Supreme Court.

If the decision ends up in SFFA’s favor, then colleges will be restricted from using race as a factor in “holistic” admissions processes. The College Board’s adversity score has been viewed as a “fallback” to affirmative action, as it quantitatively describes many factors that are correlated with a student’s race.

ACT CEO Marten Roorda offered his opinion on the new SAT adversity score, as well. “The [SAT] test is not biased in itself, and the score is what it is, even though it is sometimes a messenger of what’s unequal in society, not in the student,” he wrote on the ACT’s official blog. “The test should be the equalizer, but by providing an adversity score you invite its users to adjust scores with it, starting an equating practice that undermines the equalizing effect of the score scale and invites bad behavior.” Roorda concluded that the ACT would not be following a similar path to the SAT.

This past year, the College Board’s SAT pilot program included 50 colleges. In the upcoming application season, 150 colleges will have access to their applicants’ adversity scores in order to help them choose their admitted classes.

Systems and Styles of Education