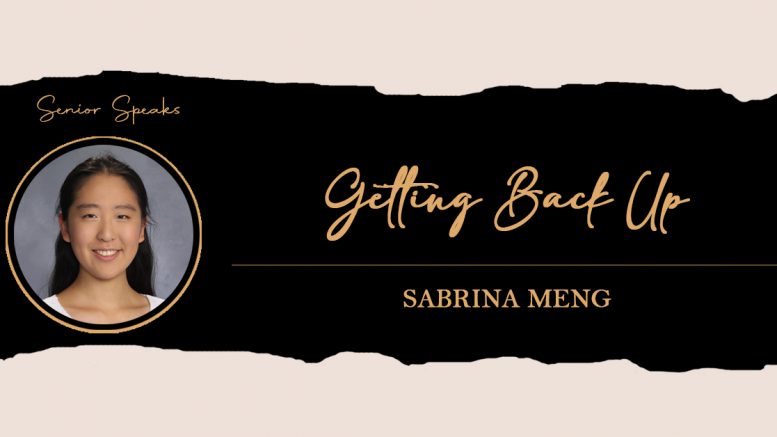 One of the sections included in the annual Senior Edition is a series of essays titled Seniors Speak. These works are written and submitted to The Acronym by members of the graduating class, allowing them to reflect on their experiences, share advice, and advocate for change. The writer of this piece is Sabrina Meng (Massachusetts Institute of Technology ‘24), who lived in 1506C during her junior and senior years. At IMSA, she was involved in Medical Society and Science Olympiad, among other extracurricular commitments.

I’ve always been falling down. Quite literally.

Given that I’m a figure skater, perhaps the above statement isn’t quite so surprising. At the end of almost every practice session, it’s guaranteed that I’ll be covered in ice, snow, and quite a few bruises.

However, after coming to IMSA, I felt that my falls had become even more frequent. No longer was it just tripping over my feet onto the cold, hard ice rink…this was a new type of falling I had never experienced before. MSI statistics knocked me off my feet and caused me more confusion than I would like to admit. The multitude of tests presented themselves as potholes in the ground, over which I tripped a few too many times. And the full-immersion language program left me in a whirlwind of words I didn’t understand for the first few weeks of class. In fact, my Spanish vocabulary likely consisted of only three words: hola (translated: hello, signaling the beginning of a mod of confusion), tarea (translated: homework, meaning that whatever followed was likely important), and adios (translated: bye, meaning I could speak English again).

But as much as I was falling down and trying to get a grip on the first semester of sophomore year, there was something different about these falls. Unlike my falls in skating, I couldn’t physically crawl right back up from these figurative falls. In fact, I really didn’t know how to get back up in the midst of the three exams, two essays, and projects that were thrown at me all at once.

As time went on, though, I began to discover my own ways of recovering, of getting back up after my falls. While dealing with a disappointing test score, finding out that an extracurricular didn’t go the way you wanted it to go, or juggling the seemingly ever-increasing mountain of work and other commitments you unknowingly signed yourself up for is never easy, there are ways to get past them.

For me, one aspect of the solution was developing a strong support system. Maybe what I needed was fifteen minutes to talk with a friend or family member about the situation because letting my emotions and concerns out almost always left me feeling better than if I kept them hidden. Sometimes, what I needed to cheer myself up was simply having a lighthearted, uplifting conversation with friends at dinner. There’s a reason why everyone says to surround yourself with positivity: it really is contagious.

The next aspect of the solution was doing something that I genuinely enjoy and love. One of my favorite ways to recover from a stressful day is going into a quiet practice room and playing a piece or melody that truly captivates me, making me forget about my concerns, instead allowing me to become absorbed into the story conveyed by the music. Other activities that I have found helpful are drawing, painting, and exercising, among many other things. Remember, it doesn’t matter what you do, as long as it makes you happy!

Lastly, and perhaps most importantly, it is critical that you learn how to channel the energy from disappointment, anger, and other negative emotions into something that drives and motivates you to do even better. While it’s understandable to feel down and upset at times, there is no use dwelling on those emotions: instead, take that frustration and turn it into productive work! Get comfortable, blast your favorite music, and remind yourself that one fall in the long path of life won’t be the end of the world. Just brush yourself off, put on a determined face, and get back up.

IMSA, along with the rest of life, will always find ways to trip you and send you tumbling to the ground. It’s an inevitable — even necessary — part of learning and growing your character, so instead of being afraid of falling and avoiding it at all costs, embrace the process of getting back up as an opportunity for self-improvement and self-reflection.

So what are you waiting for? It’s time to take a deep breath, regroup your thoughts, and get back onto your feet. You can do this!

Seniors Speak: Alhumdullilah for Everything

Seniors Speak: On Being Forgotten

Be the first to comment on "Seniors Speak: Getting Back Up"