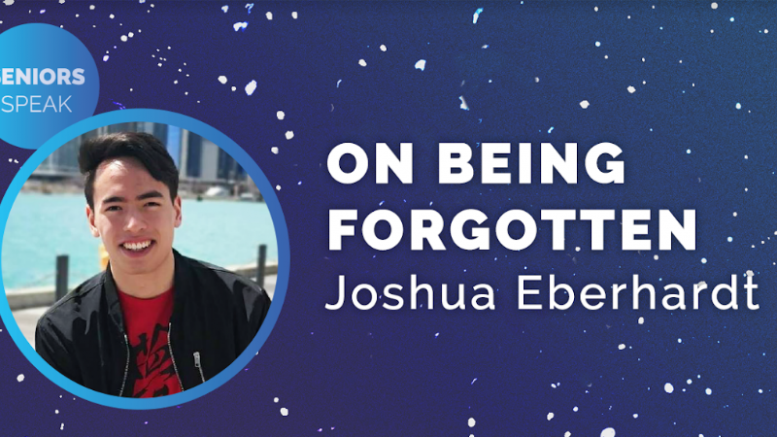 One of the sections included in the annual Senior Edition is a series of essays titled Seniors Speak. These works are written and submitted to The Acronym by members of the graduating class, allowing them to reflect on their experiences, share advice, and advocate for change. The writer of this piece is Joshua Eberhardt (Yale University ’23), who lived in 1505C for his senior year. He was 1505 CD during his senior year.

I write my name in every textbook I get. Maybe I’m drawn to the idea that years from now, some IMSA student will see my name and remember me, or at least wonder what my life was like. The signatures in the music wing are a testament to all the IMSA students who felt the same way. I can’t blame them for wanting to leave their mark. IMSA has drastically altered the course of my life. I remember move-in day, when I met my roommate for the first time and decided how to arrange the furniture. I remember countless sleepless nights with nothing for company but the dim glow of my computer screen and the clacking of my keyboard. I also remember the moments when I felt like I would never belong anywhere as much as I belonged here. And now, I’m forced to face the reality that, in a few months, IMSA will move on. Before I know it, IMSA will be welcoming new sophomores to replace me. There’s a thought experiment called the Ship of Theseus: As the years go by, some of the planks in the mythical hero Theseus’s ship grow old and are replaced with new ones. Eventually, every part of the original ship has been replaced. Although the ship looks identical, nothing of the original ship remains. In the same way, three years from now this school will have new teachers, new RCs, and an entirely new student body. Three years from now, I’ll be nothing but a distant memory.

Sophomore year, I promised myself that I would leave my mark on IMSA before leaving. But now, I know that task was always impossible. I may never forget the memories made here, but IMSA certainly will. At best, I will become an urban legend passed through the years by seniors to their sophomores, becoming more distorted and exaggerated with each iteration. My most long-lasting contribution to IMSA might just be the stain on the carpet left by spilt orange juice – a modern-day cave painting that screams “I was here!”

Recently, I’ve become obsessed with IMSA history. Every chair in this place has been sat on – every wall touched. Every hole in the wall and rule in the handbook has a story. Following Clash this year, I decided to compile a spreadsheet of the history of IMSA Clash of the Halls ever since its inception in 1998 (https://tinyurl.com/IMSAclashhistory). I reached out to the alumni Facebook page, watched decade-old drill videos to see what colors their t-shirts were, and got lost in the YouTube rabbit hole of old hall movies. Along the way, I stumbled across some hidden gems. I’ve included some of my all-time favorite hall movies below:

The last movie, Memoirs of 05, struck a chord with me. If you haven’t already seen it, I highly recommend you give it a watch. Essentially, the members of 05 A downquad set out to determine why 05 is the best hall. They interview students and teachers, eventually using their findings to write an original song. Unlike the hall movies of today that boast stunning cinematography and careful production, this movie was just a couple of kids messing around with a camera for nine minutes. I doubt any of them expected an IMSA student to discover their video thirteen years later. This slice of their lives, immortalized on YouTube in all its 480p glory, overwhelms me with a sense of nostalgia for people I will never meet. These seniors lived in the same rooms as me, sat in the same uncomfortable wooden chairs, and walked down the same path to the main building every day. Just like me, they were all too aware that their time at IMSA was coming to an end. The sing at the end of the video:

And I’ve made friends for life

No matter where we are 10 years from now

This is 05ADQ signing off for one last time

We hope that you miss us when we’re long gone

One line in particular – No matter where we are 10 years from now – planted a seed of curiosity in my mind. It’s been thirteen years since the video was uploaded to YouTube. At the time of me writing this, the creators are all 30 or 31 years old. A few of them are married. That didn’t stop me from finding them on Facebook and messaging them. I even found one of the creators, Edward Nepomuceno (the guy who wrote the song), on Linkedin of all platforms, and sent him an email. The next day, he responded:

Joshua, thanks for reaching out! It’s crazy to see this video again after all these years. Those were the early days of YouTube, another IMSA legacy. Coincidentally I am meeting up with the star of that video, Kevin Chang, today and will be sure to pass along your note. Some lifelong friends were made 1505 ADQ!

Uncovering this history has made me question why I yearn to be remembered in the first place. Is it my monkey brain’s selfish desire to be admired? Or is it the fear that I will graduate without accomplishing anything? Regardless, I’m comforted by the idea that I’m already a part of an IMSA legacy that spans generations. The creators of this movie certainly didn’t expect to be inspiring students years in the future. After graduation, they all went their separate ways, attending different colleges and finding jobs in different states. Nonetheless, thirteen years later, they’re still tied together by the inexplicable bond of a shared IMSA experience – the same experience that allows me to message them out of the blue and start a conversation. Despite the fact that 05 A downquad is now spread across two different countries and three different states, they’re still meeting up with their high school friends over lunch.

I guess this is the part where I’m supposed to offer you advice, and honestly, I don’t have much to say. The one thing I’ve learned is that you don’t have to try so hard to leave your mark. IMSA will inevitably forget you. But that doesn’t mean you have to forget IMSA. Last week, Grady Chang, the director and editor of the video, responded to my text. We talked briefly about college, the new IMSA logo, and keeping in touch with quadmates. Before we parted ways, he offered me a word of advice: “definitely make the most use of your remaining time at IMSA.”

I know it’s cliché, but your remaining time at IMSA is limited. Spend it with the people that matter. Spend it on a project you’re passionate about. Spend it making memey YouTube videos with your friends. Because one day you’ll graduate, and these memories will be all you have to show for your time here.

This is Josh Eberhardt signing off for one last time.

I hope that you miss me when I’m long gone.

[Seniors Speak] A Return on Investment

Be the first to comment on "Seniors Speak: On Being Forgotten"