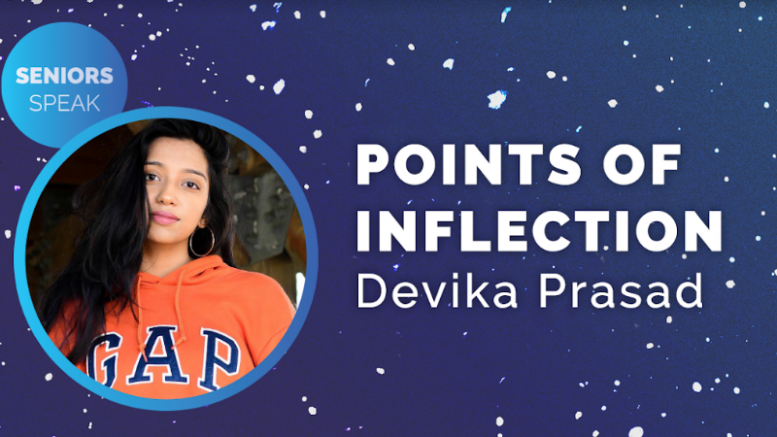 One of the sections included in the annual Senior Edition is a series of essays titled Seniors Speak. These works are written and submitted to The Acronym by members of the graduating class, allowing them to reflect on their experiences, share advice, and advocate for change. The writer of this piece is Devika Prasad (UIUC ’23), who lived in 1503B for all three years of her IMSA experience. She revived Hadron during her senior year and worked on Mu Alpha Theta.

I remember the ominous warnings of the class of 2017 – horror stories of decreasing application pools and increasing acceptance rates. The budget was broken, SIR was dying, and Clash had decidedly already seen its best days. They echoed to us what their seniors had told them: IMSA was going downhill, and there was nothing to do other than just watch it roll.

I paid unwavering heed to my seniors and daydreamed wistfully about how being born just a couple of years earlier would have allowed me to experience the esteemed IMSA I missed out on and granted me elite status as “a 90’s kid.” Our seniors’ cynical parting words made it hard for me to believe I could ever fall in love with the academy in the same way that they had.

Throughout our sophomore and junior years, our class conquered the feat of becoming seniors.  We helped sophomores at early move-in, we presented at Club Fair, we made IVC posts, and we had our turn at being the CAC’s favorite students. We embroidered our initials into the handkerchief of IMSA’s history. We were IMSA’s, and IMSA was ours.

But, officially, the Illinois Mathematics and Science Academy is an institution and, as with any institution, IMSA must do what it has to do to stay afloat. Change is inevitable, but when you claim something as your own, change becomes a lot more personal. So, throughout our two years, IMSA continued to make changes, and its students continued to criticize them.

With each new disappointing announcement, members of our class congratulated one another: “We’re graduating at the right time.”

And then I heard it again.

So, why do we say that? Why do we feel the need to forsake the place we love, give up on it as it adapts to survive?

At the cusp of our departure, we fear that the home which we have cherished will forget us and that which we have loved about IMSA will slowly fade away. I think that we use criticism to convolute how we process this fear. It’s like how fighting with your parents on a Sunday morning makes it that much easier to go back to school that night. A sense of cynicism might be the only thing that can ease the pain of our detachment and quell the anxiety we hold for the future of our home.

Even the people that you’d never think would miss IMSA will end up missing at least something about this place. Some of the most crucial years in our development are spent at the Academy; as we grew, we sunk our roots into IMSA and did as much for it as we possibly could. If we poured our everything into this place, what is left of us once we leave? Who are we once the tassel turns? Where will we find the next place we can claim as our own?

This all isn’t to say that the entirety of students’ anger with administrative decisions is unfounded – I’d simply like to distinguish between defensive cynicism and constructive criticism. If IMSA truly has consistently been going downhill for all this time, we must have already hit the bottom. And once we’ve hit the ground, there’s nowhere to go but forward and up. If SIR can turn itself around and rebuild even stronger, and just last week I heard a junior thanking the class of 2019 for making Clash fun again, perhaps we ought to have hope for shifts in the biology program and The Megadorm.

Truly, though, I don’t think the path of IMSA’s evolution can be expressed linearly. IMSA is a function of an exceptionally high order, with roots scattered all through its story. There will exist countless points of inflection through each change of direction in the cycle of convocation to graduation. Throughout each maximum and minimum, each time we fall, we will rise again.

Be the first to comment on "Seniors Speak: Points of Inflection"