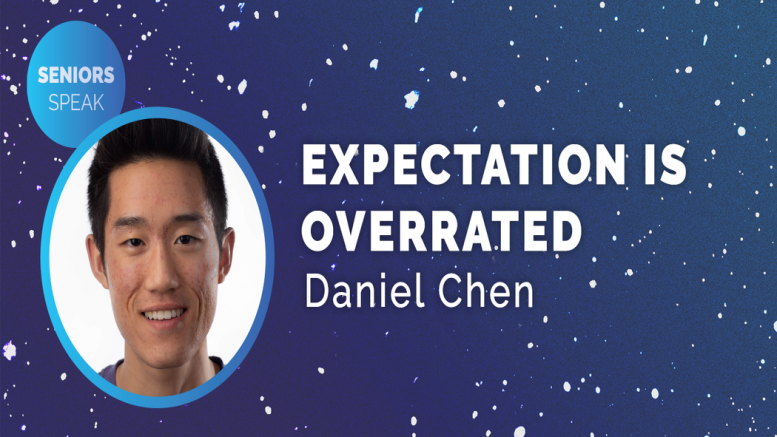 One of the sections included in the annual Senior Edition is a series of essays titled Seniors Speak. These works are written and submitted to The Acronym by members of the graduating class, allowing them to reflect on their experiences, share advice, and advocate for change. The writer of this piece is Daniel Chen (Johns Hopkins University ’23), who lived in 1504A during all three years of his IMSA experience. He was the 1600M race state champion during his senior year and a member of CAB during his junior and senior year.

Over my three years here, I’ve come to realize that there are few things we students hate and fear more than the prospect of failing to live up to expectations. Whether it comes from our parents, teachers, siblings, or peers, the consequences are all the same: we push our minds and our bodies to their absolute limits, all in a desperate attempt to live up to the standards that so-called “gods” and “legends” set before us.

I’m the oldest child in my family, so some people may say that I’ve got it easy; in a familial respect, they’re right. I didn’t have to live up to the hype or accomplishments of an older sibling. However, that’s not to say that I have zero experience with facing unrealistic and unfair expectations. In reality, it’s quite the opposite; for me, these expectations stemmed from a different source, which was my peers. Growing up in Dunlap, there was only one thing that my parents truly wanted me to excel at: math. Every day, my friends and I were swamped not by our schoolwork, but by the endless amounts of MathCounts practice problems and AMC packets that our parents would print out for us to complete. Well, I was swamped at least. Long story short, it hadn’t taken me long to realize that, no matter how hard I practiced, reviewed, or relearned, my math and problem-solving abilities were miles behind those of my friends. As I trudged through competition after competition, producing nothing but low scores and pity claps, I began to feel like more than just a failure academically; I felt like I had failed to be a good son. I had failed time and time again to meet the sole expectation my family had for me. Regardless, my parents did not violently berate or scold me for my subpar performances. Rather, they would try to hide the gloom on their faces and disappointment in their voices as I walked out of every competition empty handed, right alongside my trophy-wielding teammates and friends. To me, though, their disheartened acceptance of my inability was many times more painful than any insult or criticism.

The car rides from those competitions seemed like hours, consisting of nothing but my parents praising so-and-so, talking about how well so-and-so did, and how so-and-so is so smart. My name was never mentioned in those conversations. I spent every second of those car rides staring out the window, repeating the same question to myself:

As a runner, I’m often asked, “Why’d you choose such a miserable sport?” and I’ve always answered with a simple, “I don’t know!” But in my mind, I knew exactly why. Going into middle school, each of my friends possessed their own unique talent or skill. To this day, many of my closest friends can still probably put certain names to certain titles. One was the spelling guy. One was the cello guy. One was the tennis guy. One was the Scholastic Bowl guy. One was the biology guy. All of them were math guys. Altogether, my friend group was a walking powerhouse, a well-oiled machine of academic and artistic splendor. Then there was me. The one loose screw. The good-for-nothing-guy. Upon my realization of this fact, a gripping bitterness encompassed me, and every day that my friends celebrated an accomplishment was a day I secretly seethed in heated jealousy, screaming in my head the same helpless question:

But, things soon changed when I joined the track team. On the track, I realized that I possessed a talent that not many others had. I was appreciated, respected, and, for the first time, I felt like I was making a positive difference for the team that I was on.

Over the years, track and cross country gradually became my escape from the negativity, self-doubt, and self-deprecation that would continue to plague me throughout middle school. Every day, I vented my frustrations through our workouts, long runs, and meets. To me, track wasn’t just some miserable, arduous sport; it was my passion and my release, and I had become addicted. By eighth grade, I made the State Finals for both cross country and track for the first time. In and of themselves, my athletic performances that year were nothing to brag about. But suddenly, I found something to be known by, and the feeling of being genuinely congratulated for the first time is something that I haven’t forgotten to this day. I had become the running guy!

Sure, I was unlike my friends, and I probably still didn’t know how to do #3 on the AMC 8, but I had plenty of potential elsewhere. No one said I had to be good at everything to be successful, and my parents soon realized that the stigma of being bad at math had prevented me from exploring more things that I was good at. Freshman year, although I stayed on the math team, I no longer stressed about the scores and stats. I started exploring biology, a subject that I instantly fell in love with. I took pride in not only my own accomplishments but my friends’ as well. And, perhaps most importantly, I stopped asking myself that cursed question. At long last, I was myself, and no one in the world could tell me I was less-than.

I think that a lot of students spend too much of their high school years worrying that they won’t measure up, that they will always live in somebody’s shadow. They all seem to forget that, at the end of the day, you aren’t anyone else. No, you aren’t your Ivy-bound sister. You aren’t your 4.0/perfect SAT brother. You aren’t your neurosurgeon father. You aren’t your friend other parents call “the ideal child.” And why should you be? You are your own person, and no matter how “inferior” you perceive yourself to be, no one can be you better than yourself. You have to develop your own talents just like how those before you developed theirs. Pick passions that make you happy, not ones that you feel obligated to have because someone else set the bar really high; anyone who truly matters in your life will accept you for what you want to be, not for what someone else is. In other words, expectation is overrated; don’t let it control the way you live your life. It’s too short for that. After all, a wise man named Ferris Bueller once told me, “Life moves pretty fast. If you don’t stop and look around once in a while, you could miss it.” If you ever find yourself standing in someone’s shadow, just remember that a few steps is all it takes to walk out of it! Oh, and by the way, NEVER let people ask you:

Seniors Speak: IMSA Is Not Perfect

Seniors Speak: A B Student’s Guide to IMSA

Be the first to comment on "Seniors Speak: Expectation is Overrated"